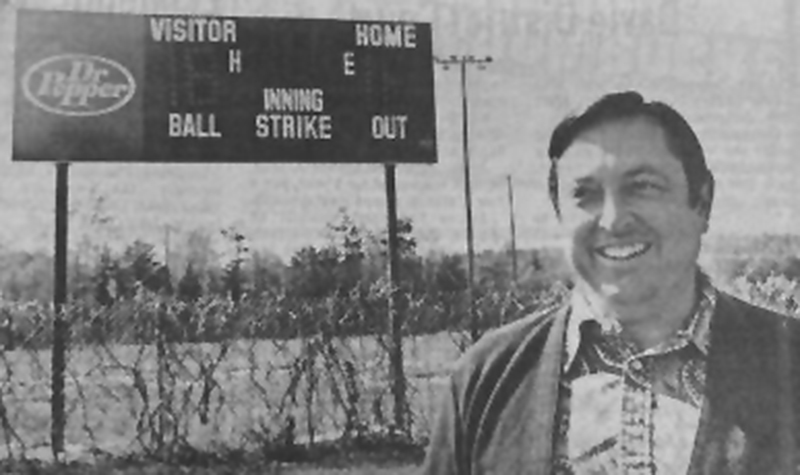 First in a series on the 40-year anniversary of the 1982 Mocksville Legion baseball team.

Perhaps you’re too young to remember when American Legion baseball was the biggest thing going each and every summer. That’s OK. Just pull up a chair and try imagining a local baseball team that – well before travel ball – attracted the best players from surrounding high schools and consistently drew hundreds of fans to Rich Park. And ask yourself if you kinda wish you’d been around to see it.

Then, in the winter of 1982, a group of inspired men teamed up to bring American Legion back to Rich Park. A Legion committee that consisted of Jerry “Chunn” Bailey, Tommy Chaffin, Phil Deadmon, Sonny Kurfees, Joe Mando, Dickie Nail, Jerry Swicegood, Steve Walker and Joe Whitlock was formed.

Needing to raise $8,000 to fund the new team, the committee ignited its fundraising drive by reaching out to a famous Major League Baseball pitcher named Gaylord Perry, who grew up in Williamston. Perry was approaching his 21st year in the big leagues, he was three victories shy of the magical 300-win mark (he would retire in 1983 with 314 wins), he was a two-time Cy Young Award winner and he was a shoo-in for the Hall of Fame (he was inducted in 1991).

Perry made an appearance at South Davie Junior High School on Feb. 13, 1982, a little more than three months before Mocksville’s opening game. The Enterprise billed the evening of entertainment “as an All-American Baseball and Hot Dog Night, as ‘ballpark’ franks with all the trimmings will serve as the main course for the event.” The cost for adults was $2.50, while students were admitted free.

The festivities began with an autograph-and-picture session with Perry at 5 p.m. Those who wanted pictures were advised to bring their own cameras. The hot dog supper got underway at 6:30, followed by the main speaker, Perry.

The Enterprise wrote: “With baseballs in hand, fans stormed South Davie and waited patiently for a chance at Perry’s autograph, and Perry enthusiastically greeted fans who were allowed entrance into a secluded area one at a time with an opportunity to chat with Perry and get the autograph of the acclaimed pitching star. Perry was known for throwing the most infamous spitball in major league history.”

Charles Kurfees, who just began his 12th year as the Mocksville Senior Legion coach, was 14 at the time, and he tagged along with his father Sonny.

“That was the first official meeting that they had to kick off the American Legion baseball team in 1982,” Charles said. “They had hot dogs, apple pie and Gaylord Perry. I remember he said he didn’t know who he was going to play for the next season, and I remember I had a bet with my buddy Kirk Edwards. Gaylord had a T-shirt on underneath his shirt. I could plainly see an Atlanta Braves logo. Somebody said: ‘Well, who do you think you’ll play for next year?’ He said: ‘I don’t know.’ One of the guys said: ‘Well, why do you have a Braves T-shirt?’” (The T-shirt proved to be misleading. Perry played for Atlanta in 1981, but that was his only season with the Braves. He pitched for Seattle in 1982.)

The MC for the special night was Swicegood.

When it comes to Mocksville Legion baseball, Charles Kurfees remembers everything about everything, even the details from a February night 40 years ago.

“Jerry Swicegood was the MC,” he said. “Gaylord Perry and coach (Joe) Ferebee spoke. Dub Potts was also there that night. He was the head coach at Thomasville at the time. All those kids were around (Perry) getting autographs in the media center. In the cafeteria they had hot dogs, donations and all that stuff. Then they moved everything over to the theater where he spoke. Yes sir, I remember it just like it was yesterday.”

Rich Park needed a scoreboard and Pepsi-Cola in Winston-Salem donated a new one to the program. Nail, the president/general manager of the Mocksville-Davie Youth Baseball Association, flashed a big smile as he stood in front of the scoreboard for a photo.

Rich Park had a chain-link fence in those days, and it had been overcome by honeysuckles.

And then: “One of the best baseball minds was James Edwards. Him and Dale Ijames were a lot alike. ‘Chunn’ Bailey was a big-time Little League baseball guy in Cooleemee.”

Gaylord Perry Night was a successful event, but there was still a financial shortfall as the season approached.

“I know who secured the loans at the bank,” Kurfees said. “Three people put their name on the loan to get everything started.”

There was an important question that winter: Who’s going to coach the team? Mocksville tabbed Ron Morgan, who was a 38-year-old resident of Advance with a varied athletic background. Morgan played football, basketball and baseball at Northwest Forsyth High and earned baseball/basketball scholarships to Oak Ridge Military College. He had coached in football/basketball/baseball youth organizations the past six years and had played softball for the past 15 years. He was employed by the U.S. Government Department of Defense as a Flight Operations Specialist in Salisbury. He was married with two children.

“He was coaching in a 13-, 14-year-old league in Davie County and he played professional softball with Poindexter Lumber Company (of Clemmons),” Kurfees said. “He was a great motivator and all that. It seemed like there were three or four people they interviewed for the job.”

Dan Marion was named assistant coach. The first practice attracted 25 prospects from four high schools (Davie, West Forsyth, Reynolds and Forbush). A sizzle was in the air as Mocksville prepared to play 18 regular-season games in a span of 38 days. The bat boys were Matt Marion, who was 10, and Ron Whitlock, 14. Sean tickets were $10 per adult and $5 for students over 12/senior citizens.

“I can name the whole team. You ready?” Marion said. “You’ve got Scott Vogler, Barry Whitlock, David Folmar, Todd Cassidy, Mike Wilcox, John Bivins. You’ve got Jeff Burton. He played third base. Kenny Riddle was catching. I’ve got a picture of that team. I got an autographed ball from that team.”

“I’d sit over there on the bench and chewed bacco with them,” Marion said. “Those boys back then were dipping that Hawken. I tried it. I was like: ‘Yeah, it’s alright.’ That will burn your lip, boy. I had to stick with Red Man.

“I still have a Mocksville jacket hanging on my wall. I’ve also got my bat boy jacket. All the kids that drove down from Yadkin County would meet us at Miller’s. That’s where the bus would pick everybody up. After the game, I remember looking forward to getting a hot dog and dad and I riding home at midnight.”

Marion loves to tell a story about Burton.

“I remember clear as day when Jeff Burton threw that ball out of Catawba,” he said. “He was standing on the pitcher’s mound and threw it over the left-field foul pole and it was gettin’ it. That boy chunked it. I think it’s still going. He got called for a balk. He had a runner on second and he turned his foot way back across the plane of the rubber. (The umpires) gave the runner third base. Ron Morgan and dad (Dan Marion) were sitting there and they said: ‘Do it again.’ He did it again and they gave that boy home and the cowbells started. That’s when Burton threw it up in those trees. Of course, they threw him out. As a matter of fact, you could listen to it the next day and the announcer – and this is a quote – said: ‘And Burton throws the ball into the woodsy area of the ballpark.’ He called it the ‘woodsy area.’”

Marion also vividly remembers Ferebee’s Rowan County team lining up for the National Anthem. Ferebee, a Mocksville native who passed away in March of 2020 at age 101, had 1,361 college/Legion wins during his extraordinary career.

“I’ll tell you something else I remember about that game,” he said. “My dad had an immense amount of respect for Joe Ferebee. He said: ‘What these guys.’ They came out for the National Anthem. I’ll never forget that as a kid; that was very impressionable for me. You know how a lot of teams come out and they straddle the chalk line. Those guys put a toe on the line and they stood there and they’re all angled. It was military, buddy. When the National Anthem started, they had their hats in their right hand and that sucker went straight to their heart – boom. I looked at that as a little kid and my eyes got big. I thought: ‘I like that.’”

The 1982 season produced an epic Fourth of July playoff game at Rich Park. A landmark grand slam left Hardister’s bat in the bottom of the ninth inning.

“That was a helluva team in ‘82,” Kurfees said. “One of the greatest games ever played at Rich Park was July 4, 1982. The season was (nearly) over with two outs, 3-2 count and Hardister hits a grand slam. Playing Statesville in the first round of the playoffs. It was unbelievable. Man, that’s what really started it off. That Fourth of July game is what got all the crowds so big back in those days.”

As Mocksville approached the May 20 opener against visiting Lexington, something special was brewing. One of Davie County’s all-time greatest sports stories was about to begin.