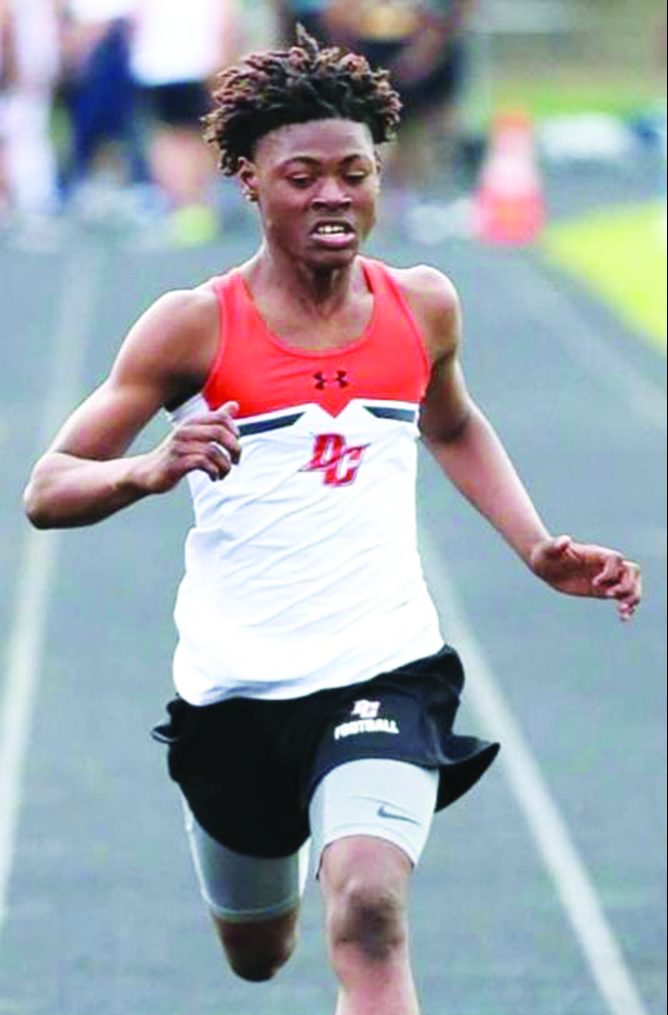 The Davie track team closed out its season Saturday at the 4-A state championships held on the campus of NC A&T in Greensboro. War Eagle senior Spencer Williams was a one-man wrecking crew as he brought home two gold medals, a state meet record and a 10th-place team finish. It was the second consecutive year that Davie claimed a top-10 finish after finishing eighth a year ago.

Each of the four regions across the state were represented by four individuals or relay teams as 16 total entries comprised the field in each event. Battling hot and humid temperatures that saw the mercury sail toward 90 degrees, the shot put competitors took center stage at high noon. Coming off an all-time state record on his home turf the week before at regionals, Williams was a heavy favorite to win both throws events. On this day, however, there was quite a bit of drama at Aggie Stadium.

As the top seed, Williams got to throw last among the 16 competitors. Sun Valley’s Delmar Chambers, a N.C. State signee, laid down an early marker with a throw of 58-2. Williams then stepped into the ring and took the lead with a conservative effort of 58-4. In the preliminary round, each athlete got three throws. The top nine athletes after the prelims then advanced to the finals where they are rewarded with three more attempts.

The Davie senior stuck to his usual strategy of getting an early mark in the books to assure a place in the finals. Then, however, things got a little tense. Although Chambers was not able to improve his best throw over the next four attempts, Williams found himself out of sorts and fouled on four straight throws.

On the sixth and final throw of the competition, Chambers was again unable to improve on his first mark, thus assuring that Davie would take home the gold and the all-important 10 team points.

With all of the pressure removed from his massive frame, Williams then unleashed a herculean throw of 64-3.75. That mark proved to be an all-class state championship meet record, surpassing the previous record that had been set 47 years ago in 1975. The mark was also just shy of the all-time state record of 66-2 set by Williams the previous week. Williams now has the four best throws in North Carolina state history, having added nearly three full feet to the previous record.

After a two-hour respite, the competitors in the discus moved into the spotlight. Williams, a UNC signee, was again the overwhelming favorite to bring home another gold medal. Battling a steady crosswind, Williams fouled on his first attempt. On his second effort, the Davie senior left no doubt as to who the eventual champion would be. A throw of 180-4 ended up being over 10 feet clear of Chambers and the rest of the field. As they headed into the finals, Williams had his sights set on the state meet record of 189 feet. A throw estimated to be close to 190 was wiped off due to a foul, but as the competition came to a close, Davie had notched another 10 team points.

“Coming into the season, one of our goals was to place in the top 10 again like we did last year,” said coach Rob Raisbeck. “Since Spencer was our only qualifier, everything had to go perfectly for us to achieve that goal. And fortunately for us it did. We were 11th in our regional meet, but the bigger the meet the better we will generally finish because we can count on Spencer to win two events.”

With over 100 4-A schools statewide, nearly all of them were represented by at least one athlete. A total of 63 schools notched at least one team point. Cuthbertson edged Mt. Tabor 57-52 for the team championship. Davie’s 20 points placed it 10th. The War Eagles were sixth among teams in the Midwest Region and second among CPC teams.

“Our region is incredibly difficult,” said Raisbeck. “Eight of the top 14 teams came from the Midwest. When we saw how schools were realigned this past summer, we knew this was going to be the case, but it just means we have a bigger challenge each year to stay among the elite teams in the state. Looking forward, we will continue to give our students every opportunity to develop their talents. We sent five athletes to indoor nationals in Virginia Beach in February. Spencer was Adidas National champion in the shot. His brother, Cooper, won the freshman division in the shot. Bryson Robinson took fourth in the high jump and Monica Long was a top-10 finisher in her division in the shot. We also sent Reece Yount to cross country nationals in Alabama. We look forward to adding Austin Sweet to the roster next year. He was runner-up at indoor nationals in the middle school division in the pole vault. He has already cleared 12 feet, which would qualify him for states indoors.

“We have a bunch of young athletes that show promise in the sprints and field events. Our distance program also continues to get stronger. We had a record number of eight of our runners break five minutes in the 1600. I was frankly worried about the cross country team this coming fall since we lose a bunch of seniors, but we have four freshmen who really bought in and have improved dramatically over the last six months. To be competitive we will really have to rely on these rising sophomores to take the next step in their training. We will have our cross country interest meeting May 26 at the Davie cafeteria at 4 p.m. and will start planning our summer training program. We invite any middle school or high school student interested in our program to contact me at DCXCCOACHROB@GMAIL.COM. Coach Sweet will also be continuing with his summer track program and is looking for new recruits as well. “