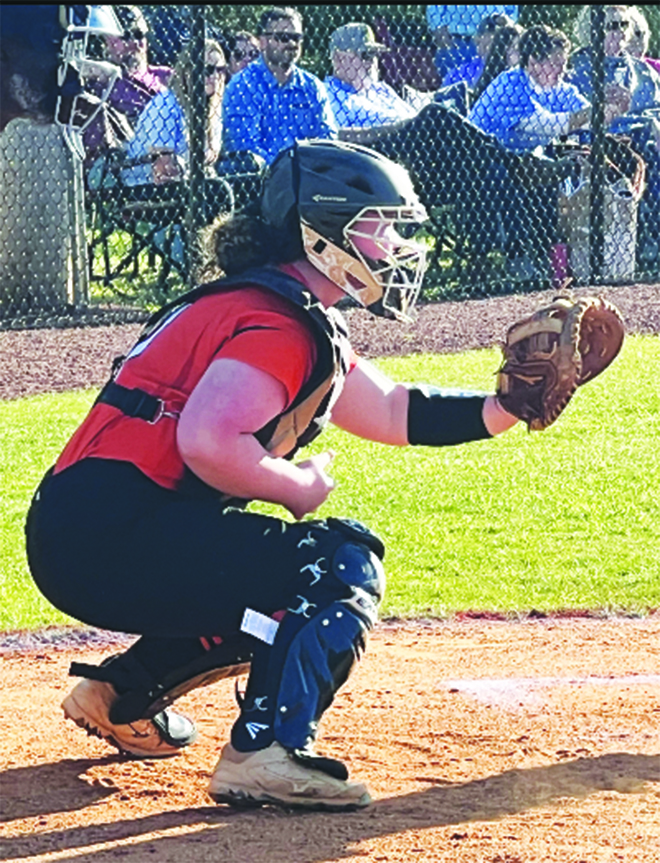 Davie’s softball team seemed overwhelmed in the first inning of the first-round playoff game at Piedmont on May 10.

The War Eagles were down 5-0 after the first. The rest of the game proved they could compete with the Panthers, but the damage had been done in an eventual 6-2 loss in Monroe.

Davie’s coaches had to ask a lot of Riley Potts. Freshman Raelyn Lankford was going to get the start in the circle, but she suffered a leg injury the day before the game. Instead of Lankford making her ninth start, it was Potts, also a freshman, who was thrown to the wolves for her first start after making eight relief appearances.

Potts gave up five hits and a walk in the first – with a Davie error mixed in – as the Panthers jumped to the big lead. But the way Potts responded from the second inning on could catapult her forward from 2023-25. After Piedmont scored one in the second, Potts put up zeroes in the third, fourth, fifth and sixth. It had just three hits after the first.

“Riley was trying to place the ball early, and she was leaving them fat and they were hitting it,” assistant coach Fred Smith said. “I called time and went out and talked to her. I said: ‘Just throw it. If you throw gas, your other pitches will work.’ Then she flipped the switch and only gave up one run the rest of the way. Riley did well. I think she built some confidence.”

Sydney Dirks and McKenzie Mixon cracked home runs for Davie. That was nothing new; the War Eagles hit a program record 33 long balls for the season. But they could not break through against a pitcher who has committed to Wingate.

S. Dirks launched the first pitch of the fourth over the fence to put Davie on the board. In the seventh, Mixon went deep in her final Davie at-bat. Davie produced baserunners in every inning except the third, but it could not string anything together.

“Their pitcher spins it pretty good,” Smith said. “But top to bottom, we were better than that team. We just hit it to people.

“Sydney killed it this year,” Smith said. “I’ll give her some instructions about what the pitcher is doing, but I don’t give her what you would call hitting advice. I let her do her own thing. I’ll say do your thing, and she typically does.”

Davie careers ended for four seniors. The most decorated is London Dirks, the older sister of Sydney who will play at UNC-Charlotte next year. L. Dirks was a middle-of-the-order slugger for all four years.

“It’s going to hurt losing her,” Smith said. “I think London would have broken some records if she would have had four full seasons. When she’s in the box, she has a dominance that you don’t see much. She strikes fear in people when she steps in there. Because of that, I think she will make an impact at Charlotte immediately. She’s got the offense figured out. She’s a hard worker. They don’t come around very often (like her).”

Mixon, who missed all of her junior year with an injury, came back strong in 2022 and matched S. Dirks with six homers. She has a softball future at Surry Community College.

“In the second half of the year, she was an every day starter and she produced,” Smith said. “I think she’ll do well at Surry.”

The other two seniors will also play college softball. Kaylyn Nuckols and Bailey Snow are headed to Methodist.

Notes: Davie was the 20th seed in the 32-team West Region. The Panthers were seeded 13th after tying for first in their conference. They bumped their record to 19-6. … In the second round, Piedmont lost 2-1 in eight innings to Mooresville. … Davie finished 15-9. … In first-round games involving Central Piedmont Conference teams, East Forsyth won 7-2 over West Cabarrus, West Forsyth won 17-1 over Ardrey Kell and Reagan lost 5-4 to A.C. Reynolds.