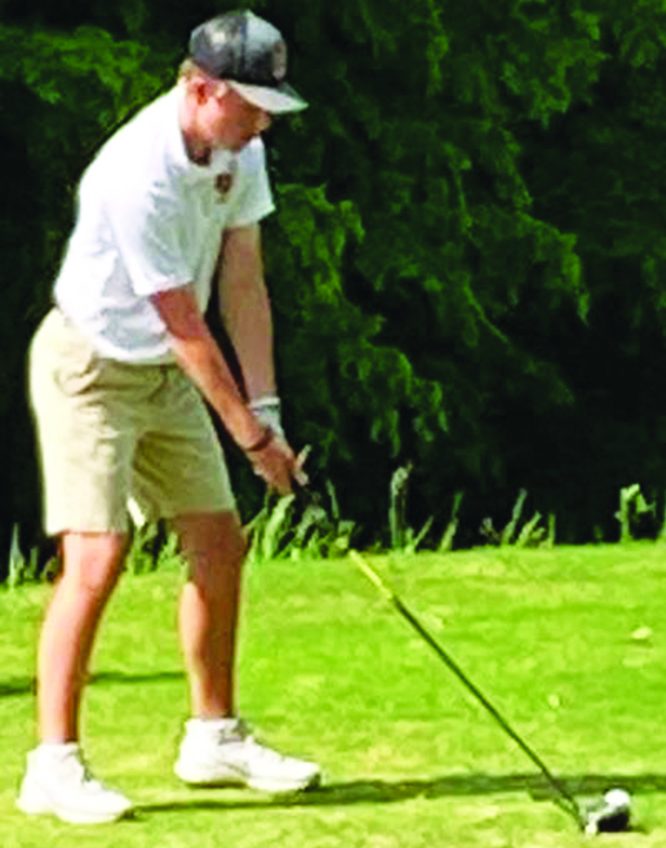 Freshman Anderson Beliveau tees it up.

An out-of-nowhere Anderson Beliveau, who did not finish in the top 13 and thus missed out on the all-conference team, shot a 7-over 79 in the Midwest Regional at Oak Valley on May 2.

The War Eagle tied for 39th place out of 81 golfers. What made the round all the better was he tied for 11th among Central Piedmont Conference rivals. But here’s why his showing was an exceptional accomplishment: Beliveau was the third-best freshman in the field.

Freshmen Hayden Magnussen of Northern Guilford and Preston Howe of Reynolds shot 72 and 74, respectively. Beliveau was the next freshman. The other three ninth graders shot 81, 84 and 88.

Only six freshmen were on the course, and yet, guess what? Beliveau came out of the gates with six straight pars.

“I hit a good tee shot (on the first hole), considering there was all those people watching,” he said. “I was really nervous. I mean, I was having trouble putting the tee in the ground. My hands were shaking. I got over it and it was awesome.”

And then: “I was feeling good (after six holes). I was playing with two really good players and one of them is a good friend. Honestly, it didn’t feel like a huge deal. I know it was but I was relaxed.”

Beliveau double bogeyed No. 7, but that was his only hiccup of the day. He finished with 12 pars and five bogeys.

“I was still in control of my game (after the double bogey),” he said. “It didn’t really get a hold of me. I went back to making more pars.”

He had an amazing performance without making any birdies.

“I had a lot of looks at birdies,” he said. “I hit a lot of good wedge shots, but my putts were just not rolling in there.”

“Oh my gosh,” he said. “It was up there. It was definitely up there. There were so many people watching. When I get on the back nine, my whole team is watching, and that was something, too, looking back and seeing the crowd. It was really special. I had my coaches following me, which was pretty cool.”

Beliveau was the first Davie freshman playing in the regional in 13 years (Tommy Dillon, 2009). The cutoff to qualify for the state tournament was 76, so Beliveau missed that mark by three strokes.

“I’m looking forward to next year,” he said. “I’m going to spend all summer hitting balls and getting ready for next year. I really wanted to make states, but it was an accomplishment just making it to regionals. Now I can go into next year knowing what to expect and knowing what to shoot. It was a good experience.”

Notes: Beliveau might have overachieved after averaging 40.2 strokes in 11 nine-hole matches, but he showed what he’s capable of when he shot 5-over 77 in the CPC Tournament at Maple Chase, which was good for a tie for ninth place. … Oak Valley played at 6,499 yards. … The scores for the 13 teams that competed: Reynolds even-par 288, Marvin Ridge 295, Page 301, Northern Guilford 306, Weddington 311, Reagan 312, Cuthbertson 312, Northwest Guilford 313, West Forsyth 314, Grimsley 322, Lake Norman 324, Cox Mill 328, South Iredell 332. … The medalist was Ragsdale senior Jack Boyer (69). … Living in Bermuda Run, Beliveau has grown up on the golf course. “We had a house right by the range (before moving to another house in BR),” he said. “I mean, it was a couple of steps away. It was right there. It was awfully convenient. We moved and I’m still within walking distance. I know my neighbors real well and they don’t mind me walking through their yard, then walk up a little hill and up to the range every time I go up there.”