No rain, no rainbows; but cornhole tournament goes on 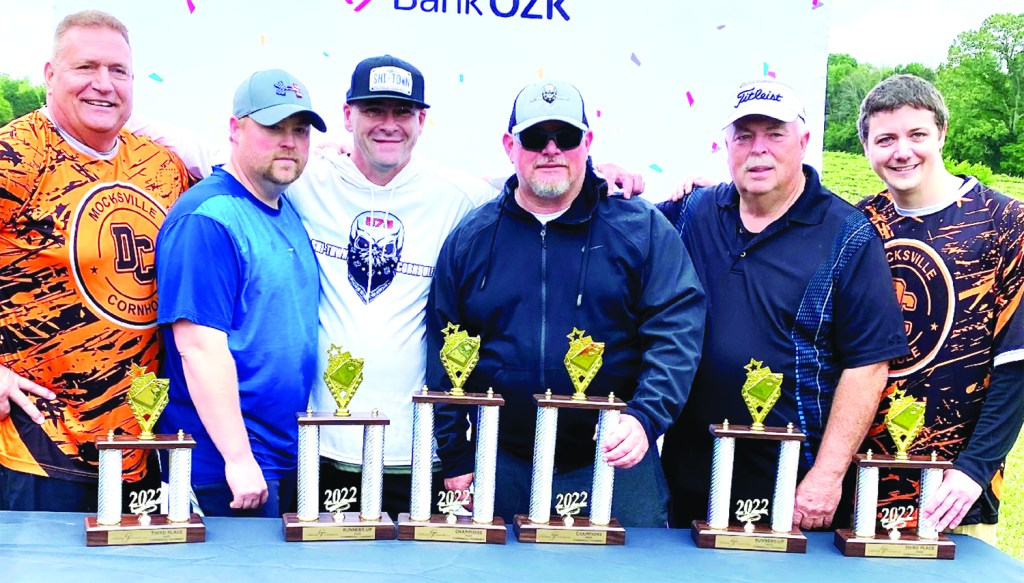 Anyone who says sunshine brings happiness has never played cornhole in the rain.

The second annual Gilliland Foundation Cornhole Tournament lived to the buildup and brought out a crowd of more than 250 people despite the weather predictions.

“Our only focus was to embrace the rain throughout the day because we knew our ultimate rainbow was to provide support and hope to children being treated for cancer,” said Gilliland Foundation board member Brian Myers.

The Gilliland Foundation Cornhole Tournament, presented by Bank OZK, featured a record number of teams, with Kevin Lemons and Jeff Johnson winning the championship. The father-son team of Roy and Troy Huss captured second, and Travis Gentry and Benny Shaw finished in third by defeating Dean O’Neal and Jerry Smith, who finished fourth.

RayLen Vineyards & Winery once again hosted the tournament, which will be the permanent home of the annual tournament every May. Next year’s event will take place on May 6.

“The support for the tournament has been remarkable,” said foundation board chair, Diane Gilliland. “This year featured three new board and bag sponsors – Bandy Insurance Agency, CKJ Building & Design, and Rivers Family Dentistry. We have a waiting list for cornhole board sponsors. This would not have been possible if it were not for the generous backing of presenting sponsor Bank OZK, silent auction sponsor Penry Terry & Mitchel, and entertainment sponsor Overhead Door Company of Greensboro. BCM Enterprises, Candido Landscaping, Carolina Center for Eye Care, C&C Pool Service, Dave Marley, Davie Construction, EXG Brands, Lance’s Fine Art, Mid Carolina Diesel, Piedmont Advantage Credit Union, Primeau Productions, Trailers of the East Coast, and Weathered Rock once again supported the tournament by sponsoring cornhole boards that were customize designed with their respective colors and logos.”

“Thank you to our sponsors, the people who registered and paid to play, attendees who bid on silent auction items, and the wonderful association with RayLen Vineyards and Winery, who supported our annual cornhole tournament. We are humbled and grateful,” said board vice chair, Ann Logan. The annual tournament benefits children who are battling cancer.

For more information on the foundation, visit https://gillilandfoundation.org.

Big checks presented by SURF board