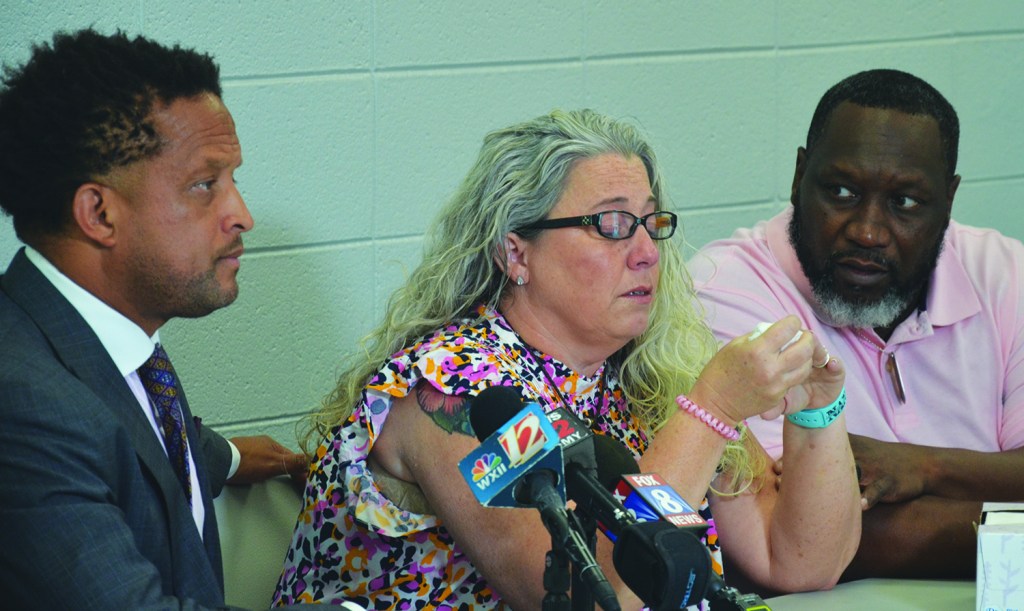 Flanked by attorney Marwan Porter and husband Thomas Stuckey, Christena Stuckey talks about her daughter and her family.

The families of the four people who died on Monday, April 18 near Cooleemee are speaking out.

One has hired a high-profile attorney.

The other is working with a civil rights activist.

“The family and this community need to know exactly what went on,” said Marwan Porter of The Porter Law Firm in South Florida during a news conference Tuesday afternoon in Mocksville. The family of Ashton Brown hired the firm to investigate what happened.

According to the Davie County Sheriff’s Office, around 2 p.m. on April 18, Aschod Meeks-Ewing shot and killed Brown and their two children, Bella, 4, and Brixx, age 8 months. He then turned the gun on himself and set their home on fire.

Porter said the firm was hired to investigate how and why this happened, and most importantly, to make sure it never happens again.

The family had visited the sheriff’s office under two hours before the incident, and a sheriff’s deputy had talked with Ashton and Aschod several times prior to the tragedy. Davie Sheriff J.D. Hartman had said the family had produced no warning flags that they were in danger.

“When someone is crying out as loud as they can for help, those cries have to be listened to,” Porter said. “When things happen, they cannot be handled lackadaisically. In some ways, portions of this community failed her,” he said of Ashton.

Porter said a lawsuit is not the goal if the sheriff’s department is willing to cooperate. That may mean admitting that someone dropped the ball, he said, saying the firm will look at all policies and procedures to not only be sure they were followed, but to be sure they are adequate.

He said Ashton was timid when the family visited the sheriff’s office. “She made multiple calls to authorities and unfortunately, they did not respond.”

“You have to take accountability when you screw up, so it doesn’t happen again,” Porter said. “It’s very clear that the ball was dropped. How was that ball dropped? Who dropped it? Something went wrong and it ended in complete and utter tragedy. You can’t just move on and forget about it, or it will happen again.”

He said a lawsuit would be initiated if the family doesn’t receive the answers it needs to hear, “ … against any and all people with responsibility if it comes to that … if someone has done wrong.”

“The first step is to understand what happened and why. That’s why were are here, to get answers and closure for the family. It cannot be swept under the rug. We want to see what the Davie Sheriff’s Office did right and did wrong.

“They were asking to speak to an officer. Why didn’t an officer come out and greet the family?

“Everyone deserves to know what happened. This is something that affects the whole community.”

Flanked by her husband Thomas and her three other children, Christena said that she was very close with her daughter and grandchildren, and spoke to all every day.

“I could tell by her body language (that something wasn’t right after reviewing video recordings of the sheriff’s office visit),” Christena said. “She never left the rug until he (Aschod) told her to come to the window. Why would she even get out of the car with a sleeping baby? Everything she told to the receptionist she was told to say.”

Christena said her daughter loved her family, and playing softball, and she met Aschod in college in Raleigh. She was a softball player, he a football player. When she moved back to Davie County, Aschod moved here with her and fit in well with the family. The day before the incident, Aschod and Ashton and the children were at her house all day for Easter, and nothing seemed out of place.

“She was just amazing,” her mother said. Ashton enrolled in Winston-Salem State University to earn a teaching degree after moving back to Davie.

“Most importantly, she was an amazing mother who loved her babies. They were her everything.”

Ashton’s children? “They were the best part of her,” Christena said. “Bella was 4 going on 14. She was so smart, her vocabulary was like an adult. Brixx, he was pretty much the same way. He wanted to be like his big sister and she was so proud of that.”

An earlier news conference in Raleigh was held by Aschod’s mother, Tiffany Meeks, and John T. Barnett, a civil rights activist from Raleigh.

She said her son had suffered concussions playing high school football, and had experienced mental illness since that time.

Her son did like not the police, so it was surprising that he would go to the sheriff’s office in the first place, she said.

“So for him to go and ask for help, and call multiple times … yet it fell on deaf ears,” Barnett said.

She said her son loved to play football, even sleeping with a football as a child. He was a running back for SE Raleigh High School where he suffered two, maybe three concussions. His mental condition deteriorated after that, she said.

Last year, she was able to get him committed into a mental hospital due to extreme paranoia, suicidal thoughts and nightmares. “I’ve tried to get assistance for him. He had impulses; I have been trying to get him help for years.”

She asked the medical examiner to test for CTE (chronic traumatic encephalopathy) but is not sure if that test was performed.

“There was neglect on the part of the Davie County Sheriff’s Office. They’re not all bad police, but mistakes were made. Calls were made, addresses were given.”

The family had given police their address, as well as the address of Ashton’s mother.

“He (Aschod) was screaming out for help without the sound. The thoughts that he had were obviously taking over and he was trying to get assistance.”

There were six dropped calls yet no officer went to the house, she said.

“If one officer or one receptionist had taken the time to listen, or call an officer off the street for a while, a whole family may still be alive,” she said.

“I’m warning mothers. I’m warning fathers. There’s an impact, them blows to the head. It ain’t all about football. Life is more precious than a freaking football,” Barnett said.

“There was some neglect,” Meeks said. “Separate them. Talk to them. Take the time to listen. Had they taken the time to listen, or call an officer to speak with the family, we would not be having this conversation today.”

The family plans to establish a foundation on July 14 (Aschod’s birthday) for others suffering from CTE.