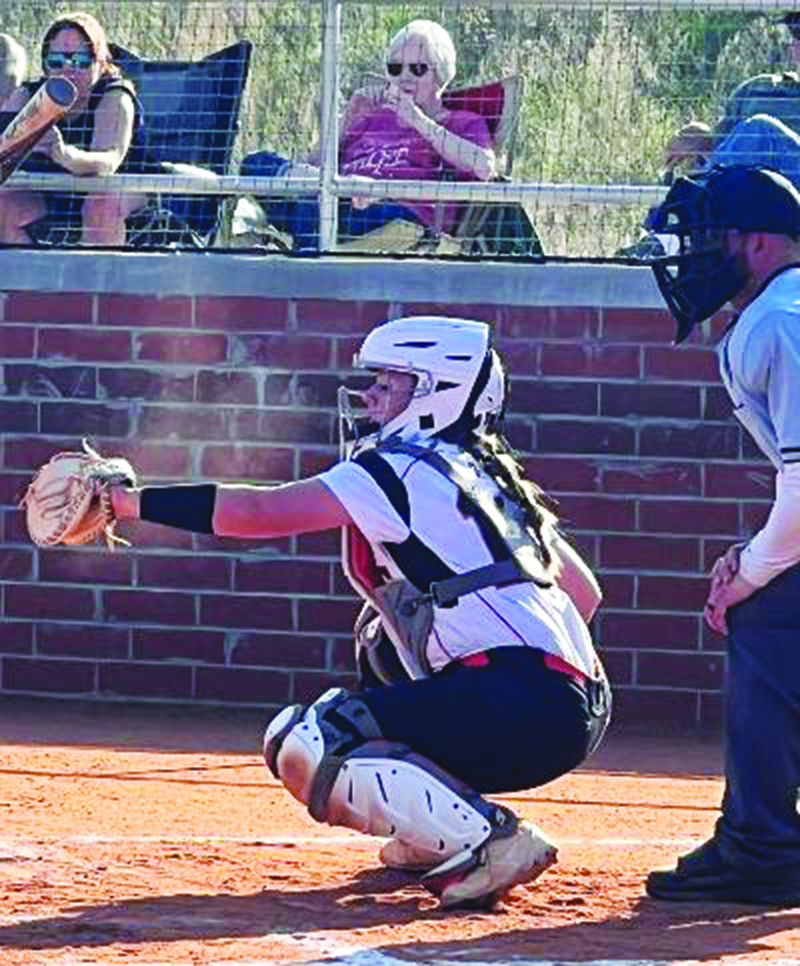 Davie’s JV softball team made a statement at West Forsyth on April 22. After losing 8-3 to the Titans in March, the War Eagles demonstrated their growth by whipping West 13-4 in four innings.

“We’re coming together,” coach Nathan Handy said. “Finally the pieces are coming together. People are playing out of position because we’ve had injuries, but we’ve worked hard and it’s really showing.”

After a scoreless first inning, the War Eagles poured across five runs in the top of the second. Tytiana Norris, Cora Nicholson, Delaney Parsons and Brayden Brooks had hits, Ashley Smith and Gracie Garwood reached on errors and Hanna Steinour walked as Davie took the commanding lead.

West loaded the bases in the home half of the second, but a golden defensive play by third baseman Garwood and catcher Steinour kept West off the scoreboard. They turned a 5-2-3 double play.

“Gracie made a fantastic play,” Handy said. “I pulled her in a little bit and she fielded the ball cleanly, threw it home to Hanna and Hanna got the out at first (with a throw to Riley Potts).”

Davie’s lead reached 9-0 before West got on the board.

Steinour rode a pitch over the fence in left-center, representing the only homer of the season.

“Hanna is coming back from an injury (ACL),” Handy said. “When she showed up for tryouts, she had just been cleared. So she’s been working her way back. Over the past three weeks, she’s been showing she’s got the bat and the power to be able to do that.”

Davie’s defense behind Parsons couldn’t have been much better.

“We played really good defense,” he said. “Our infield (which included Smith at shortstop and Nicholson at second) played their best game of the season. Ashley had a lot of assists. A lot of balls were hit to shortstop and she did a fantastic job.”

This was Davie’s first game in a month.

Davie hung with visiting Oak Grove for four innings, but the Grizzlies were ultimately superior on April 26.

Parsons had a one-hit shutout going through three, but Oak Grove would hit another gear, starting with a four-hit, two-run fourth.

“I think they figured out what I was trying to do with Delaney,” Handy said. “They did a good job of adjusting and they started hitting the ball.”

Davie got one back in the bottom of the fourth. Steinour walked, advanced on Smith’s bunt and scored on an error.

“Ashley laid down a perfect bunt,” he said. “Oak Grove left third base open and Hanna was able to come around to third. Then they overthrew the third baseman.”

On the bright side, Smith showed off her skills again at short.

“A lot of balls were hit to Ashley and she made the plays,” he said. “She was playing her heart out.”

Davie wrapped up the season by steamrolling West Rowan in three innings on April 27.

“We’ve had several injuries and have had to move kids up and down between varsity and JV,” Handy said. “We’ve had kids playing positions they’ve never played before. To come out at .500, it was a successful season. If we could have had this team for six months vs. two or three months, we would have been solid. Everybody improved. From top to bottom, we got better and that’s what JV is for.”