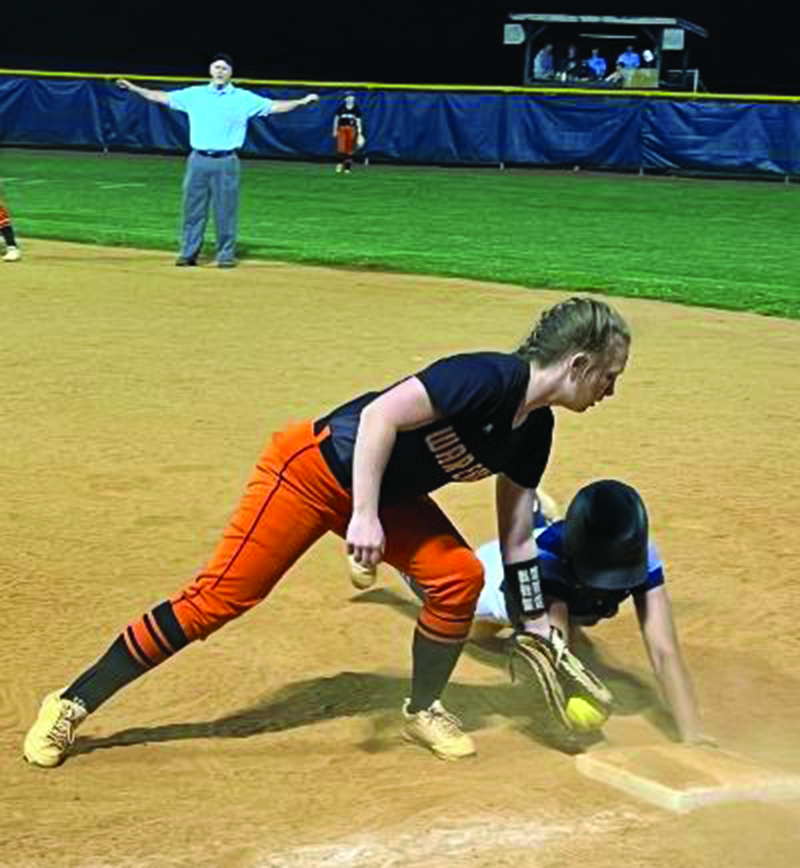 London Dirks hit a record-setting home run for Davie’s softball team, the War Eagles eased to second place in the regular-season race and Sydney Dirks put herself in position for a legendary batting average.

S. Dirks, a junior who has committed to Western Carolina, is hitting a ridiculous .548 (34 for 62). If the season ended today, that would rank as the No. 2 average in the 26-year history of Davie fastpitch softball.

“Syd works hard on her swing and approach at the plate,” coach Debbie Evans said.

“We have several hitting crazy numbers,” assistant Fred Smith said. “Sydney has come through with some very timely hits. At .548 with five home runs and 34 RBIs and only five Ks, that’s about as productive as you can ask for.”

Davie winning two Central Piedmont Conference games last week in lopsided fashion was no surprise. The first one was in two and a half innings at Parkland on April 25. The Mustangs dropped to 1-12, the lone win over Reynolds.

Simpson, S. Dirks and older sister L. Dirks clubbed homers, but those powerful swings were not nearly enough against a West Rowan team that has been a thorn in Davie’s side for a while.

The Falcons mashed four homers and won going away in a nonconference game in Mt. Ulla on April 27.

But it was Davie that jumped out to a lead in the first. Simpson left the yard and S. Dirks scored on Fowler’s double as Davie took a 2-0 lead.

West homered twice in a five-run bottom of the first, but Davie answered in the third. With two outs, S. Dirks hit a solo homer. Two pitches later, L. Dirks went deep to draw Davie within 5-4.

Davie had a staggering three homers in a span of 12 batters. But then everything fell apart. It would manage only two hits in the last three innings, and West took the game by the throat in the bottom of the third. When a Falcon launched a grand slam, the teams had combined for six homers in three innings. When the inning finally ended, it was 11-4 West.

Simpson and Fowler had two hits each, but Davie was doubled up (12-6) in that category. Davie compounded its problems by committing four errors. (West had zero miscues.)

The Falcons, who are 10-2 for second place in the South Piedmont 3-A Conference, improved to 14-4 while beating Davie for the sixth time in a row.

“They have some strong hitters and are definitely a solid team,” Evans said.

Davie redeemed itself against Glenn on Senior Night on April 29, burying the Bobcats in five innings.

S. Dirks did the most damage, going 3 for 3 with three runs, three RBIs, a double, a triple and a walk.

Davie broke out to a 2-0 lead in the first without getting a hit. In the second, Glenn used three walks and a hit to tie the game at 2. Davie surged to a 7-2 lead in the second, but Glenn cut the gap to 7-5 in the third. The explosion that broke Glenn’s back came in the Davie half of the third, when McKenzie Mixon, Bailey Snow and Gobble rapped doubles to help Davie extend the lead to 13-5.

How potent is Davie’s lineup? It has people coming off the bench with home-run power. In the fourth, Ashley Bledsoe appeared as a pinch-hitter. She responded with her second homer of the season, extending Davie’s record for long balls to 30.