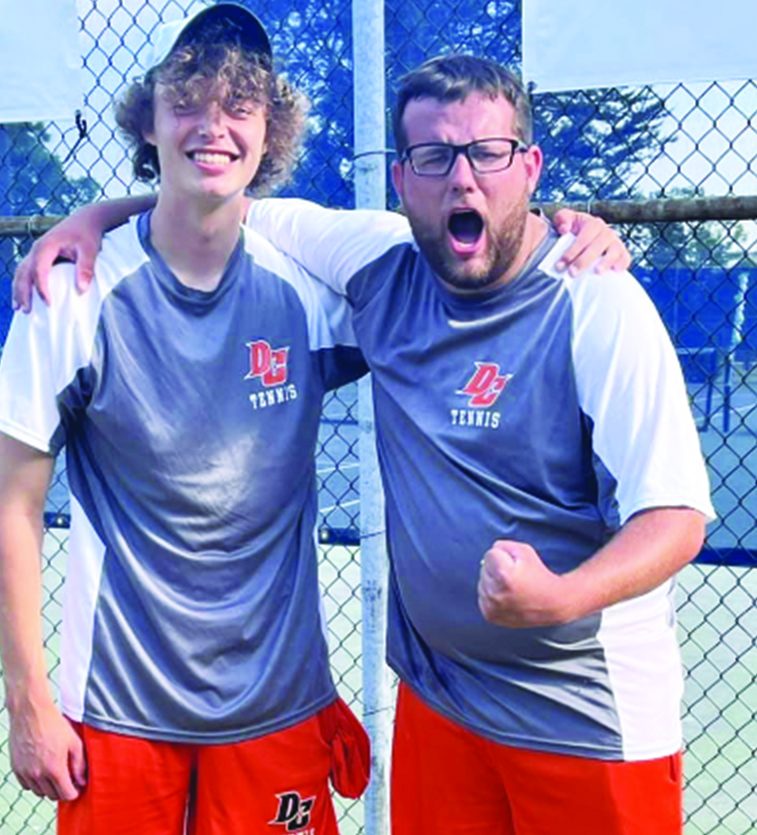 The doubles team of C Crenshaw and Burke Rosenbaum made historic hay in the tennis Midwest Regional at Grimsley on April 29-30.

“Burke and C are four wins from a state championship,” coach Shane Nixon said. “When you step back and think about that, it is kind of cool. And if you don’t win another match, you were one of the top 16 doubles teams in the state. That is really a good feeling. I know Burke and C are taking it in.”

One week after becoming Davie’s first conference champs in doubles in 16 years, the Davie duo ripped apart their first-round opponents, winning 6-0, 6-0 over seniors Alex Wells and Evan Martin of Grimsley.

They needed one more win to punch their tickets to Raleigh, and they took care of business against Page juniors Jack Davis and Grant Connors. The scores were 6-3, 6-2.

“The second-round win was the one we really wanted,” Nixon said. “(Page coach Robert Hogwood) does a great job with his guys and they sort of specialize in doubles. Any contest against them is a dogfight. So to beat Page to get to states was huge.”

When you combine singles and doubles, Rosenbaum’s junior-year record is 32-2.

“Burke is among the best players in our region,” Nixon said. “You’d get very little argument from anyone about that. He is a really good doubles player, too. His game is so steady.”

Combining singles and doubles, Crenshaw is 28-2 as a senior.

“C is the passion that makes them tick,” Nixon said. “When he is calling for the chest bump or screaming it out, Burke feeds off his energy. Their chemistry, you can’t say enough about it. They play like they’ve played together all their lives, and there is a reason for that. They have.”

The cousins hit a wall in the semis, losing 6-3, 6-0 to senior Rish Reddy and junior Parker Williams. That tandem was the 3-A state runners-ups in 2021.

“We ran into a buzzsaw,” Nixon said. “Those two guys have been playing doubles together, their coach told me, for several years like Burke and C have. They too have good chemistry and losing to them is no crime – that is for sure. I didn’t think Burke and C played all that well, but some of that no doubt was the fact that (Reddy and Williams are) really good.”

Rosenbaum/Crenshaw recovered to pull out a consolation win that wasn’t easy. They prevailed 6-3, 7-6 (9-7) over junior Andre Torres and sophomore Ben Powell of Page to secure third place in the region and bump their season doubles record to 17-1.

“I told them after the morning round that the difference between third and fourth in the draw (this) weekend would be huge,” Nixon said. “Burke said: ‘We got this, coach.’ And C chimed in with: ‘We’re good, coach.’ And then they took control. Page made a match of it in the second set, but Burke and C got a few match points and the pressure just got to be too much. We kept applying it and finally the kids from Page felt it. My guys played a great fourth match in two days.”

The state tournament is Friday and Saturday at Millbrook Exchange Park in Raleigh.

“I simply couldn’t be prouder of them,” he said. “This is a special ride we are on.”