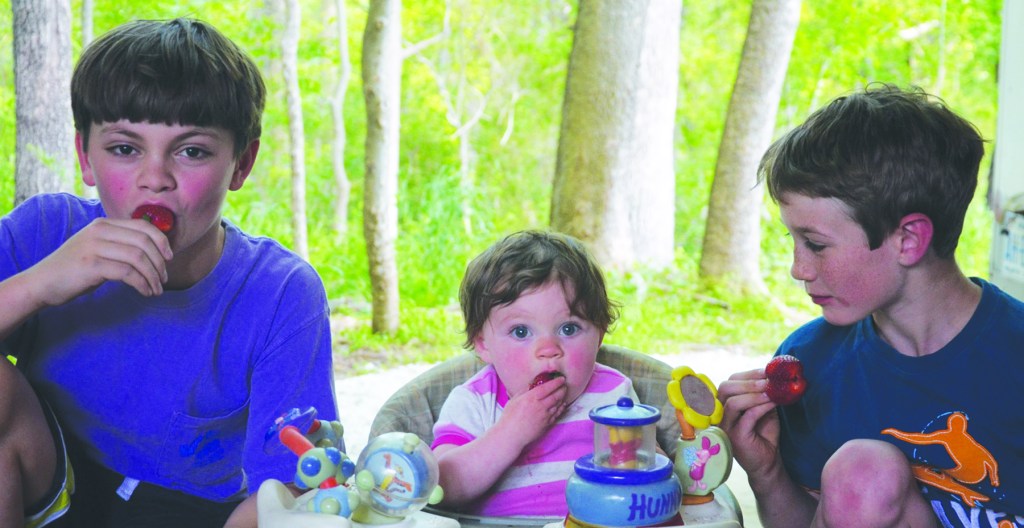 The life of a farmer isn’t easy.

But it is rewarding. And your family eats well.

Just ask Justin and Holly Miller – who along with children Eden, Malachi and AnnaBeth – can be found at Cherry Hill Farms every day. Like clockwork.

The Millers have been carving out their future in farming for nearly a decade, and have switched to more of a farmer to consumer model for the business.

For the next few weeks, it’s strawberries and vegetable and flower bedding plants that will keep them busy.

Other than peaches when fresh and Christmas trees, if they don’t grow it, they don’t sell it. That includes packaged pork and beef products, with the bratwurst being the most popular, Justin said.

“I told somebody there is no profit, it’s a farm, but at least we eat good,” Holly said.

Once a market farm for grocery stores, the family made the decision to sell directly to consumers a couple of years ago. To hear Justin put it, they would rather “sell to people with hearts, unlike  produce directors.”

“We opened in 2020, we had built a customer base so we could support it and get out of that tent on the side of the road,” she said. They post selections daily on Facebook. They also use TikTok, Youtube and Instagram to get the word out.

Justin said they grow “just about every kind of produce under the sun.” They have two greenhouses in production and another under construction.

“My goal next year is to have tomatoes as soon as we pick strawberries,” Justin said, explaining how they can be grown in the ground inside of a high, covered tunnel more than a month before they can be planted outside.

“Every year, we have to add something,” she said.

“We’re trying to make some money,” he added.

Last year, they added Christmas trees and greenery to the offerings to extend the season.

Holly says that people are realizing that fresh food that is picked at its peak and doesn’t travel long distances is just better – nutritionally and taste wise.

“Fresh just tastes better, and there’s more nutrition. Pay attention to where your food comes from. Buy your veggies from the United States farmers. Look at those labels,” she said.

“I’m trying to impress on people … on how much the cost of food is going to rise,” he said. “The higher costs for fertilizer and fuel is going to affect the American farmer.”

The Millers also have a pumpkin patch, one of the few crops that isn’t grown under plastic – black plastic for the cooler weather crops, white plastic for the warm season crops. They grow half runner green beans, which are popular, and sweet corn, another popular offering. All are watered through under plastic drip irrigation. “There’s no comparison as to the yields,” he said.

They have two acres of strawberries, 10 acres of pumpkins and several more acres for other vegetables.

The couple grew up in farming, and decided it’s the life they wanted for their family.

“My parents were full-time farmers,” Holly said. “I liked that, and wanted my kids to enjoy that, to be with us … to be outside … to learn a work ethic. When I was little, everybody wanted to come to my house. So we went in the direction we thought God was taking us.”