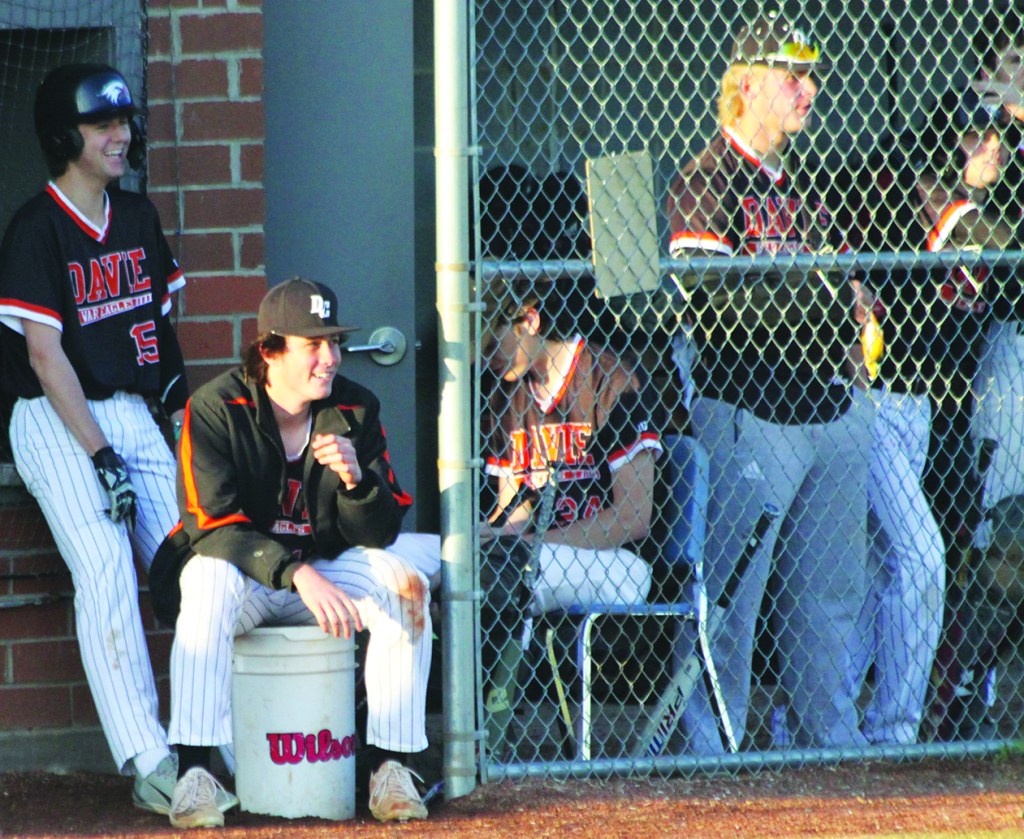 East Surry was supposed to be a sizable obstacle for Davie’s varsity baseball team in Pilot Mountain on April 20.

But thanks to Jaydon Holder’s pitching and three-RBI efforts from the Davin Whitaker/Ty Goodson/Drew Krause trio, the War Eagles won the nonconference game by an eye-popping score of 18-4 in five mercy-rule innings – 12 days after Davie shocked a once-beaten West Forsyth team 24-10.

The Cardinals were 15-0 before meeting Holder and Co. The result was another confidence booster for a team that has now won five straight and seven of eight.

“That’s two undefeated teams we’ve beaten (West Forsyth was actually 12-1 before losing to Davie),” coach Joey Anderson said. “Obviously, East Surry did not throw their top two guys, and I’m sure they’re two great pitchers. But our guys were focussed from the first pitch. They wanted to give them their first loss.”

The high-octane Cardinals, who are 9-0 in the Foothills 2-A Conference, came in averaging 9.2 runs per game. But enter Holder, a junior lefty whose performance met the moment. He faced just four batters in each of the first three innings. In the fourth, East got two runners on, but Holder preserved his shutout by recording a pair of strikeouts. He took an 18-0 lead into the fifth, when a Cardinal connected for a grand slam.

Holder scattered six hits, walked one, fanned six and threw 54 of 81 pitches for strikes. He improved to 3-1 with a 3.50 ERA while tossing his third complete game.

“He got on a roll like we’ve seen from Jaydon in the past,” Anderson said. “He was doing all the things we expect from him. He made two mistakes all night (fielding error, home-run pitch), and that was it. To have that kind of outing against a team like that, hats off to him.”

Holder’s arm doesn’t tell the whole story, of course. In the top of the first, Whitaker had a two-run double and Goodson had a run-scoring single as Davie burst to a 3-0 lead.

The second was an eight-run merry-go-round that saw Davie blend five walks, four hits, an error and a hit batsman. Two-run hits by Goodson and Krause were the big blows.

“He’s starting to relax,” Anderson said. “He puts a lot of pressure on himself. He wants to be in big situations. After having a great year last year, he’s been pitched differently in our conference games, and it’s been tougher on him. When he relaxes and lets his ability work … he is starting to heat up.”

The other three-RBI outings came from two of Davie’s promising freshmen. Goodson went 2-2 and Krause 1-2 with two walks.

“Ty has a very good work ethic,” Anderson said. “He doesn’t say much. He’s like the silent assassin. I wanted him to see what varsity pitching looks like and he’s made adjustments. Those two singles were hit hard.”

When senior Daniel Lawson went down with injury, Anderson had to plug Krause into the all-important role of catcher. He has acquitted himself quite well.

“Daniel is the heart of our team,” he said. “He’s a four-year letterman. He carried us early and everybody rallied around him. Drew got to watch Daniel and now he’s doing a great job. Drew listens. He’s not scared of much. He’s got a swagger. I tell him all the time: ‘Drew, lock in.’ He says: ‘Alright, coach, I’m locking in.’ He’s got an electric arm and he’s gotten some big hits for us.”

Notes: Parker Simmons went 2-3 with three runs. This made him 6-13 during a four-game hitting streak. … Freshman Coy James was 0 for 2 with a walk going into his final at-bat in the fifth. He singled to extend his impressive hitting streak to 11. … At this point, Davie’s top three hitters were James (.383), Simmons (.333) and Parker Aderhold (.313). … Davie mixed 10 hits with 12 walks. … Not surprisingly, Davie crushed Parkland in two Central Piedmont Conference games last week. The scores were 17-0 at home on April 19 and 20-3 in Winston-Salem on April 22. … In the 20-3 game, James slammed his third homer of the year, Whitaker went 4-5 with a homer and five RBIs, and Braeden Rodgers struck out 10 in 6.2 innings. … Davie (10-8 overall) remained in fourth in the standings. East Forsyth is 11-1, West Forsyth and Reagan are both 10-2 and Davie is 7-5. … This is the final week of the regular season.