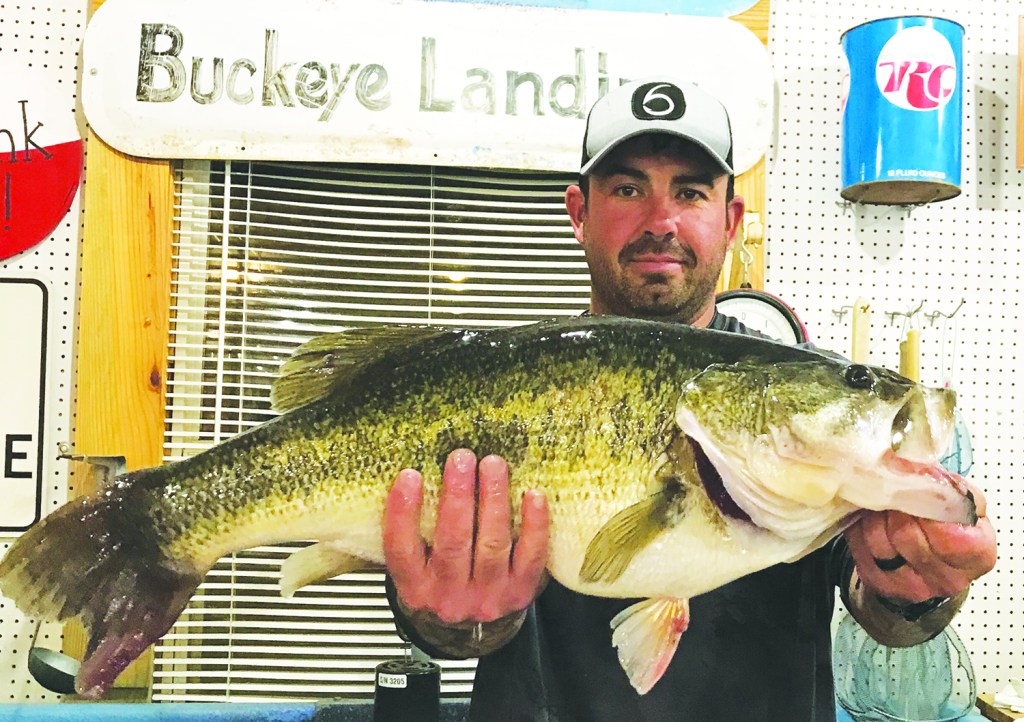 Cody Vincent of Lake Charles, La. with the bass he caught twice in last six months from Toledo Bend Reservoir on Louisiana-Texas border in almost the exact same spot - and 12 miles from where he released it. - Photo courtesy Toledo Bend Lunker Program

The N.C. Wildlife Resources Commission will hold a question-and-answer public forum about chronic wasting disease at the agency’s response on May 2 in Yadkin County. The forum will be from 7-9 p.m. at the Yadkin County Agricultural and Educational Building at 2051 Agricultural Way in Yadkinville. No preregistration is required.

The forum is in response to the state’s first confirmed case of CWD in a hunter-harvested deer in Yadkin County in December. CWD is a fatal, neurological disease that affects white-tailed deer and other cervids. It has been found in 30 states and a handful of Canadian provinces.

In response to the discovery of CWD in a 2 ½-year-old Yadkin County buck, the commission has taken steps to address the problem by establishing Primary and Secondary Surveillance zones, approximate circles with 10- and 60-mile diameters around the site of the kill. Regulation changes in the two zones include ending any fawn rehabilitation, prohibiting the transfer of whitetail glands and produced secretions out of the areas, requiring extensive sampling and testing of deer killed this fall in both zones, making it illegal to transport deer carcasses out of the PSA zone, and prohibiting supplemental feeding and baiting of any birds or wildlife except from Sept. 1 through Jan. 10, including mineral sites.

The N.C. Division of Marine Fisheries is asking anglers targeting cobia in North Carolina waters to help with data collection when the recreational season opens May 1. The agency, working with the Atlantic States Fisheries Commission, wants to collect size, age and genetic information from as many cobia as possible.

The agency is asking anglers to donate cobia carcasses at a handful of collection sites along the coast that will have freezers for donations (https://deq.nc.gov/about/divisions/marine-fisheries/science-and-statistics/carcass-collection-program). Also, creel clerks will be collecting fin clips from cobia at marinas and boat ramps.

Recreational anglers can take one cobia per day, with a 36-inch fork-length minimum size, or two per vessel, from May 1-June 30. The limit per vessel will decrease to one fish on July 1. For-hire vessels (charter boats) will have a one-fish daily limit with a four-fish vessel limit.

Anglers have long wondered about the way fish migrate in bodies of water. Some biological studies tend to point in that direction, as does the historical tendency of some sea-run species – striped bass and salmon, in particular – to return from the ocean to the river of their origin.

A huge largemouth bass in a reservoir on the Texas-Louisiana border has contributed to that debate.

Cody Vincent of Lake Charles, La., caught a 10.88-pound bass from the Six Mile Creek arm of 185,000-acre Toledo Bend Reservoir, last Nov. 12. By reaching double-digit weight, the fish qualified for the Toledo Bend Lunker Program, which recognizes any bass weighing 10 pounds or better caught from the sprawling lake. Lucky fishermen receive a replica mount of their bass, which is weighed, measured, tagged and released alive back into the lake.

Vincent carried the fish 12 miles from his spot in Six Mile Creek to Buckeye Landing, an official weigh station, where the fish hit the scales, met the measuring tape, was tagged and released at the marina’s boat ramp.

On March 14, Six Mile Creek spit out another huge fish for Vincent, this time a 10.19-pounder. Then, on April 6, he caught another giant, weighed it in his boat in Six MIle Creek, knew it was another double-digit bass, and headed back to Buckeye to weigh this one. And he noticed his third big fish in six months had tag protruding from its back.

“Its tail was red, and there were a couple of scratches on it. The belly was still big, but from the weight, I figure she had spawned out and was just starting to feed again,” Vincent said.

But he was in complete wonder at the thought that his third big bass was caught 200 yards from where he caught it the first time, 6 months earlier. The bass, released at Buckeye Landing, had navigated the 12 miles back to almost the exact spot in Six MIle Creek.