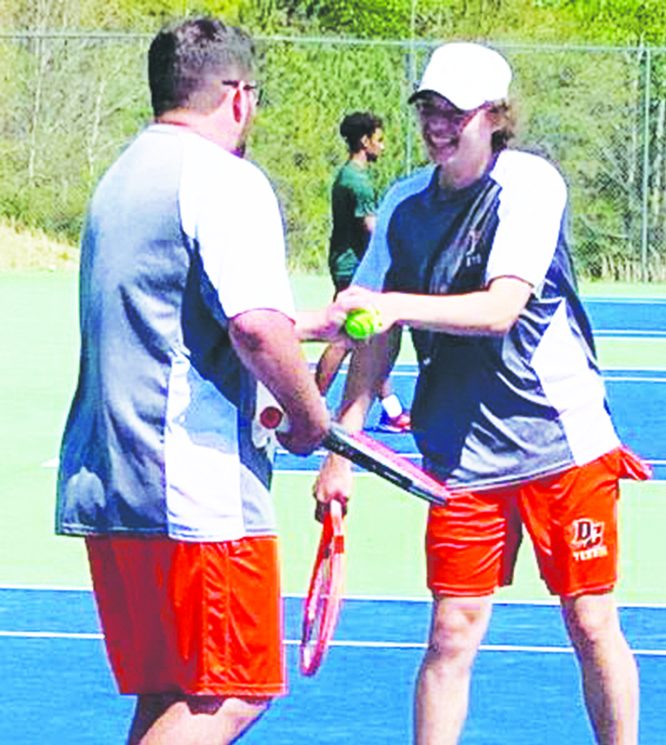 The doubles bracket in the Central Piedmont Conference Tournament at West Forsyth on April 20 was less a contest than a coronation.

“Not once was this thing even in doubt,” he said. “Burke is so dynamic and yet so steady. Everything he does on the court has purpose; there is no wasted effort.

“C is as good a shotmaker as there is in high school tennis. Their pairing is such a good one. Of course, they know each other like the backs of their hands. Their chemistry is off the chart. Anyone who’s seen them play has high expectations of a good run in the state tournament.”

Last season Rosenbaum played singles in the CPC Tournament and dismantled the field as a sophomore, winning 6-0, 6-0 in the title match and becoming Davie’s fifth singles champ this century. But this year he chose to play doubles so he could team up with his cousin.

“It’s nice, especially considering that’s what we’ve always wanted to do,” Crenshaw said. “Since we were little kids, we were pumped to play doubles together at the high school.” Then Crenshaw offered the understatement of the season: “We click pretty well.”

Rosenbaum said: “We’ve been talking about this since we picked up rackets, so it felt really special to do it today. I wanted C to go out on top and get a conference championship his senior year. We played at a very high level all four matches.”

Here are Rosenbaum/Crenshaw’s sparkling numbers. They’re 27-1 as partners in their careers. They went 5-0 at No. 1 doubles in the abbreviated 2020 season. They went 8-1 in 2021, with the only loss coming against Grimsley. (“Their one was a freaking machine,” Crenshaw said.) And they’re 14-0 heading into the Midwest Regional. What’s more, they have left everyone in their path gasping for air, the 2022 running score reaching 124-21 at West Forsyth. In the 28 career matches together, the aggregate score is 232-58.

Rosenbaum: “C serves it great for us. He places his serve really well. We don’t lose many on his serve, and then his hands at the net are just crazy. He doesn’t miss many shots at the net. No matter how hard they hit it, it always goes right back at them. He’s a brick wall up there. He’s one of the best shotmakers, too. Today he made a lot of drop shots and cut shots that were just unbelievable.”

And then: “Also, his emotion. C fires me up. I try to keep it a little mellow when I’m playing by myself. But with C, he brings the emotion out. A lot of extra fist pumps and roars come out when I play with C, which makes it more fun.”

Bryce Bailey trounced a guy from Reagan, 10-2, in the first round. Although he lost 10-5 to East Forsyth senior Bennett Smoak in the second round, there was nothing to be ashamed about.

“He drew arguably the third-best player in singles,” Nixon said. “Last year Smoak crushed Bryce 10-0 in the first round.”

The Smoak loss closed a tremendous season for Bailey. After going 8-5 at No. 6 as a sophomore, he showed massive improvement and went 14-2 at two and three as a junior.

“Bryce played his heart out,” Nixon said. “To see Bryce’s improvement is overwhelming. He made people take note that he is a player to watch next year. I couldn’t be happier with his play. He plays with guts every time he goes out.”

“We had a really good showing,” Nixon said. “(Froelich, Williams, Hill, Keaton and Key) are all underclassmen, so this experience is invaluable for them.”

Notes: In the final regular-season match in Clemmons on April 19, West beat Davie 7-2. Rosenbaum rolled 6-2, 6-0 in singles, and Rosenbaum/Bailey prevailed 8-5 in doubles. Davie (10-5 overall) finished 8-5 in the CPC. “I was proud of my guys,” Nixon said. “We really were just using this to tune-up for the CPC Tournament.” … Rosenbaum/Crenshaw became the first doubles champs since Matt Hauser/Phillip Hursey in 2006. … The Midwest Regional is April 29-30 at Grimsley. “We’ll take it one match at a time, but hopefully we make it to states and make a run,” Rosenbaum said.