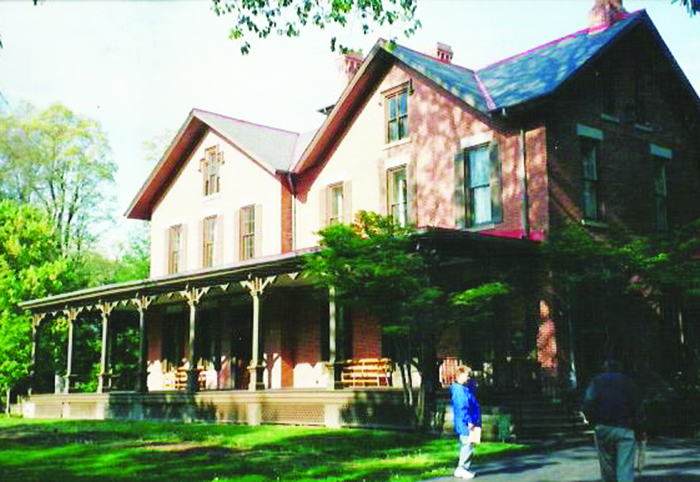 It is doubtful whether any of those seven Ohioans loved their birth state or their home more than Rutherford B. Hayes

Spiegel Grove is the estate that Rutherford B. Hayes was given by his maternal uncle, Sardis Birchard. He lived there for about 20 years.  Mr. Hayes was in Cleveland, Ohio, when he got sick. He was urged to stay in that city until he was better. He refused and said, “I would rather die at Spiegel Grove than to live anywhere else.”  He died at Spiegel Grove in 1893. He and his wife are buried on the grounds at the Spiegel Grove Estate.  The graves are identified by a large granite tombstone. It is not a huge memorial building or a marble temple like that which houses the bodies of some of the presidents but an appropriate tombstone.  The graves are on the grounds of the Spiegel Grove estate, which seemed like hallowed ground to Hayes. Some of the Hayes’ pets are buried just outside the iron fence that surrounds the graves of President and Mrs. Hayes

Rutherford Hayes’ father died when he was young, but money did not seem to be a problem for the family because his well-to-do- Uncle Sardis Birchard helped his relatives.

Rutherford Hayes was a hard-working student who graduated from Kenyon College and Harvard Law School. He set up a law practice in Lower Sandusky, the town which was later renamed Fremont.  The young lawyer moved his practice to Cincinnati.  While there Rutherford got acquainted or re-acquainted with Lucy Webb, a graduate of Wesleyan Female College. He not only met Lucy, but fell deeply in love with her. Lucy developed the same feeling for Rutherford. They were married in 1852. They lived in Cincinnati and started their family; a family that finally grew to include eight children.

The Civil War interrupted the family’s plans.  Rutherford felt that he should serve his country and entered the Army as an officer. While serving as a Union soldier he attained the rank of Brevet Major General. Rutherford was wounded five times. Each time, Lucy left her children with her mother and rushed to the side of her husband. She was also so kind to other wounded soldiers that those men began to call her “Mother Lucy.”

While he was still in the army, Hayes was elected as a representative from his home district to the U.S. House of Representatives. He agreed to run for office, but said he would not campaign nor would he serve until the Civil War was over. At end of the war, he served for some time in the House of Representatives, Mr. Hayes resigned from that office to run for governor of Ohio. He won that election and served two terms as governor. Rutherford B. Hayes moved his family to Spiegel Grove in 1873 two years before he left his home to become governor.

Spiegel Grove was given that named by Rutherford Hayes’ Uncle Sardis Birchard because pools of clear water on the grounds after a rain reflected its grove of trees like mirrors (“Spiegel” is the German word for mirror.) That information comes from the book, “Cabins, Cottages and Mansions” by the Benbows. The building of the house at Spiegel Grove began in 1859. Mr. Birchard wanted to build a home for his family. He was so pleased when Rutherford, his wife, Lucy, and their family moved there.

After the move to Spiegel Grove, Rutherford’s uncle gave him permission to remodel the house in any way.

Rutherford Hayes did a lot of remodeling. He added another section to the house that looked much like the original building. The result was a large house with a long front porch. That porch is actually 80-feet long. The larger house was needed by the large Hayes family and to house Mr. Hayes’ large library.  The library at Spiegel Grove has 12,000 books on its shelves.

The addition also included a reception room, three bedrooms, and indoor plumbing. The most spectacular improvement was a four-story walnut and butternut staircase leading to a rooftop lantern offering a 360-degree view of the Spiegel Grove Estate, according to information provided in a brochure printed by the Rutherford B. Hayes Presidential Center.

In 1876, the Republican Party chose Hayes as their candidate for the President. After a contentious election, Hayes was the winner. He was inaugurated on March 3, 1877, in the Red Room at the White House.

During his term in office, President Hayes worked hard to resolve problems that still lingered after the Civil War. He removed troops that still guarded two southern statehouses when the southern leaders promised to protect the political, economic, and civil rights of southern African Americans. His strong money policies helped make business and industry stronger. He began civil service reform which he hoped would end patronage, and he appointed men with good qualifications to government positions.

When Rutherford B. Hayes agreed to be the Republican candidate for president, he said that he would serve only one term.  Even though he was able to clean up much of the corruption of the Grant administration and was successful in a number of other areas, Hayes stuck to his word.  He refused to run for a second term, thus, he was a one-term president by choice.

At the end of that one term, he went home to Spiegel Grove, the place that he enjoyed so much. He and his wife worked on issues which were important to then, such as education, particularly the education of black children. They also worked on a number of social issues.  Lucy Hayes, who is sometimes known as “Lemonade Lucy” because she would not allow alcohol to be served in the White House, died in 1889.   Rutherford Hayes lived about three lonely years after her death.

Quoting again from “Cabins, Cottages and Mansions” by the Benbows: “Between 1909 and 1914, the president’s family conveyed Spiegel Grove to the State of Ohio.  The gift was conditioned on the construction of a fireproof library and museum building to house the president’s papers and effects.”

The Rutherford B. Hayes Presidential Center was built and is interesting and helpful in understanding the life and times of President Rutherford Birchard Hayes and his family.  If you plan to visit the Spiegel Grove House and the Presidential Center in Fremont, Ohio, which is 495.6 miles from Mocksville, call 419-332-2081 or-800-998-7737   Spiegel Grove is administered by the Ohio Historical Society.