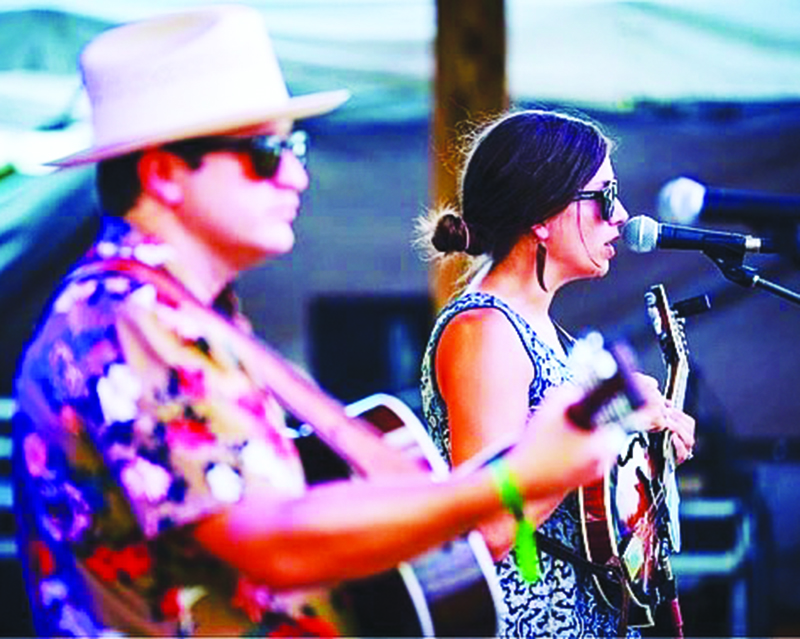 MerleFest, founded in 1988 in memory of Eddy Merle Watson, is about “Music, Moments and Memories,” according to the event’s website.

On April 30, local duo His & Hers will compete in the band competition at the event, making their own music, moments and memories.

Caleb and Sara (Snow) Davis are His & Hers.

In addition to being husband and wife and parents of two sons, they compose original folk and bluegrass music, with  Caleb playing guitar and Sara playing mandolin and singing.

The pair met in the cafeteria in high school and have been making music together for more than 20 years, but got more serious about it six years ago when His & Hers was born. They play about 25 events a year, but MerleFest will be, by far, the biggest of their career.

Caleb said he has no idea how MerleFest’s Artist Relations Team got their name, but he received an email from them asking if they’d be interested in playing.

“We’ve been to MerleFest a couple of times. Our immediate family is so excited about going this year, and we will also get to see lots of friends who go regularly. Everyone is really excited for us,” he said.

“I’m excited to see where this takes us,” said Sara. “Several bands who won the competition in the past have gone on to become really big.”

A total of eight bands will compete Saturday in the Plaza area at the Wilkesboro event, beginning at 11:15 a.m. His & Hers will begin playing their 15-minute set at 2:45. The winner of the competition will be announced at 4 p.m.

Caleb said extra consideration is given to bands that play original music, so they’re planning to play three to five of their original songs, depending on how long they take.

The winner will play a 45-minute set on the Hillside stage Sunday at 11 a.m.

“Honestly, I haven’t even thought about winning,” said Caleb. “We are just thinking about the experience and how fun it will be to get into the festival atmosphere. We really haven’t played much this year at all so this will kind of be our kickoff to 2022.”

They’ll be joined for their competition by Jeff Rumsey, a bass player from Hot Wax & The Splinters.

One of the items for sale at MerfeFest is the annual souvenir t-shirt that lists the names of all the artists on the back. This year’s shirt will include the Davises.

“I’m so excited to be on that t-shirt. You might need a magnifying glass to see our names but we’ll be there,” Caleb said.

MerleFest begins April 28 and is held on the Wilkes Community College Campus. Festival information may be found online at merlefest.org.