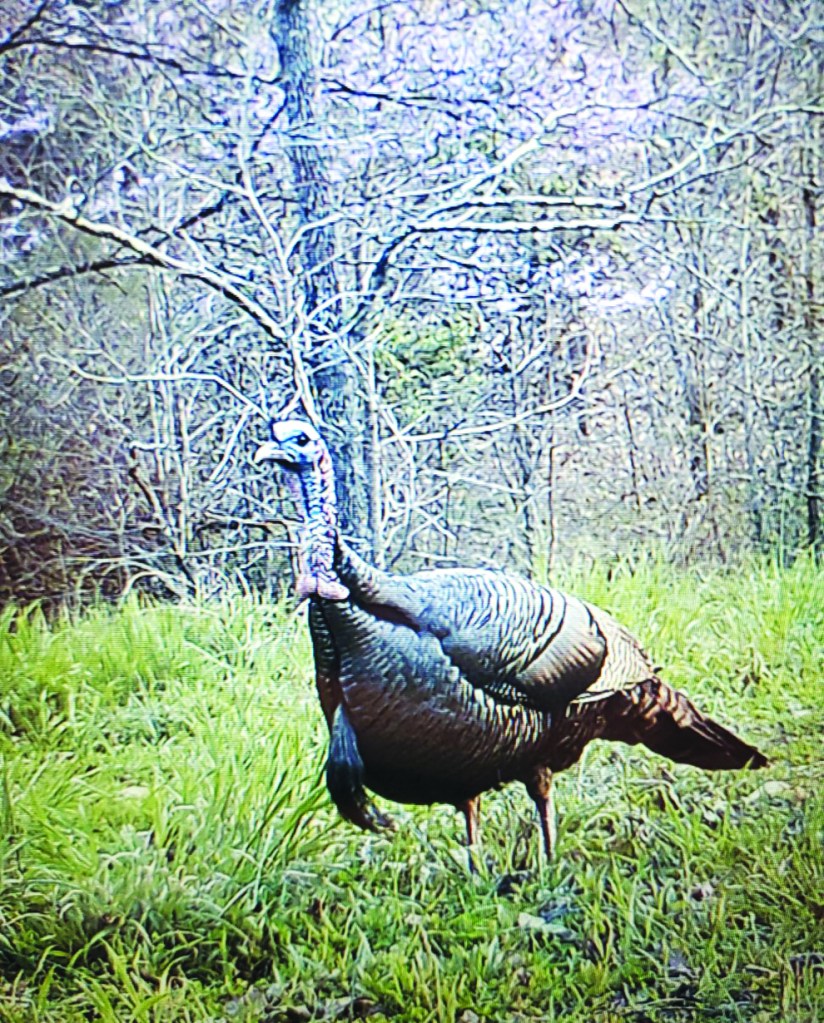 Tom Kelly, an octogenarian from Spanish Fort, Ala., has written some of the most-entertaining books on turkey hunting that are on any hunters bookshelves these days. In his timeless “Tenth Legion,” he wrote about special turkeys that become obsessions for hunters – birds that you can “spend the season with.”

Some turkeys become special to hunters because they’re so smart, because they frustrate you at every turn – putting you through the emotional ringer in the woods, giving you brief glimpses of what is so great about hunting wiley gobblers, then snatching the ultimate prize away from you, usually at the last possible second.

I am afraid – and alternatively thrilled – that on the little farm we hunt in northern Forsyth, we have stumbled on just such a turkey. My son and hunting buddy, Andrew, and I haven’t come up with a nickname for him yet the way we have for other particular turkeys in past seasons.

Two years ago, on opening morning, I killed “Fu Manchu,” a 22-pound gobbler with a beard that split halfway between its base and its tip, looking all the while like the shaggy mustaches that were in style, especially common on the faces baseball players.

On a Stokes County lease, we once hunted “Gate Bird.”

A Yadkin County farm once gave up “Super Jake” to my son, but we never came up with a way to kill “Barn Bird” on the same piece of property

This year’s big bird was likely in Fu Manchu’s company when I showed him a load of No. 9 TSS in 2020, and he was likely in the company of another huge bird – 24 lbs., 12 oz. – that Andrew killed last opening day. Andrew concentrated on him the rest of that 2020 season and had chance after chance, only to have the rug pulled out from under him at the last second.

The big bird showed up in several of our preseason trail-camera photos and videos, sporting a huge body – easily better than 20 pounds – and a paintbrush beard, often in the company of another big bird with a beard that got him the moniker “Rope.” In several other trail-cam photos, we had reason to nickname one hen “Bearded Lady.”

But once North Carolina’s spring wild-turkey season opened on April 9, Rope disappeared like he’d fallen in a hole somewhere. So did Bearded Lady and all of her hen friends. The big bird, however, has more than made up for their absence.

In three mornings in the woods over the first eight days of the season, he has proven beyond the shadow of a doubt that he’s a match for anything the two of us can throw at him. On opening day, with a hen sitting on a limb in the next tree over, the big gobbler never spoke a peep on the roost. No gobbler clucks, no gobbles, nothing. It was like he wasn’t even there. Then, about 7:45, a full hour after daylight, two geese flew over, honking continually. From about 100 yards away, hidden behind a natural blind from which two birds have fallen in the past four seasons, we heard, then saw, the hen leaving her roost in a big beech tree and sailing in a long, curving path a long ways away from us. Within 5 seconds, her beau joined her, leaving his roost in a red oak and following her to parts unknown. We made a huge loop down the ridge to try and get within calling distance of their eventual destination, but it was fruitless.

I was back three days later, in the same blind. No hens were anywhere around, and the gobbler started screaming from his limb in the same tree at 6:40 a.m. He gobbled for a full hour at me, at crows, at roosters, at passing geese, at a peacock on the next farm over – at anything that made noise.

I was as careful as I could be, blinded in, using calls different from the ones he’d heard on opening day, and when the gobbler left his roost, he flew across and slightly down the ridge from me, landing about 90 yards distant and immediately double-gobbling. He started up a logging road to me, gobbler-clucking all the way. I matched him cluck for cluck, knowing he was clucking to tell me he was looking for me, ready to commit various turkey atrocities on my person when he found me. Then, about 65 yards away, he cut back in the woods to my left, now angling toward me. I had my shotgun on my shoulder, my elbow on my left knee, the safety off, clucking back at him on a mouth call. He cut the distance in a hurry, gobbling a couple of times in between the constant clucks.

“This one’s toast,” I thought to myself, quickly realizing that I’d just jinxed myself.

At 50 yards, behind a thick screen of briars, he stopped, clucked three or four more times, then turned on his heels and left on the same path, clucking and gobbling. When he got back to the logging road, he decided that being on the ground wasn’t the way to find the fake hen that was tempting him with all kinds of obscene offers. He flew back up in another oak tree, and as it turned out, I was toast. He stayed up a couple of minutes, and able to look down and see any move I made – even just breathing – with no problem, he pivoted on his limb and flew away to parts unknown.

“That’s not freaking fair,” I whispered to myself, planning our next meeting.

Leaving the woods, I retraced the bird’s steps, figured out just where he was roosting, where he’d landed in the logging road, then looked for hiding places along his flight path. I came upon a couple of nice, wide trees and a big stump about 30 yards down the ridge from where he’d landed, and made mental notes about sitting Andrew there on Saturday morning.

We were there ridiculously early, well before first light, and Andrew cleared out the leaves and set up a portable blind in the area I liked. I marched on up the ridge to my blind. This would be Andrew’s chance at the bird. I tree-called only once at him, at 6:30, before his first gobble at 6:40. From there on, I shut up and let Andrew plead with him.

For an hour, the turkey gobbled at everything that made any kind of noise. I stayed motionless in my blind, about 100 yards from his roost tree, which was almost exactly in between us but 60 yards in front. At 7:40, I heard wing flaps and saw the huge bird sail down, landing in the logging road about 50 yards from me, out of my view around a bend at the base of a red oak tree that forked about 30 feet up the trunk. I figured him to be right in Andrew’s wheelhouse and waited to hear his 12-gauge Remington bark, but there was nothing. No gobbling, no clucking, no trigger-pullling, no loud report and no sound of a dying turkey flopping on the ground.

With my elbow on my knee again, with the safety off and my cheek down on the stock, I figured I had a 50-50 chance at a shot. Certainly, if Andrew hadn’t shot him, I figured he had to be coming my way. A moment later, I saw just the top of the bird’s head bob twice as he went back across the logging road and stopped behind a 10-inch white oak. I licked my lips and waited, knowing that one more step in the same direction would mean a huge bird to fry for Thanksgiving.

But that was the last I saw of him. He simply disappeared. I figure he kept the tree between me and him, headed back down into the hollow where he came from, and then I texted my son, “Elvis has left the building.”

I met up with Andrew a few minutes later. I showed him the forked red oak behind which the bird had landed. Standing a couple of yards in front of his blind, it was in clear view, 50 yards distant. But sitting down inside his blind, there was a big beech tree in the way, and another oak. The bird had landed 50 yards from him, and he hadn’t seen him.

How had this bird split the difference between us and landed in the only spot where neither one of us could get a shot? Well, maybe he’s special. I certainly plan to spend the rest of this season attempting to reduce him to a pile of Gobbler McNuggets. He’s definitely one I can spend the season with. If either of us kill him, it will be really special, because for a week, he’s been as tough an opponent as I’ve ever faced.

And I guess the bird’s nickname should be obvious.