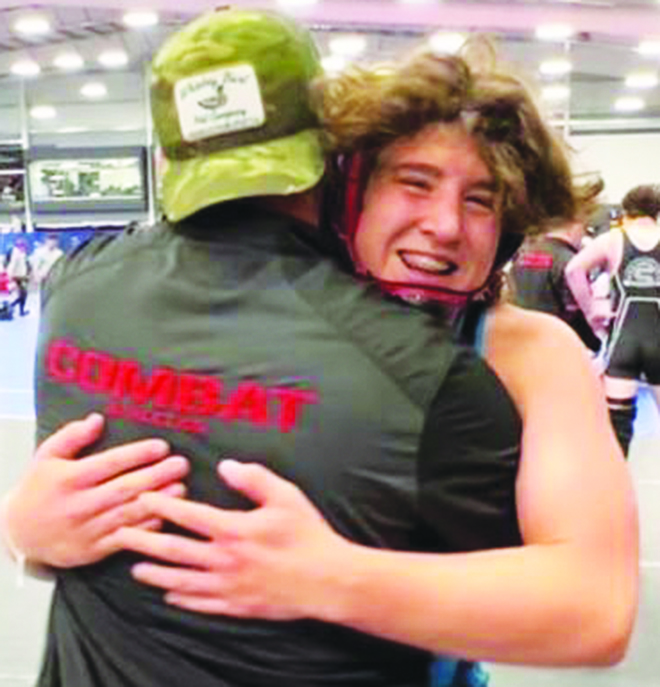 The wrestling ceiling for Hunter Testa, who is 62-6 in two Davie seasons, is clearly very high. The sophomore showed just how high in the 33rd-annual High School Nationals in Virginia Beach, Va., on March 25-27.

He finished fifth out of 52 – making the All-American team – in the sophomore 182-pound division. Enough said.

“My first year, I don’t think I won a match,” said Testa, who attended the Virginia Beach Sports Center several times in the past to wrestle in dual team tournaments. “My second year, I won a couple. Just continuously got better. Kids from up north and out west, they wrestle a lot more than kids around here, and most of the time they’re a lot better. It’s good to go see what’s out there. It really humbles you because you can do really well in North Carolina and then go out there. Like they say, there’s always somebody out there bigger and badder than you, and that’s where you find them.”

Testa started 4-0 in one of the premier wrestling tournaments in the country.  He opened with a second-period pin over Julian Conde of Florida.

“That got my jitters out,” he said. “I was a little nervous going into the tournament. It was nice to get that out of the way and start feeling good about wrestling the rest of the weekend.”

Testa’s second-round victim was New Jersey’s Nicholas Ekimoglou, who was pinned in the first. Then came an 8-2 decision over Landen Shurtleff of Utah.

In the quarterfinals, Testa nailed down his All-American status with a 10-5 decision over Calvin Lachman of Pennsylvania.

“It was an interesting match,” he said. “Right off the bat, he took me down. I think that was the first time I had been taken down in the tournament. I got a late escape and took him down to take the lead. I started to feel him getting tired, and that’s when I started to take advantage of that and really gas him out. By the end of it, he wasn’t getting up off the mat. He was done.”

Testa’s first loss did not come until the semifinals, when he ran into Diego Costa of California. The score was an 18-9 major decision.

“He was strong,” Testa said. “He locked me up tight in tie-ups. I struggled to get out of it and create offense. All in all, though, it’s something to improve on and go home and fix up and be ready for the next time.”

In his first consolation match, Testa fought tooth and nail in a 3-2 loss to New Jersey’s Pantaleo Varga.

Down by two to begin the third period, Testa chose neutral. “I took him down to tie it,” he said. “I let him up to (hopefully) take him down and win the match. I took my hands off of him, cut him all the way, shot in, took him back down, and the ref said we never broke contact. So he didn’t give me two (points) and we ran out of time. But he was a good wrestler. Again, just stuff to learn from.”

Testa recovered and went out in style, winning the fifth/sixth match with a pin over Henry Baronowski of Pennsylvania.

Costa, a guy from Missouri, Lachman and Varga were the top four finishers in Testa’s bracket.

“It’s a great opportunity to see how you do against other kids your age in your weight,” he said. “This was a big deal for me because I went to tournaments at Virginia Beach a lot when I was younger and it was brutal. I would just get destroyed when I was in elementary and middle school. I may have won one or two matches all weekend. It was nice to see all of that pay off and wrestle well against good competition.”

Testa has had two memorable seasons at Davie. As a freshman, he went 28-3 at 182/195 and split two matches in the state tournament. As a sophomore, he went 34-3 at 182 and placed third in the state. He followed up with an All-America effort against wrestlers from across the country.