A star is born: Burke Rosenbaum remains No. 1 tennis seed 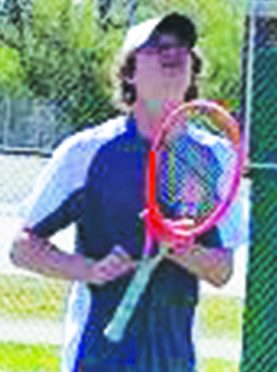 When Burke Rosenbaum stepped onto the tennis courts at Davie High as a freshman, he did so as the No. 1 seed.  As a junior, he is still the No. 1 one and has been since that first day.

Rosenbaum brought potential for his individual game that few, if any, have ever brought. His freshman year, there was a belief that he was a part of Davie’s best team ever. The team was so good and so deep, that a former Central Piedmont Conference singles champ would be the five seed on that talented squad. Most, including their coach, thought they had a chance to make a run in the state dual team tournament. Realistically, it would be difficult to get past the Charlotte and Raleigh teams that have tennis academies basically in-house, but two rounds, maybe three, seemed almost a certainty. COVID derailed that team when it was 6-0 and well on its way to living up to those lofty goals – but the expectations were there and were justified.

Rosenbaum has been living with and playing through high expectations since he began playing tennis at Davie. While that statement is very true, it doesn’t tell the whole story. The phenom has also had to figure out how to play with family members on the team. His older brother Cren was a part of the winningest class to ever go through the Davie program. Burke’s cousin and doubles partner, C Crenshaw, is a two-time All-CPC player. His family has deep roots here, not just in tennis, but certainly on the courts as well.

Expectations have a way, usually, of doing one of two things.  Either they crush those upon whom they sit, or they give purpose to them. It is fair to say in the case of Rosenbaum, expectations didn’t have a chance.

Having only gotten to play six matches due to the pandemic his freshman year, Rosenbaum will not break all-time win records at Davie. Winning percentage, however? Rosenbaum may shatter every mark. As of the week before spring break this year, Rosenbaum was 32-3 in singles. His three losses, only one of which is a conference loss, came to three players all with a better tennis  ranking than Rosenbaum. And it is worth noting that 1 of the three to beat him has also lost to Rosenbaum. Another of the three was last year’s individual state champ. So when Rosenbaum does lose, he does so to some of the best players in the state. Oh, and don’t forget he’s also an excellent doubles player. With a career 24-1 record playing alongside his cousin, Rosenbaum’s three-year record to this point is 58-4.

He has been a CPC singles champ. He is the reigning CPC Player of the year. He’s been a part of a team CPC championship.  He has been a regional qualifier.

As overwhelming as those accomplishments and numbers are, Rosenbaum’s coach, Shane Nixon, says they don’t even tell half the story. Nixon beams about his star player’s other qualities.

“First of all, Burke is wonderful young man,” Nixon said. “Whatever else you say about him, and I can say a lot, you have to start with that – he is just a really great kid. He’s a good student and understands what it means to be a student-athlete. But really, he is just a remarkable person. As a coach, the next thing that comes off the page for Burke is how good a teammate he is. He really wants all the kids on our team to get better, but more importantly, he wants them to enjoy tennis and have a good time playing on this team.”

Stories about Rosenbaum playing doubles in practice with a kid who is not even in the team’s top 10, or volunteering to take his turn carrying the cooler abound. Rosenbaum will choose to miss a high-level lesson to be with his teammates at practice. Nixon adds that Burke’s dad, Dr. Daryl Rosenbaum, told the coach that this was part of Burke’s makeup, but Nixon says, “somehow his own dad undersold this part of it. Burke is a better teammate than any of us know. He does little things in the background, just to help the team.”

With all that, Nixon says his favorite thing about Rosenbaum, though, is something else.

“He is one of the most competitive people I’ve ever been around,” Nixon said. “He wants to win – at everything. Sometimes we play a crazy game called ‘Over the Fence’ at the end of practice to see who has to gather up the tennis balls. Burke wants to crush the other team. But then he usually helps get up tennis balls even if he wins. It is winning that he wants, not the prizes that come with it. When I go to coach him during matches, what he wants to know most is if the team score is in our favor. He asks me, ‘How’s everyone else doing, coach. Are we winning?’ Burke is about winning.”

And Rosenbaum is expected to win – literally almost every time he plays. Even if no one else holds him to it, he seems to have set his sights on lofty places on his own. Rosenbaum recently lost his first ever CPC match, and the team lost that day as well. Nixon recounts that he got a late-night text from Rosenbaum apologizing for his play that day. Rosenbaum texted his coach: “It is supposed to be 2-0 when I finish playing, coach, and I didn’t do my job today. This one is on me.”

Nixon says he reminded his star that it is a team game, and that sometimes we need to view expectations through the lens of perspective.

“I am pretty sure Burke didn’t buy it,” Nixon said. “He thinks he should win. As a coach, I love that about him. I love that he expects to win. He came to tennis at Davie with that expectation.  We talk about winning being a habit for our program, then that habit can become expectation.”

It is an expectation Rosenbaum has made personal, one he embraces and, crazy as it may seem, one he almost always meets.