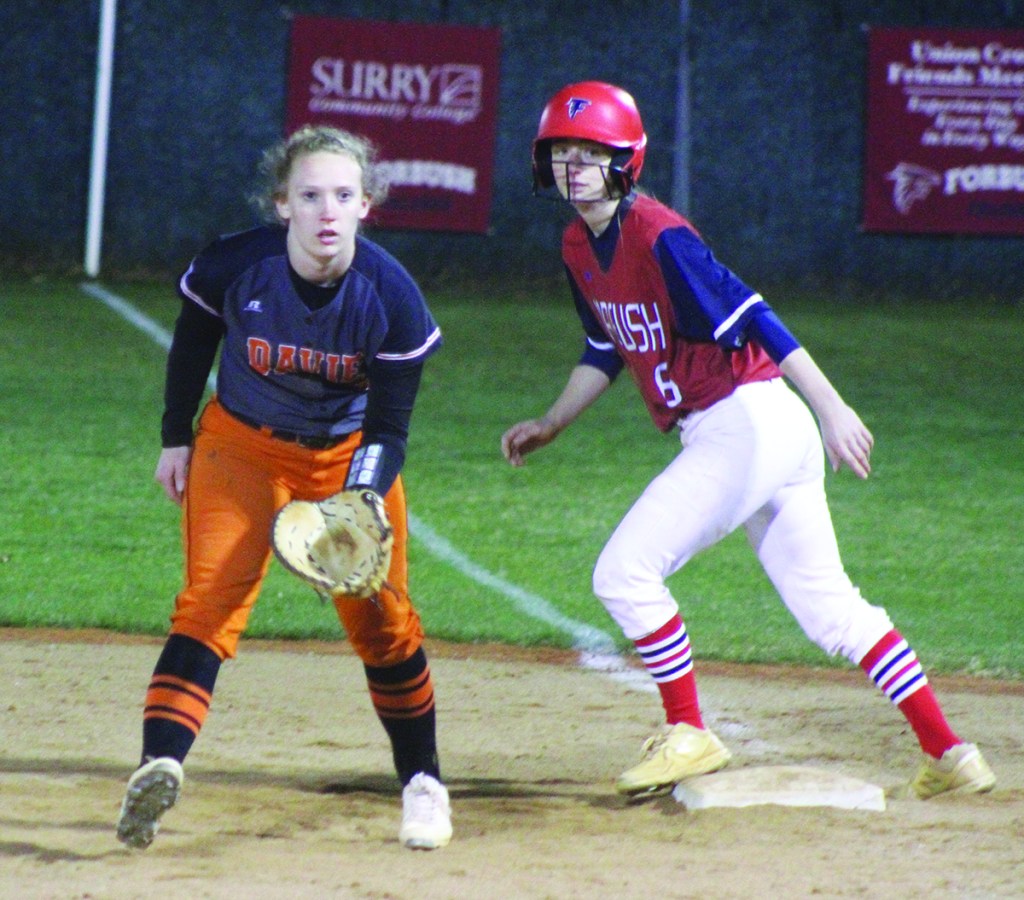 Chesney Shook has been unable to pitch all year due to injury. Riley Potts has been slowed by injury. Addie Hendrix was carrying the load as pitcher before she went down with a shoulder injury. Kaylyn Nuckols was out of town and had to miss an important game against visiting Reagan on April 8.

That’s three pitchers who have been bitten by the injury bug. Needless to say, Davie was in a quandary against the Raiders.

Thank goodness for Raelyn Lankford. A new Davie hero was made in a 15-5 belting of the Raiders, with Lankford delivering a performance in her first high school start in the circle that she can tell her grandchildren about.

Hendrix had worked 42 innings in nine starts in the circle. The other five starts had gone to Nuckols, who had thrown 22 innings. What made Lankford’s complete-game effort all the more impressive is she had only pitched one inning all season, and that was against lowly Reynolds.

The Raiders are a different animal. They outlasted West Forsyth 10-7 in 10 innings, and they battled hard in a 14-11 loss to North Davidson, which beat Davie 14-12. But for the second time this season, the War Eagles did not just beat Reagan – but they trounced the Raiders.

“Raelyn pitched for me at North Davie, but she hasn’t pitched in two years (except for the inning vs. Reynolds),” Davie assistant coach Fred Smith said. “I asked her if she would be willing to pitch some a week ago. Of course, she said yes. I pitched her in practice against our top hitters and she kept them at bay. I put her in a game against Reynolds and she looked good. You take a kid who hasn’t pitched in two years and plug her in a big game that she knew we had to win (to remain comfortably in second place in the Central Piedmont Conference). She was lights out.”

The game started badly for Davie in the top of the first. Reagan got two hits and a walk and there were three errors behind Lankford as the visitors raced to a 3-0 lead.

Davie’s ruthlessly efficient offense shrugged off five errors on the night. With Bailey Snow aboard in the Davie first, Summer Simpson slammed a two-run homer.

“The bats were as hot as I’ve seen them,” Smith said. “Top to bottom, we’re just smoking it right now. Even when London (Dirks) got out a couple times, it was hit on the button to somebody.”

Meanwhile, Lankford was an absolute warrior. In the second, she was hit on the shin by a wicked line drive. She shook it off and wound up holding Reagan to one earned run in five innings. She scattered seven hits, walked one and threw 52 of 88 pitches for strikes.

“Ninety-nine percent of people would have called it a day (after getting hit by the liner),” Smith said. “I’ve coached Raelyn forever and I was like: ‘I know it’s probably too soon because you’re still on the ground, but I’m going to need you to walk that off.’ She was like: ‘I’ve got you. I’ve got you. Just give me a minute.’ She got up, gathered herself, threw one pitch and got a popup to get out of the inning. Then she finished it up. It was something to see. You’re talking about a freshman who doesn’t pitch. She stepped into a big game and got stronger as the game went on.”

Coach Debbie Evans added: “Raelyn was focussed on doing her job in the circle and really came through for us when we needed it.”

“It was a great team win for us,” Evans said.

Simpson is on one of the all-time streaks in Davie annals. The junior is 12 for 14 over five games, hitting her team-high fourth homer and raising her No. 1 average to .534.

“Summer is as hot as I’ve seen a player right now,” Smith said. “I mean she is seeing it and just crushing it.”