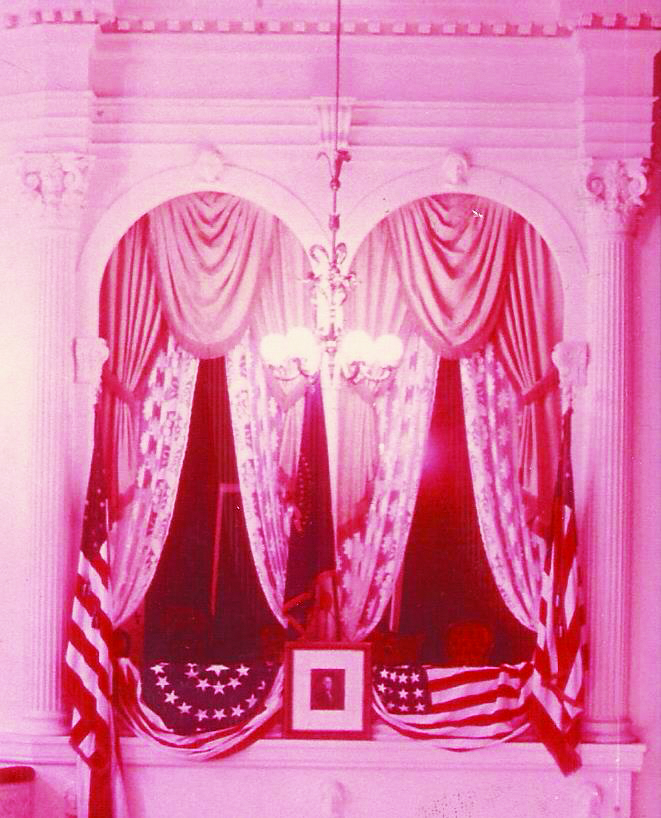 The booth at the Ford Theater where President Abraham Lincoln was assassinated.

The administration of Abraham Lincoln as President of the United States was preceded by eight presidents who served one four-year term or less.

They were: one-term President Martin Van Buren, who was not re-elected to a second term; William Henry Harrison, who died after serving only 31 days; James Tyler, who just served the rest of Harrison’s term; James Knox Polk, who chose to serve just one term; Zachary Taylor, who died after serving just 16 months; Millard Fillmore, who served the rest of Taylor’s term; Franklin Pierce, who served one term, and James Buchanan, also a one term president by choice.

In addition to all the turn-overs in the presidency from 1836 until 1861, there was great turmoil in the country over slavery, states’ rights, and numerous other issues.

Abraham Lincoln, a man who was not well-known in the East, stepped into a situation which seemed to be catastrophic. In spite of all of the difficulties with which the country was beset when he took office, the tall, gangly man from Illinois rose to the occasion. He is now ranked in listings of the Presidents of the United States at the top or near the top of lists by historians.

That was quite an accomplishment for a president who faced what seemed like insolvable problems.

There are probably more sites open to the public connected to Abraham Lincoln than there are to any other person who served as President: the Abraham Lincoln Birthplace National Historic Site in Hodgenville, Ky.; Lincoln’s Boyhood Home in Hodgenville; Lincoln’s Boyhood National Memorial in Lincoln City, Ind.; Lincoln State Park, which is also in Lincoln City; and Lincoln’s New Salem State Historic Site in Petersburg, Ill.

In addition to these sites connected to Lincoln, the most interesting may be the sites in Springfield, Ill. It is at that place where you will find the only house ever owned by Abraham Lincoln. It is at 413 South 8th St., and it is the house where Lincoln was living when he left Springfield to be inaugurated at the President. It is also the home to which he would have returned when he left office if an assassin’s bullet had not prevented his return.

Lincoln’s home looks today just as it did the day that Abraham Lincoln and his family boarded the train for Washington, D. C.

Much of the furniture that belonged to the Lincolns’ was sold when the family left Springfield. That furniture has been replaced with furniture of the period when the Lincolns inhabited the house.

Visitors notice that this was not the home a of a frontier backwoodsman, but is a nicely furnished house. There are some items and artifacts in the house that did belong to the Lincoln family. One of those items is Abraham’s desk, where with a little imagination one can see a tall man bent over writing. The bed in Lincoln’s bedroom may not be the original one, but it is seven feet long which would have been necessary for six foot four Abraham Lincoln to sleep comfortably. A visit to that house is a must for visitors to Springfield.

The Lincoln Presidential Museum and Library, which is near Lincoln’s home, is spectacular. It is the most outstanding or one of the most outstanding of all of the presidential libraries. When you enter the huge building, you are greeted by the Lincoln family – Abraham, Mary, Robert, Willie and Tad—standing in front of a full-size model of the White House.   They are, of course, wax figures, but well done, life-like wax figures.

You see a full-size replica of the log cabin in which Lincoln grew up. Young Lincoln is there reading by the light of the firee.

From that point, you move on through every phase of Abraham Lincoln’s life revealed though dioramas, holograms, movies and every other kind of media imaginable. Some of the tour brings forth emotions you don’t expect.

The other part of the building is the library, which houses Lincoln’s papers and important documents.  For example, one of the four existing copies of the Declaration of Independence is there. What a place for people doing research concerning the 16th President.

As you see, the 744-mile trip from Mocksville to Springfield is a must for people interested in presidential history.

Before leaving Springfield, the visitor must also visit the Lincoln tomb. It is a large marble monument where Lincoln, his wife, Mary, and three of the four Lincoln sons, Eddie, Willie, and Tad, are interred.  The oldest Lincoln son, Robert, is buried at Arlington National Cemetery.

There are other important Lincoln sites that should be visited on the East Coast. The Lincoln Summer White House was really just a cottage at the Old Soldiers’ Home before Lincoln chose it as his get-away-place—away from the heat, the humidity, and the stench of the city in summer. Lincoln rode his horse the three and one half miles twice each day to be with his family at that site. This place is now open for visitors. There are interesting stories about Lincoln’s trip to that destination.

The other place in the Washington area that you should visit is sad but important. It is the Ford Theater which has been remodeled. The visitor there can see the box where the President Lincoln was sitting and enjoying the play, “Our American Cousin,” when an assassin slipped in when a guard left his duty station and shot the President.

There is a display of artifacts in the Ford. Some of the items found there are: the assassin Booth’s dairy, which has his account of the murder and his flight; Booth’s boot, which had a 10-inch slit made by Dr. Mudd when he removed the boot from Booth’s foot; two Colt revolvers, a Spencer carbine; a folding pocketknife; and keys taken from Booth’s body after he was shot at the Garrett’s barn. There are also some articles there that were in Lincoln’s pocket when he was shot.

You can end your tour where Mr. Abraham’s life ended at the Peterson House across the street from the Ford Theater. President Lincoln was carried there and placed on bed that was too short for his six feet four frame. He had to be placed at an angle on the bed. Mary followed as her husband was carried across the street, but she became so distraught that she had to be removed from the room.  She sat in a rocking chair in another room and cried all night.

Doctors arrived as did the members of Lincoln’s cabinet, who stood watch through the night. There was nothing that the doctors could do. The President was too gravely wounded.  President Lincoln’s life ebbed away as he lay in the Peterson House..

After his death, the President’s body was carried to the East Room at the White House. After a service there, it was carried to the Capitol Rotunda where it lay-in-state before being placed on a train from the 800-mile trip back to Springfield. There were about 10 more funeral services in cities along the way as the body moved toward Springfield. Crowds of people stood by the train tracks all across the country weeping as the funeral train passed by. On the train with the President’s body was that of his son, Willie, who had died while the Lincolns lived in the White House.