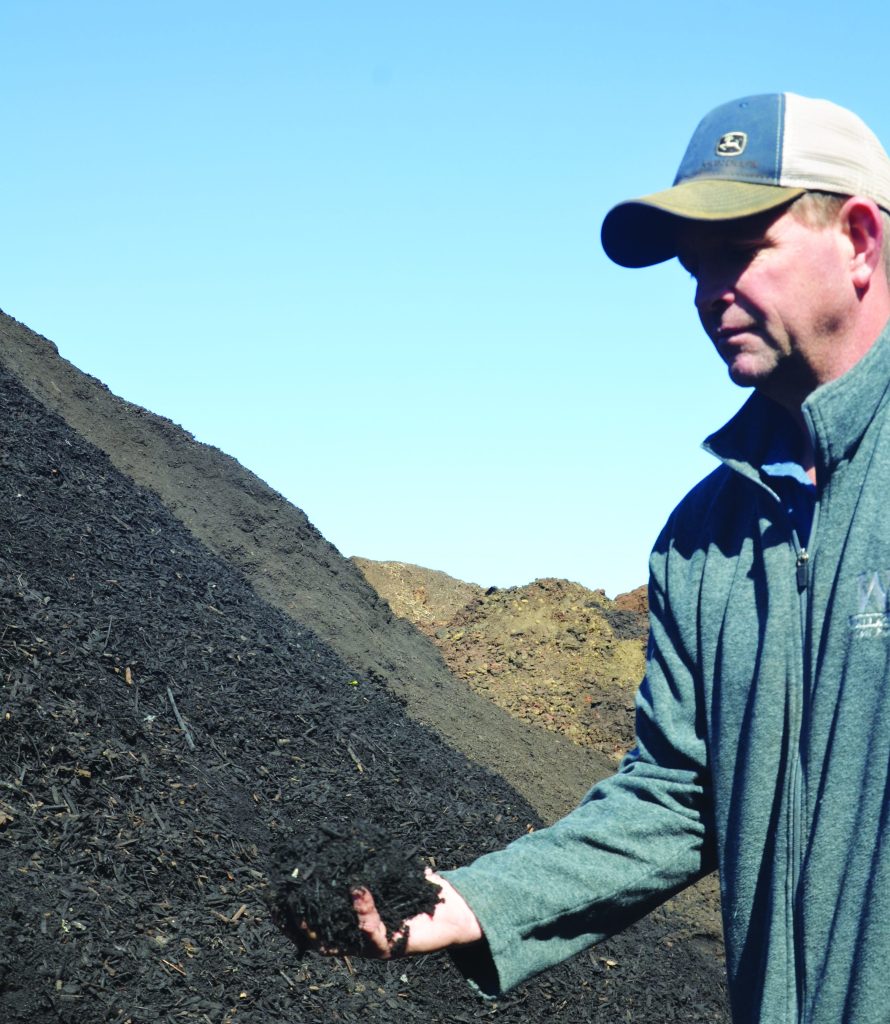 Travelers along I-40 in Davie County can see the large piles of brown and black – sometimes steaming – that line the interstate between Pinebrook School Drive and Rainbow Road.

The company takes yard debris and mixes it with green vegetable materials to make compost. That’s the simple version. It actually cranks out tens of thousands of tons of mulch and compost products a year, under it’s own name brand and also for other suppliers and big box stores. It takes about a year for the raw material to be transformed into a sellable product, mostly put into plastic bags nowadays for sale to homeowners and landscapers.

They sell bags of topsoil, composted manure, composts and mulches. All start from basic, natural materials.

What started out as a way for the family to hold onto some of the land members have farmed since the mid-1800s in the Huntersville area, Wallace Farm Products has turned into one of the largest manufacturer of compost in the state.

It’s a simple process that occurs naturally, the company just helps speed the decomposition up a bit. The result, company president Eric Wallace said, is a useful product made from materials that would otherwise have been discarded. They were part of the green movement before the green movement gained momentum.

Wallace said his family operated a large dairy farm in Huntersville for years, sold the dairy portion, but the arrangement to selling the cows was that the family would continue growing the crops and using the manure from the dairy as compost and fertilizer.

“The arrangement is what started the diversification in our company.”

A recent graduate of N.C. State University at the time, two things happened: the family had plenty of wet manure called a slurry, and needed more woody materials to “bulk it up.” Also at the same time, the state adopted a law banning yard waste from traditional landfills. “That’s when composting became popular … to grind the trees instead of taking them to a stump dump. It all came together.”

During this time, a building boom was also happening in the area, and the farm is now surrounded by surbaban sprawl, with golf courses on two sides and housing developments on the others.

When they started, companies were paying landfill fees to have food waste disposed of. Wallace Farms needed that green food waste, and all now is pre-consumer, meaning it comes from food manufacturers. That cuts down on the contamination factor associated with post-consumer food waste, Eric said. They mostly use yard waste for the brown portions of the mulch, and operate yard debris sites for the City of Winston-Salem to feed the Davie manufacturing site.

That Davie site didn’t just happen. Because of a desire to expand and nowhere to go at Huntersville, Wallace began looking for a new site.

He had pretty much settled on land in western Davie County when someone mentioned the site off Rainbow Road that was already zoned industrial, which not only cut out a lot of headaches, it cut the costs of the project as well.

“I decided that we can’t let this business go away. I was watching all of the urban encroachment around us, and I began to realize we can’t expand here. I began praying over and over,” Wallace said. “I was up in this area and decided, ‘This is where we’re supposed to be’.”

The company’s needs: woody material and commercial green food waste, both were available here. It helped that the company was at the end of a dead-end road, something his father thought would be important. They bought the land in 2014, and were permitted to produce products the following year.

“We deal with materials on a large scale. We’re very conscious about what we will take and what we will not take. Sometimes, there’s a little odor, but we take lots of measures to control it,” he said, including spreading a thin lawyer of sawdust on decomposing rows – and turning those piles at times less likely to be a nuisance.

The company is currently not geared for public sales, but will try to work with anyone who stops by. It is the site for Davie County residents to take yard debris. They employ about 27 people here.

Products are sold under the Wallace Farms name, as well as other company names including big box retailers.

“We were composting before people were talking about composting. We started as one of the first two in the state to get a permit.”

Eric and wife Michelle have a son, Trevor, who is studying agriculture business at N.C. State. He’s planning to come home to work at Wallace Farms – becoming the sixth generation to make a living off of the land.