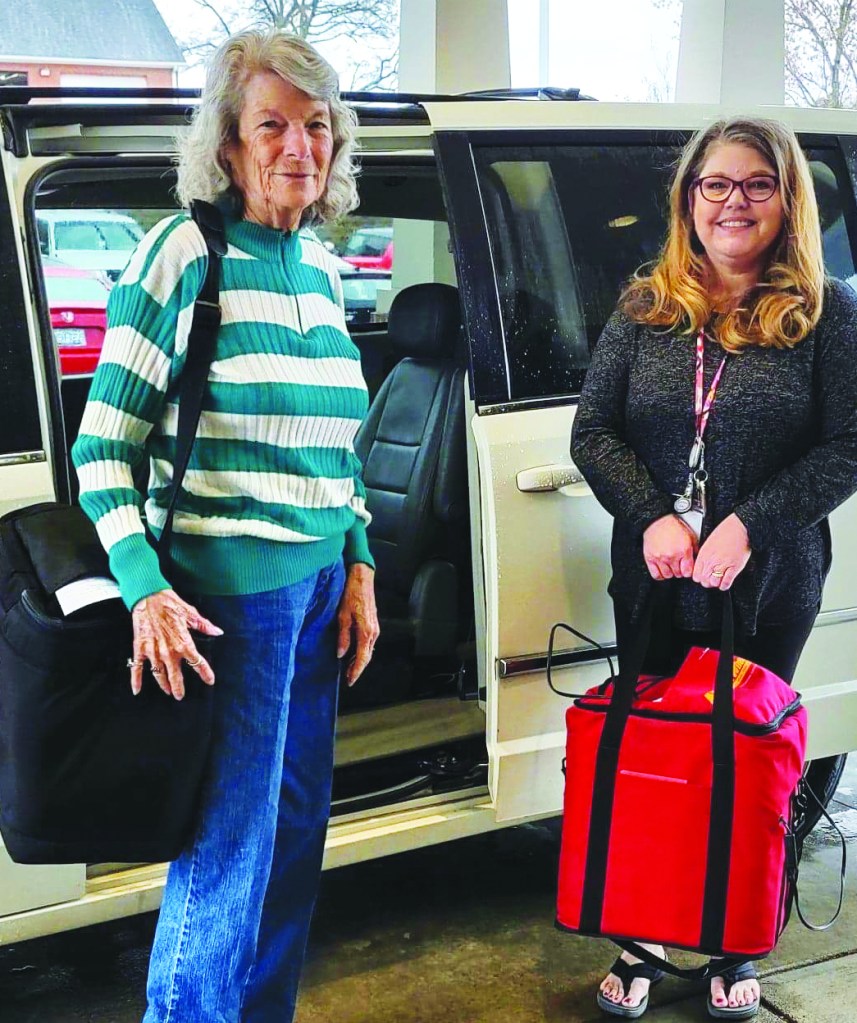 This March, Davie County Senior Services joins the Administration for Community Living and senior nutrition programs across the country to celebrate the 50th anniversary of the national Senior Nutrition Program.

This article is the last in a 5-part series that highlights the nutrition program at Davie Senior Services.

On a recent Friday afternoon, I sat in my office with Meals on Wheels volunteer driver, Phyllis Boger Nichols, chatting with her about a route that she had just returned from delivering.

Phyllis gave me some updates on a few of her clients and was about to be on her way when I asked her if she knew exactly how long she had been delivering meals.  Without any hesitation, Phyllis told me since February 2003.

Of course, I wanted to know more and asked how she knew that off the top of her head.  She said that her Dad, Sam Boger, called her and asked her to take his place.

Sam had been delivering meals since the early 90s when he retired from Ervin Mills in Cooleemee. Sam then decided to work part-time with YVEDDI and ultimately decided to stop working there so that he could volunteer to deliver meals.

As a regular driver, Sam was often asked to have other prospective volunteers ride along with him on a route and train them. Sam had made his home in the Cooleemee area so this route was one that he did most regularly.

In December 1995, Sam was asked if the recently hired Senior Services director, Kim Shuskey, could ride on his route with him.  Today, Shuskey still vividly recalls the day that Sam “trained” her and spent some time with Phyllis talking about the route that day.

Shuskey speaks of Sam’s “quiet but humorous” nature and his caring ways when interacting with the seniors on the route.

I asked Phyllis to share more about her Dad and her family.

Phyllis told me that her parents, Sam and Lois, married in 1939 when her mom was only 16 years old, which was common back then. They had 4 children (Betty Sue, Phyllis, Paul and Sylvia) and Lois stayed at home to raise them. Once they were all old enough to be out of the house, Lois begun work in Salisbury at Leisure Lads as a seamstress and would eventually become a supervisor. She would later work and retire from Monleigh Garments in Mocksville.

Sam and Lois had strong faith in the Lord and raised their family in the church at Liberty United Methodist, where Phyllis and some other family members still attend today.  Both Sam and Lois taught Sunday school for a number of years and helped to serve in any capacity for their community.  Helping others was a way of life for them.

Phyllis “took over” for her Dad in 2003 when he begun to have declining health that would ultimately force him to become homebound.  Phyllis recalls that her mother had already been having health issues that limited her from being able to cook like she always had.

Sam and Lois would then receive Meals on Wheels at their home on Lois Lane for several months before Sam passed away in December 2003. She tells me that her Dad was used to her Mom’s country cooking and that he would often tell her that he had “doctored” up the Meals on Wheels for himself and Lois.

After Sam passed away, Lois continued to receive Meals on Wheels and her family would go by daily to check in on her and to help with anything she might need.

I joined the Senior Services staff in 2004 and fondly remember my first trip to Lois Lane to meet Mrs. Lois Boger to do her reassessment for Meals on Wheels. I was greeted by a little dog that she called Bungee.  She shared stories of her late spouse, her family, and her life experiences.  She told me about her daughter delivering Meals on Wheels, although I had yet to meet her. We went through her file and did a few updates but mainly continued reminiscing about years past.

We played with Bungee and she told me how much Sam loved this dog and about Phyllis sneaking him into the hospital so that he could see him. We may have laughed at more than a few jokes and shed some tears during an episode of the Golden Girls, which was often on when I would stop at the Boger home to deliver meals or on a scheduled home visit.

Lois told me how much she enjoyed having the volunteers come by and how much getting hot meals delivered at lunch was a blessin.  As I left this first time, I remember thinking how much Mrs. Lois Boger reminded me of my own grandmother. She had the same mannerisms and even the same physical look and wore the same glasses.

My own grandmother had passed away in 1998 and I was thankful to have met this lady that reminded me so much of her. I would enjoy many more visits and reassessments with her over the years and would soon meet her daughter Phyllis when she came in to deliver meals.

In 2009, Phyllis would move her Mom into her own home and along with Phyllis’ husband, Jack, they would become Lois’ primary caregivers.  Over the next several years, Lois would continue receiving meals on wheels as respite for Phyllis and Jack.

Phyllis told me that most of the time Jack would be there to help or that her sisters would come and sit with their Mom while she came to deliver meals. After all, Phyllis had promised her Dad that she would take his place and she faithfully delivered meals every Friday on the Advance route for 9 years.

As her Mom’s health would continue to decline, the meals were helpful to both.  Phyllis tells me that her Mom really liked the food and enjoyed the variety except the collard greens.  Phyllis would add vinegar so that her Mom would eat them.

Phyllis kept her Mom at her home and, along with help from family and friends and in-home services such as Meals on Wheels, was able to care for her until she developed a wound on her foot that required constant medical supervision.  At that time the physician told her that she would have to be placed in a facility.  Phyllis and her family would then go daily to the facility and sit with and care for their Mom.

At this point, I’m thinking that Phyllis probably took a break from delivering meals on wheels; however – I’m wrong.

She continued coming in to deliver until the nutrition site manager urged her one day to consider taking a little time off to rest.  Phyllis decided she would take a brief leave and spend more time with her Mom and trying to enjoy her favorite hobby, golfing.  Phyllis’ Mom passed away on Mother’s Day of 2012 and I attended her memorial service at their home church.  I remember speaking to Phyllis in the cemetery and offering my condolences on the loss of her Mother.  I’m not sure that she ever knew how much I had come to love her Mother as well.

One day not too long after this, I was filling in for the newly-hired nutrition site manager and was looking for some volunteers to fill some empty spaces and I ran across Phyllis’ name and number in the “fill in” drivers list and I thought to myself, “What happened to Phyllis?”  I called to ask her if she would want to come back and drive again and without hesitation she said of course she would – she just thought that we had plenty of volunteers so she hadn’t called to ask.

Phyllis returned to “taking her Dad’s place” and now often delivers meals multiple times each week and on any route that is open, but still loves the Advance route.

In 2019, her brother Paul became homebound and needed the meals delivered to him.  He was placed on the Advance delivery route.  In delivering meals, Phyllis was also able to help her brother and see him weekly until he was no longer able to remain at home and later passed away in January 2022.

The Boger family has been helping and been a part of the Davie County Meals on Wheels program for more than 25 years.  Phyllis is a second generation Meals on Wheels volunteer following in her father’s footsteps.  Her Dad’s legacy will continue to live on through her and the staff at Senior Services.

Today, our director, Kim Shuskey, took a trip down memory lane with Phyllis and helped her with her meal route.  It was only fitting that Phyllis just so happened to be filling in on the Cooleemee route, where Shuskey delivered with her dad more than 25 years ago.

Phyllis encourages anyone to give volunteering a try or to come and ride along with her just one time. She says that she “likes to help people and it is very enjoyable for her to meet new people and know that I’m making a difference in their lives. Sometimes I’m the only person that they see each day.”

If interested in learning more about becoming a volunteer or if you have a referral for the Meals on Wheels program, call Senior Services at 336-753-6230.