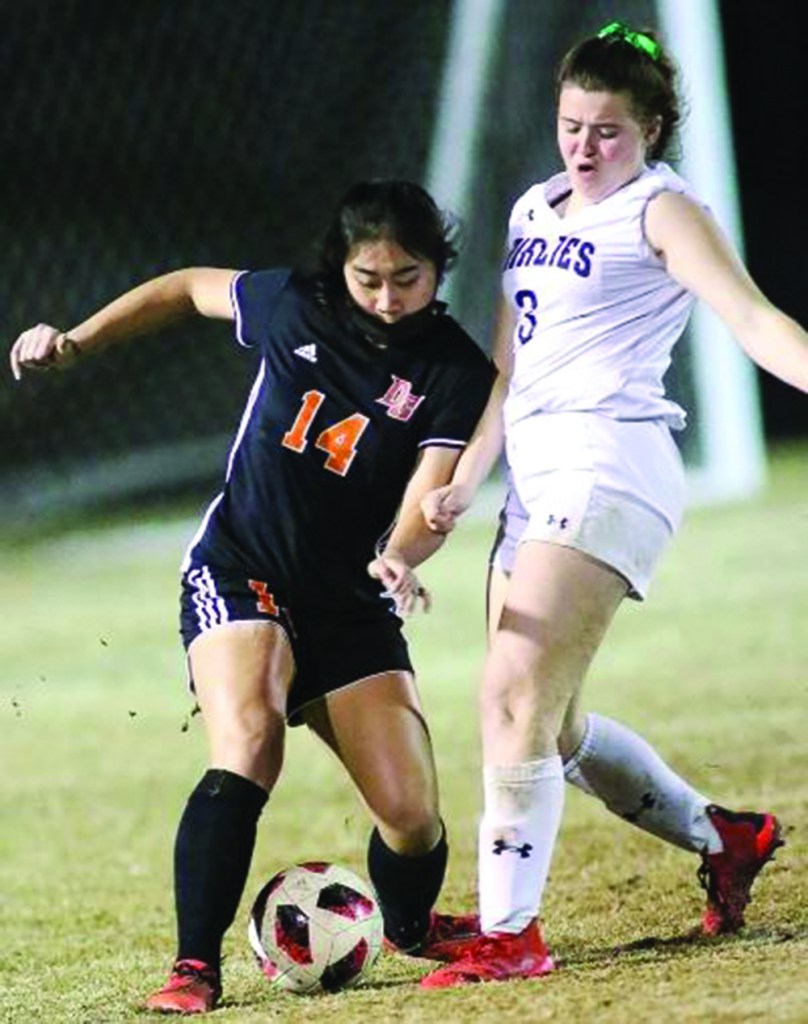 The Whirlies, ranked third in the state in all classifications according to MaxPreps, scored first, but Davie scored next and held its ground from there to get out with a 1-1 tie.

Earlier in the week, Davie got a 0-0 tie against North Davidson. Both ties left the War Eagles in a giddy mood.

The War Eagles were eager to see North again after losing the first meeting 1-0. The Davie defense came through with its fourth shutout as the visitors managed to leave with a tie on March 14.

“The last 10 minutes of the game, we were firing shots left and right,” Kopetzky said. “We fixed our mistakes from the last game and played our game. North is a really good team.”

The hero was Avery Yount, a junior who had a monster game at goalie.

Yount had one save that was highlight-reel material.

“She played unreal,” he said. “She saved one that a year ago would have had me worried. She tipped it over the back. It was one of the most beautiful saves I’ve ever seen in person.”

Then there was a defensive line that is saltier than a concession stand pretzel. Freshman Jaden Sink, junior Emily Garner and sophomore Skylar Link were constants in the back, while sophomore Kim Torres and junior Riley Almond split time at the other spot.

“That back four is unreal,” he said. “Riley has been playing some right mid for us, but I put her back tonight and she did her thing and there wasn’t much getting through.”

Lexi Kulis drilled a critical shot, the defense delivered another impossible performance and Davie gave visiting Grimsley its first blemish in a tie on March 17.

Kopetzky loved it. It wasn’t a win, but it was a moral victory for a program that hasn’t enjoyed a winning season since 2008 and has suffered 12 straight losing seasons.

“The girls bought in. They played outstanding. We clogged the outside. That was their game plan. We made them play more central and it worked out for us.”

Grimsley took the lead when the wet ball slipped through Yount’s hands.

“It took a skip off the ground,” Kopetzky said. “Avery bobbled it and it rolled into the goal. I told her that was on the field conditions. It was wet and soggy. That’s a hard ball to play in those conditions. I told her: ‘Hey, goals happen. You’re not going to be perfect all the time.’”

Yount would redeem herself later in the half.

“She made up for the bobble,” he said. “They took a beautiful shot. It was the nicest save I’ve ever seen Avery have. She made a diving save and punched it over the bar. She was the player of the game.”

It remained 1-0 through the rest of the half.

“To even be in a game with a team like that, that says a lot for my assistants, for the girls and for the program,” he said.

Davie’s counter punch came with around 20 minutes to go. Grimsley was whistled for a handball in the box. Kulis took the penalty kick and converted the kind of goal that can help define a season.

“I think people in Cooleemee heard me tell Lexi that she was taking the PK,” he said after the junior notched her team-high fifth goal. “She played it left of the keeper. It was a beautiful shot. The keeper got a hand on it, but it went in anyway.”

The defense extended its remarkable run. That’s two goals allowed in six games. Yount was joined in the back by Garner, Sink, Link, Torres and freshman Sarah Andrade.

“Sarah got some quality minutes tonight,” he said. “She stepped up. She has improved as the season’s progressed. She played some right mid and made some really good runs and passes.”