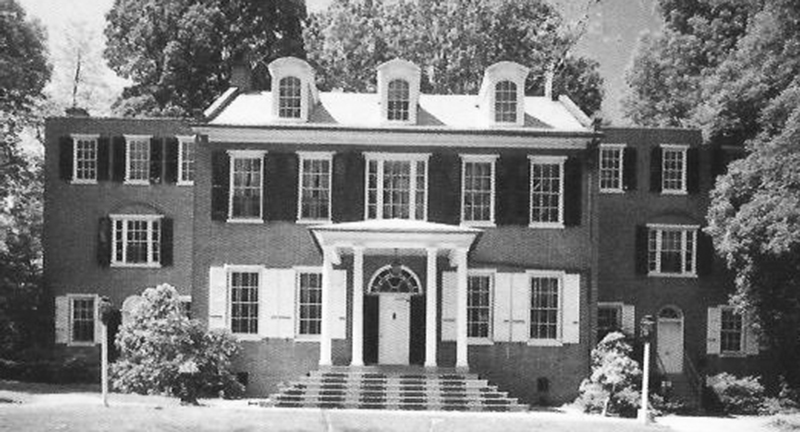 Many of you have been to the Amish country in Pennsylvania, and you may have even been to Lancaster, Pa. If you visited Lancaster, you probably had a good Amish meal and may have visited an Amish workshop, but did you visit the home of the 15th President of the United States?

The home of that President, James Buchanan, is located at 1120 Marietta Ave. and is called Wheatland. It is a large brick house which tells a great deal about Mr. Buchanan.

That house is now owned and administered by the James Buchanan Foundation for the Preservation of Wheatland. It is open to visitors from April 1-Nov. 20 each year.

James Buchanan lived in many places before he bought Wheatland in 1849.

He was born in a log cabin in Mercersburg, Pa.  That cabin has been moved a number of times from its site in Mercersburg. Now it seems to have found a permanent home. In 1952, it was bought by the headmaster of Mercersburg Academy, and it now sits on a lot at that school. The one-room cabin is not open to the public but visitors are allowed to view the inside of the cabin through the windows. The original site of cabin in which Buchanan was born is now marked by a stone pyramid in the Buchanan’s Birthplace State Historical Park on US 16, Mercersburg. The pyramid at the original site of the cabin was conceived by Harriet Lane, niece of James Buchanan.

James Buchanan held many governmental positions before he became President. He was a county prosecutor and then served in the Pennsylvania State Legislature. He was elected to the U.S. House of Representatives in 1820, and, while in Washington, he lived in boardinghouses.

In 1831, he was chosen as Minister to Russia and rented legation headquarters.

From 1834-1844, he served as a U.S. Senator and then as Secretary of State under President James K. Polk. During those years, he rented a furnished house in Washington, which was actually beside the house that was rented by former President John Quincy Adams.

Buchanan, the only lifelong bachelor to serve as President, enjoyed living at Wheatland with his nephew, James Buchanan Henry, who served as his personal secretary, and his niece, Harriet Lane. When Harriet Lane became an orphan at the age of 11, she said that she wanted to live with her Uncle James.  James happily accepted the responsibility of raising his niece. Buchanan sent Harriet to private schools and gave her other opportunities that were available to well-to-do citizens.  Harriet grew up to be a charming young lady.

When James Buchanan was appointed Minister to Great Britain or the Court of Saint James, his niece, Harriet, went with him to England. Harriet was presented to the Queen who was impressed by the charming young lady from the United States. Queen Victoria was so impressed that she gave Harriet the same rank as an ambassador’s wife.  This, of course, pleased Harriet and her Uncle James. Harriet was taken with all things British and especially with the Queen and her husband, Prince Albert. That enchantment, especially with royalty, can be seen when one visits Wheatland.

When James Buchanan was elected President oin 1860 and was inaugurated in 1861, the country was in great turmoil over slavery and states’ rights.  It would have seemed that James Buchanan, who had served in so many governmental positions, would have had the experience and strength to handle the situation.  That was not the case at all.

James Buchanan seemed to do nothing as the Union was falling apart around his feet. He left a note for the incoming President, Abraham Lincoln, which said,”  If you are as happy, my dear sir, on entering this house as I am in leaving it and returning home [then] you are the happiest man in this country.”

When the Presidents of the United States are ranked from most effective to least effective by historians, James Buchanan ranks at or near the bottom.

In spite of the fact the James Buchanan was not a successful President, he did serve the American people in many positions for many years and did so admirably. That service can be remembered a

s one visits Wheatland.  Wheatland is a large, Federal style house, which would be interesting to people interested in history even if it had not been owned by a former president. An interesting thing about the exterior of the house is that the shutters at the windows are painted white on the first floor and green on the second floor.  Some of the features of the house are hand-stenciled linoleum floors and deeply gouged symmetrical shaped found in the woodwork around the doors. One of the most interesting rooms in the house is that of Harriet Lane. It is feminine in every detail. It has a still operable Chickering piano and American-made rococo revival furniture. It is there that the portraits of Queen Victoria and her husband can found hanging on the wall. The room has armless sofas or tete-a-tetes which were designed to accommodate the hoopskirts worn by the ladies of that period. Remember the house was built in 1848, which is over 150 years ago.

James Buchanan lived at Wheatland after he left the White House in 1861 until his death in 1868.  Harriet continued to live at Wheatland until she was 36 years old, married a banker, and moved to Maryland. Harriet, who had inherited the property upon the death of her uncle, never went back there to live after her marriage. She sold the house in 1884, and it remained as private property until 1935 when it was bought by the James Buchanan Foundation for the Preservation of Wheatland. That organization still owns Wheatland and allows people to visit the historic property.  Wheatland was designated a National Historical landmark in 1961. There are special Victorian Christmas candlelight tours held at Wheatland one week in December each year.