East too tough for Davie baseball 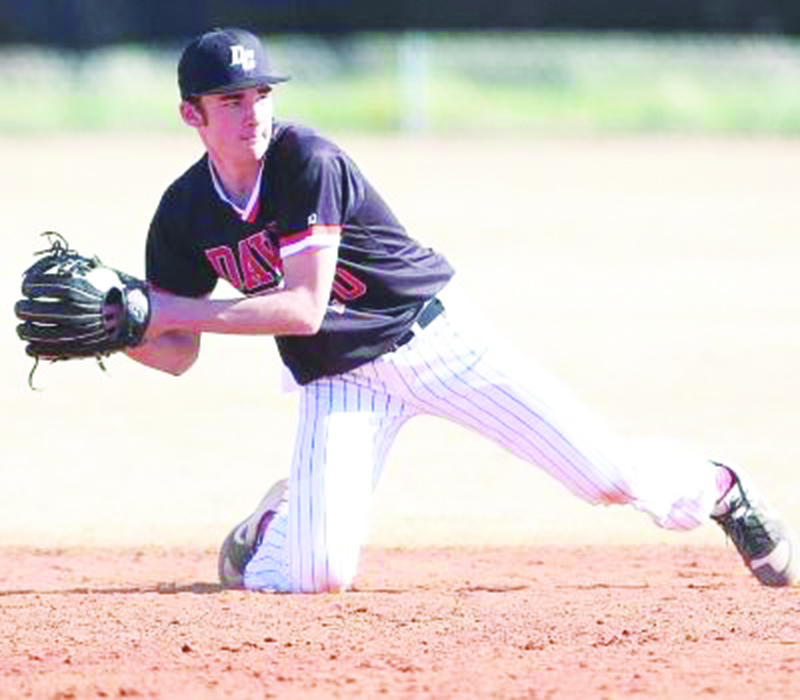 Junior Jackson Sink makes a play at second base.

The week of East Forsyth figured to be tough. For Davie’s varsity baseball team, it was too tough. Davie was swept, which can easily happen against an East team that is overflowing with experienced talent.

In the first game, held at Davie on March 15, pitcher Bayden Hazlip did all he could to prevent a 5-0 loss. It was hard to believe he could pitch better than he did in his first two outings, but he did just that.

This was a 0-0 pitchers’ duel through four innings, with Braxton Stewart putting up zeroes for the visiting side.

In the top of the fifth, the hugely gifted Xavier Isaac, who could get drafted come June, led off the game with an opposite-field double to left. But he was erased by a line drive to shortstop Coy James, who stepped on second to complete the unassisted double play.

Hazlip faced just four batters in the second and third, when he struck out the side. East opened the fourth with a single. The runner stole second, but he was nailed trying to swipe third by Davie catcher Daniel Lawson as a bunt play backfired. Hazlip struck out the next two batters looking.

In the fifth, Isaac came up with two on and two out. The 6-4, 240-pound senior who missed all of last season with an injury broke up Hazlip’s shutout bid with a run-scoring single. Steele Lee homered in the sixth to push East’s lead to 2-0.

Davie came unraveled in the seventh, when Isaac belted a home run.

Although Hazlip (2-1) wound up getting charged with three runs in 6.1 innings, he was outstanding while walking none and fanning eight. Of his 98 pitches, 72 were strikes.

Among Hazlip’s sizzling numbers for the season: Zero walks and 23 Ks in 17.1 innings.

“Again, Bayden threw great,” coach Joey Anderson said. “He kept us in the game. He made some good pitches at tough times.”

It was a riveting duel that was ultimately fruitless for Davie because the War Eagles couldn’t touch Stewart, who walked one and fanned 10 in a complete-game 2-hitter.

Parker Aderhold had a hit and a walk. Jackson Sink had the other hit.

Davie only had two chances to make something happen. In the first, Aderhold singled with one out, but he was caught stealing. In the second, Sink opened with a hit but he was gunned down trying to steal on a hit-and-run play. After that, Stewart retired 15 straight, a streak that was interrupted by Aderhold’s seventh-inning walk.

“Both teams were trying to be aggressive early (on the base paths),” Anderson said. “(Stewart) came right at us. He basically showed his hand and pitched a great game. He challenged us with his fastball, and we have to get better at making adjustments. We have to make adjustments in the middle of at-bats. We’ve got to get our hands quicker.”

Notes: East  improved its overall record to a modest 3-4, but make no mistake, it is a state title contender. Three losses came in a trip to Alabama by scores of 2-1, 3-2 and 2-0. … Davie slipped to 3-3 overall and 2-1 in the Central Piedmont Conference. The win lifted East to 2-1 in the CPC.

Davie’s offense did some nice things in the next two games, but things spiraled in other areas in losses of 13-5 at East and 10-8 to Alexander Central in a home nonconference game.

Going into the game at East on March 18, the War Eagles were hitting a mere .231 with six extra-base hits in six games. They put up a season-high 10 hits, but five errors and 11 walks by three pitchers were too much to overcome.

The top three batters in the order had two-hit nights. James singled and homered. (He has both of Davie’s long balls on the season, and the freshman ended the night with a .333 average.) Ty Miller had two singles. Davin Whitaker had two hits and three steals. In the six hole, Aderhold went 2 for 2 with a walk and two RBIs.

“We turned a corner with our approach at the plate,” Anderson said. “I was very impressed how guys put great swings and shortened up on two very good pitchers (Lee, who was chased after the third, and Ethan Norby).”

The War Eagles, though, failed to put it all together, with three pitchers combining for seven walks and the defense committing four errors.

While the Cougars ran their record to 7-0, Davie’s overall mark dropped to 3-5.