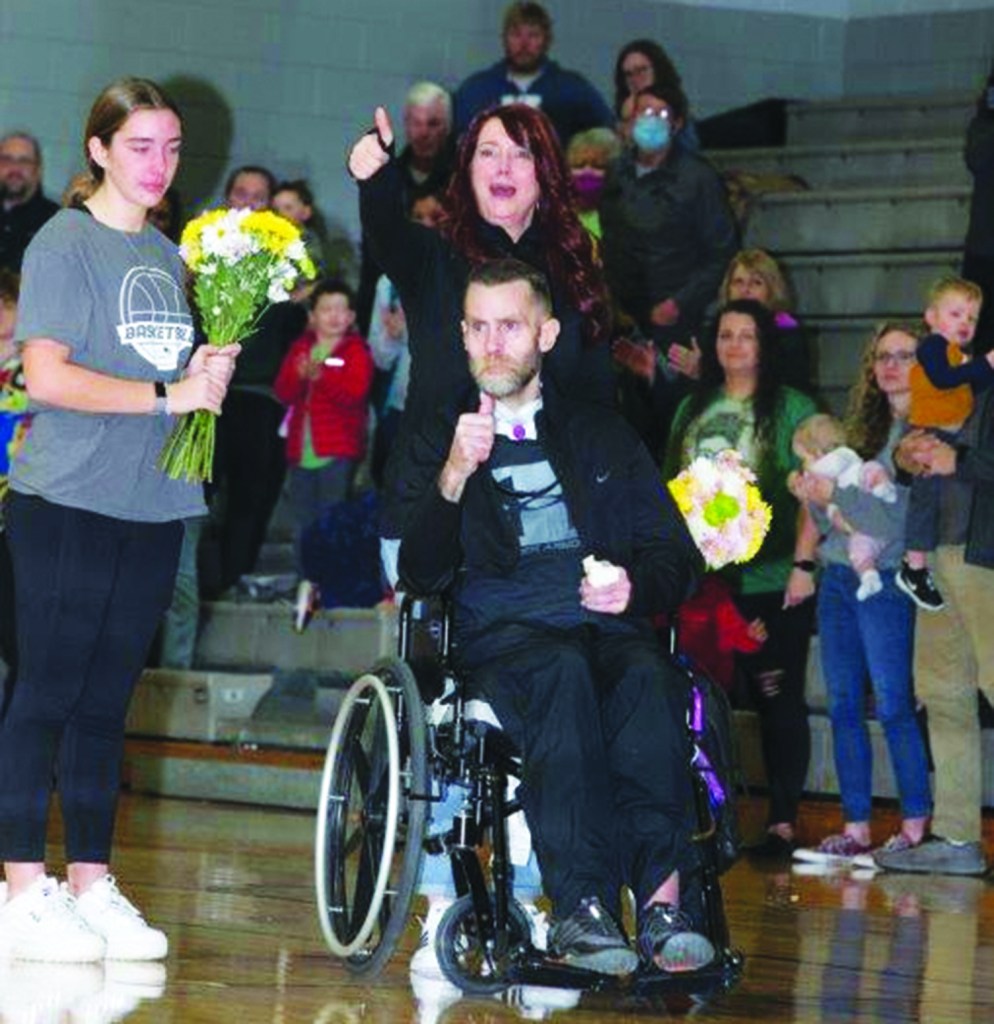 US Marine Master Sgt. Phil Parks and wife Tracie give the thumbs up sign to members of the girls youth basketball team named “Team Parks.”

It’s the same sign he gave when asked if he would sign up to serve his country in the Marines again – even though his exposure to chemicals during his service time caused him to develop a rare and deadly form of Parkinson’s Disease, MSA.

“He is a true Marine and a dedicated husband and father,” said his sister-in-law, Teresa Cookson of Davie County.

Cookson was coaching a girls youth basketball team in the Davie Recreation & Parks league. “I wanted them to play not only for themselves, but to acknowledge someone in our military.”

She told them about her 49-year-old brother-in-law, and Team Parks was born.

“Without any hesitation, they all wanted our team name to be Team Parks. We wanted to honor he and his family for their sacrifices.”

Parks enlisted in the Marine Corps in September of 1990. Following recruit training, he attended the Marine Combat Training and Marine Corps Engineer School at Camp Lejeune, and later was assigned to the 1371 MOS and promoted to lance corporal.

He was assigned to the Marine Corps Combat Development Center in 1991, serving as a basic engineer and carpenter for Guadalcanal Maintenance, and was promoted to corporal.

He was then transferred to Marine Wing Support Squadron 274, 2nd Marine Air Wing, Cherry Point. A year later he was assigned to the Nuclear Biological Chemical Defense (MOS) and promoted to sergeant.

Parks deployed to  Guyana, South America and St. Lucia in support of Combined Joint Task Force Falcon and New Horizons 98 and was promoted to staff sergeant.

In 2009, he deployed to Iraq in support of Operation Iraqi Freedom. In 2010, he was promoted to master sergeant and served the remainder of his deployment as operations chief for MAGTF.

In 2012, he transferred to MARSOC (Marine Forces Special Operations Command) and assigned as the CBRND Chief, the Destructive Weather Officer. In 2013, he deployed to Afghanistan and was assigned to the Commander’s Priorities Integration Team.

It took a few weeks, but Cookson arranged for a ceremony at the beginning of Team Parks’ game recently, complete with military pomp, tears and pride. Parks’ wife, Tracie, was there, she is accountant for the Marines at Camp Lejeune. His daughter, Regan, was also there. She attends early college and is a Classic Soccer player. They are his main caretakers.

They were frequent visitors to Davie County until the disease made it difficult to travel; and he needs to stay closer to his doctors.

“His health is declining, however, every day he fights,” Cookson said.

She tries to instill that same ethic in her young players, who had been asking about the inspiration for “Team Parks” all season. “I am married to a retired Marine, so my work ethic during games and practices is hard, but the girls know what they are representing and never complain.

“We want to show our gratitude and thank Master Sgt. Parks for his loyalty and service to our country. He is an inspiration and a true hero.”

Take it outside: Scout builds learning environment at Smart…