A home video camera led to the arrest of an Advance man on multiple weapons charges last week, including possession of what appeared to be a military-type explosive device. 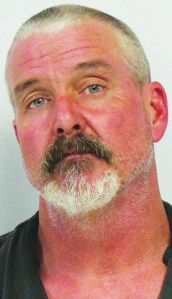 Michael Barrett Guilbault, 49, of Hodgsons MHP, was charged by the Davie Sheriff’s Office with: 2 counts possession of a firearm by a felon, possession of marijuana paraphernalia, driving without a license, possession of weapon of mass destruction, 2 counts having unsealed wine or liquor in a vehicle and assault by pointing a gun.

The sheriff’s office was called to a residence on NC 801 N. at about 9:15 p.m. on March 5 in reference to a disturbance, said Davie Sheriff J.D. Hartman.

The suspect had been involved in a disturbance there, and three witnesses gave different stories, Hartman said. However, a home video camera recorded the suspect pointing a handgun at the victim. He had left with a female prior to deputies arriving.

The next afternoon, Gilbault was driving his truck and when a deputy attempted a stop, he continued on to his residence where he was arrested.

The sheriff’s office confiscated the following from his vehicle: a Norinco SKS style rifle; a Central Arms double barrell shotgun; multiple rounds of ammunition of various calibers; two open containers of alcohol; a glass smoking device; and the explosive device, which was taken for disposal by the SBI.

He also had two black-powder weapons in the vehicle; which are legal for a felon to possess.

Thumbs Up to Team Parks: Girls honor Marine with…