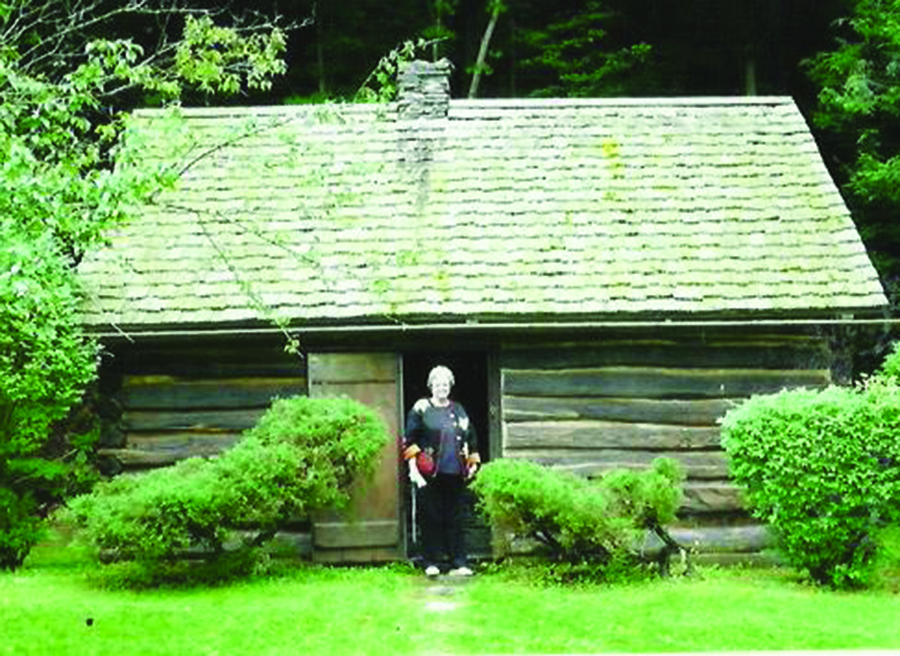 A replica of the cabin in which the 13th President, Millard Fillmore, was born. Author Betty West is standing at the doorway.

The man who became the 13th President of the United States, Millard Fillmore, began life in a log cabin in the beautiful Finger Lakes Region of New York State. To survive, his family had to move into a cabin with an aunt and uncle in Moravia, N.Y. That cabin has been destroyed but a replica has been built, which duplicates the original. The rebuilt cabin is in Fillmore Glenn State Park in Moravia, N.Y., and is open to the public. The book, “Cabins, Cottages, and Mansions” by the Christophers describes the reconstructed cabin in the following manner: “Its logs which are ash, birch, elm and white pine are the original cabin logs. The iron cut nails, hinges, door latch and fireplace crane are hand forged. Its chimney is made of fieldstone taken from the Fillmore birthplace site. Its roof is hand split red cedar from British Columbia. The log rafters are held together with wooden pegs.”

The cabin’s two rooms are visible to the visitor through glass panels, furnished as they would have been when Millard Fillmore lived in the original log cabin, and include: a delft dining set, a high box bed, a small cradle, and a mirror to reflect light. Items used for cooking are on the hearth because all of the cooking was done in the fireplace. A visit to this rebuilt cabin is interesting to anyone who has never been inside a log cabin.

The original cabin was in an isolated place – four miles to the home of the nearest neighbor. That isolation made it hard for Millard to go to school. Once he was enrolled in school, he was an eager student who greatly impressed his teacher, Miss Abigail Powers. When Miss Powers was Millard’s teacher, he was 16 and she was 19.  After a period of time had passed, Millard and Abigail fell in love, but her parents objected because of Fillmore’s poor background.

Millard Fillmore decided that he would continue his education. He wanted to reach the point when he would gain Abigail’s parents approval so he could become the husband of the lady he loved. He went to school for many years. He even went on to law school, got the credentials to be a lawyer, and began to practice in East Aurora, N.Y.  He alsobegan to build a house across the street from his law office. Fillmore helped build the house, which probably makes him the only man who served as President of the United States who actually built or helped build his house with his own hands.  After a seven-year engagement, Millard Fillmore gained the approval that he sought.   He and Abigail got married and moved in the house that he had helped build.

Millard Fillmore became influential in the area of New York where he lived and got involved in politics.  He was elected to the New York Assembly and then to Congress. He and his wife left the East Aurora house and moved to the state capitol. Millard Fillmore became Chancellor at the University of Buffalo and then became the State Comptroller of New York.  He was holding that office when he was nominated to run as Vice President of the United States on the ticket with the Whig presidential candidate, Zachary Taylor.   The Taylor/Fillmore ticket were elected. The Fillmores moved to Washington.  Fillmore because President when Zachary Taylor died and he served as President for 32 months.  Fillmore was not chosen as the candidate of his party to run for President during the next election. He and Abigail went to the inauguration of the next President, Franklin Pierce, and sat outside on a cold, windy day. Mrs. Fillmore took pneumonia after that exposure and died at the Willard Hotel in Washington where they moved after they left the White House. Sometime later, former President Fillmore moved back to Buffalo, N.Y. but not to East Aurora.

The house which Millard Fillmore helped build was moved from its original site and fell into disrepair. It finally caught the attention of Mrs. Margaret Price, the wife of Mr. Irving Price of Fisher-Price Toys. That was the salvation of the Fillmore house in East Aurora. Mrs. Price bought the house in 1930, moved it to its present location, remodeled it, and used it as an art studio. In 1975, the house caught the attention of the Aurora Historical Society that began to raise funds to buy the house. They were successful.  The Aurora Historical Society bought the property and began to restore it to the way that it was when Millard Fillmore lived there

Today the restoration of the house is complete and it is open to the public.The visitor first notes the interesting 12 over eight windows which still have the original glass and then enters the living room through a Federal door which has six panels. The living room walls were stenciled with a red and green in pattern which was traced from one in another house of the same period.Throughout the house there are numerous items which belonged to the Fillmores and the other furnishings are of the period when that family lived in the house.

There is also an interesting library which reminds the visitor that there was no library in the White House when her family moved there, which appalled Mrs. Fillmore. She sought and got funds to begin the First White House Library. She immediately began buying books which she thought should be in every library.

Moravia and East Aurora, N.Y., are about 670 miles from Mocksville, but the visit to the two sites connected to Millard Fillmore make the trip a worthwhile for people really interested in presidential history.

Niagara Falls is about 40 miles from East Aurora so a visit to the Falls would add interest to that trip.