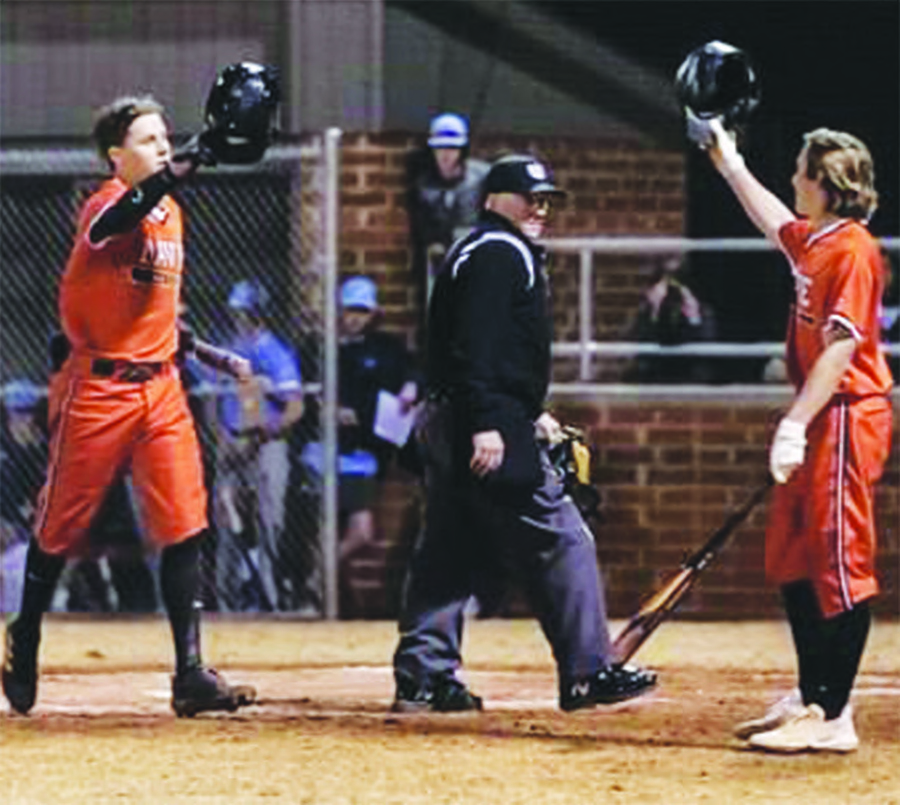 Davie’s varsity baseball team pulled off an astonishing win over Carson in Joey Anderson’s varsity head coaching debut, and the next day his War Eagles built a massive lead over Watauga as freshman Coy James became just the second Davie player to homer in its five-year-old ballpark – in the first home game of his high school career, no less.

But just when the War Eagles looked ready for 2-0, they were outscored 15-4 over the final four innings by Watauga, and the flameout carried over in a loss to West Wilkes.

The War Eagles did something fairly amazing at Carson on March 1, never trailing despite getting outhit 13-4. Timely hitting, effective pitching from four arms and Carson’s four errors helped the cause.

“We took advantage of some mistakes, got some key hits and we ended up squeezing through using every single person except (injured) Daniel Lawson,” Anderson said.

In the second, Jackson Sink walked and came around to score on an error. In the third, Ty Miller singled, Parker Aderhold reached via hit by pitch, and after both runners advanced, Davin Whitaker provided the biggest hit of the game with a two-run single up the middle to make it 3-0.

“That gave us a little breathing room,” Anderson said.

In the fourth, Wesley Mason walked and used his speed to score the fourth run. Mason singled, stole second and scored again during a two-run sixth as Davie regained a four-run lead at 6-2.

Bayden Hazlip was touched for nine hits, but he was brilliant out of the stretch, walking none, striking out five and holding Carson to two runs in four innings. Of his 73 offerings, 50 were strikes. Cole Whitaker worked 1.2 scoreless innings before Caleb Adkins got three outs.

“Bayden pitched tremendous,” Anderson said. “He got out of some jams. He was making very good pitches, especially with people in scoring position. He got out of a bases-loaded jam. He was consistently good using his changeup.”

In the bottom of the seventh, Carson closed within 6-4 and had runners at first and second with two outs. Sophomore Braeden Rodgers got a swinging strikeout to close the door.

“That was his first varsity appearance,” he said. “Braeden has been throwing well and he’s earned that spot. He threw some good pitches to get us out of that game.”

James and the War Eagles had complete control when they scored eight runs in the third in a home game on March 2.

James ambushed the first pitch of the inning for a solo homer to left. Mason and Drew Krause followed with two-run doubles. After Miller had a RBI single, James got his second hit of the third, this time a double, as Davie’s lead swelled to 11-2.

Davie, however, failed to keep its foot on the gas. The Pioneers got back in the game during an 11-batter, seven-run fourth. It seemed as if the War Eagles were going to be alright when they responded with three runs in the fourth, a rally that began with three walks, but that 14-9 lead would soon disappear.

James was hardly to blame for the disappointing loss. Living up to his advanced billing, he went 3 for 4 with two runs, three RBIs and a walk. The only other War Eagle to homer at Davie’s field is Carson Whisenhunt, who did it twice.

Mason and Krause each had three RBIs in a game that saw 322 pitches from nine pitchers, including four from Davie. Watauga outhit Davie 14-7 and there were only three errors.

Davie never led in a home loss to Carson Edmiston and West Wilkes on March 4. The West star struck out 10 in five innings.

“He kept us offbalance all the way through the lineup,” Anderson said. “We didn’t make adjustments we needed to make. We’re not changing our approach in the middle of the at-bat to be able to win the battle.”

Sink was a hard-luck loser for Davie. He went six innings and only allowed three hits while walking one. James and Adkins got the final three outs.

“Jackson did real well,” Anderson said. “I told him at the beginning of the year I was going to have to use him more as a starter than the role he was placed in last year.”

“(But) on the defensive side, we made a couple mental mistakes that cost us,” he said.