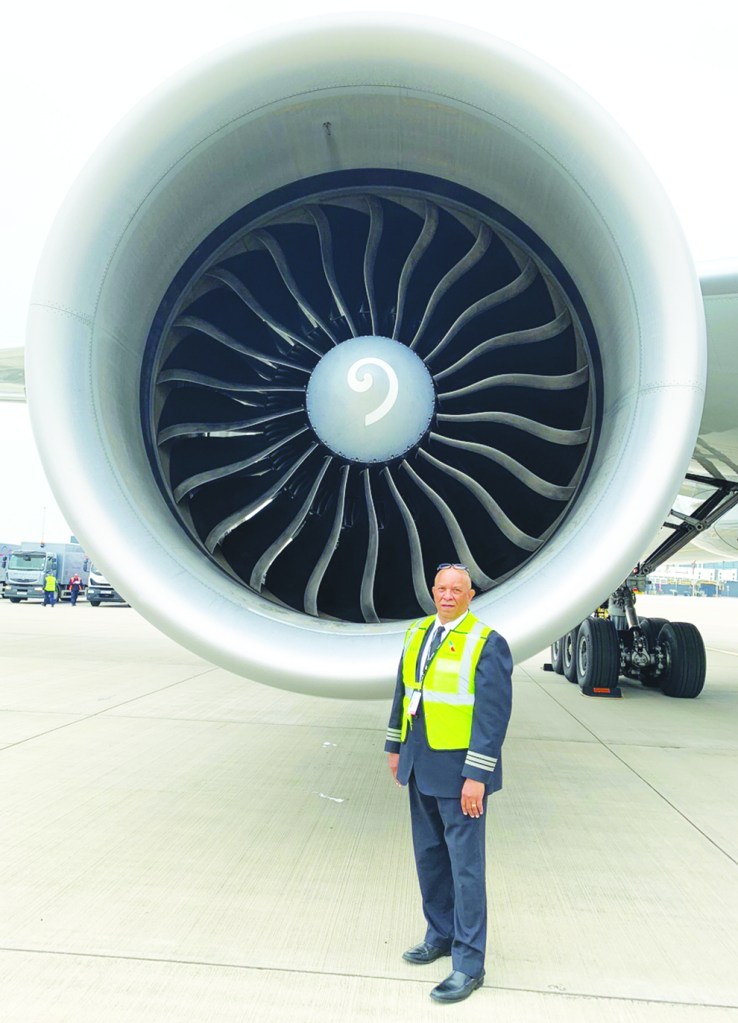 Lonnie A. Wilson Jr. is a family friend.

From Cooleemee, he graduated from Davie High School before becoming an international  airline pilot. It made me think, what started this journey?

I am interested in learning new things, especially if it includes the growth of another person and the content is educational. So I reached out to Lonnie. Following are his answers to some questions I proposed.

Was being an airline pilot a part of your original vision after graduating high school?

Wilson: “At an early age, I realized that this was something which peaked and held my interest for days to come. My parents recognized this in me early on, if it looked like a jet airplane, helicopter, if whatever the models were and they flew, I had it. I recall around the age of 4 or 5 during one of our family’s Christmas celebrations, my sister had received that year’s Barbie Doll Collection, which included a car. The temptation seemed harmless enough for a 5 year old, but when my parents had come to the realization that I had disassembled my sister’s Barbie car, to try to make it out of a car that could just … maybe would fly … the end of the story had a different moral to it.

Going forward, my dad would take the family out to Twin Lakes Airport on many occasions, until one day I was able to be trained and taught and it was at this location that I was able to actually sit in the cockpit of a small engine plane, take flight, and I knew at this point I was on my way in pursuit of my dreams. This magical moment was always in Lonnie’s plans of things to do in his life – his dream, vision. I just had to figure out how to get there.”

Lonnie traveled as he was being trained to be a pilot. He was married, and had two daughters. He was in California and became a single parent to his daughters.

He had to decide if he could still afford flight training. The process was lengthened, but quitting was an option for Lonnie Wilson.

Lonnie never forgot his roots, and though he may have been on the West Coast, the relationship which he had with his mother – Bessie Wilson – never left a gap or distance. I’m sure he needed the comfort, the professionalism and the reassurance of his mother. She was more than qualified to take care of her won as she was a respected Black female business owner in the Cooleemee area.

Lonnie paused to express his live for his mother, and how she never stopped believing in his dream to become the pilot he had always dreamed of being.

Time went on until one day Lonnie received a letter in the mail from his mother. It included the answer to the next piece of the puzzle to be solved. It was because of the love of his mother, who financially invested into the completion of her son’s vision.

Are you the first Black airline pilot from North Carolina? What percentage of Black pilots?

Wilson: “I am not the first, reason being that male and female pilots come to North Carolina from other areas. However, the percentage is less than 3 percent.”

Have you given back to the airline community?

Wilson: “I am part of the Organization of Black Aerospace Professionals (OBAP.org), founded in 1976. It is a non-profit organization dedicated to the encouragement of minorities in all aviation and aerospace careers. In this area, I am also able to mentor and recruit youth for American Airlines.”

What is your furtherest, most interesting destinations?

Wilson: “The furthest flight non-stop was New Delhi, the capital of India, 17.5 hours. This type of flight requires four pilots at all times. Captain’s Quarters allow two pilots to rest and recuperate until the shift change. We were laid over at this destination for a week. The visit and the villages I found to be interesting. It was a great experience to see the culture here.

“Other international flights include Paris, Rome, Spain, Rio de Janeiro. I can’t complain about the benefits or the fruit of my labor that has come with the years.

“Today, as I live my dream as as the first Black captain airline pilot for American Airlines by way of Davie County, I do not hesitate to reach out to be a helping hand for a youth with potential along the way. My carrier is a Boeing Triple 777-300, which can seat up to 200 ticket holders.”

This conversation with Capt. Lonnie A. Wilson Jr. was so interesting. The privilege was mine.

Capt. Wilson and his family now live in Georgia, but he will always call Cooleemee his home.

Murder suspect back in Davie