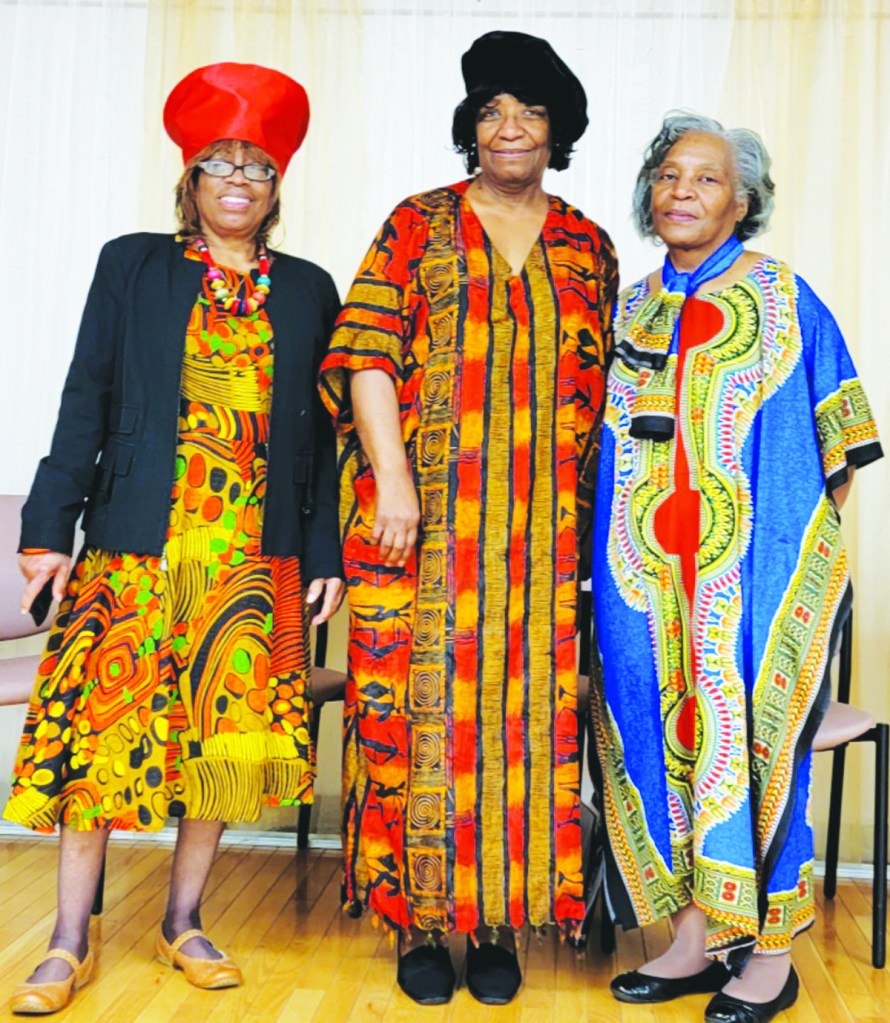 and by Hazel Dillard

The program started with a reading about Black History Month and why it was organized followed by the singing of the Black National Anthem, followed by reciting the African Pledge.

Before starting the tour, everyone was invited to visit the lobby of the (imaginary) museum and take in the display of African Americans.

The first individual introduced was Marcus Garvey, who was instrumental in creating the African Liberation Flag which means, “set free.” He told the audience the meaning of the flag colors. Red was for the blood and struggle. Black represents the people and their color. Green stands for the land and the future.

He said it is “our (African Americans) responsibility to know who we are (black), know that our purpose is to struggle (red), and know that our goal is liberation (set free), and to have a better tomorrow (green).”

The tour started with a visit to Fredrick Douglass, a patriot, activist, and advisor to President Abraham Lincoln during the beginning of the Civil War.

Up next was President Barack Obama, where they learned that he was the first African-American president. He served two terms, and he published an autobiography titled “Dreams from My Father” that has been printed in more than 25 languages.

As the tour continued, the audience met Mary McCleod Bethune, who was elected President of the National Council of Negro Women in 1924.

Next was Rosa Parks, who was arrested after refusing to give up her seat to a white man which started the Montgomery Bus Boycott which led to a 1957 victory in the US Supreme Court that the Montgomery seating laws were unfair, kicking off the Civil Rights Movement.

As the guide continued through the museum journey, the crowd learned in detail about Dr. Martin Luther King Jr., Sojourner Truth, Maya Angelou, finishing with a detour back to the lobby where a special guest appeared – a local celebrity: Selma Burke.

Burke was born in Mooresville, and her uncle was a pastor in Mocksville. Selma Burke is best known for her portrait of Franklin D. Roosevelt on the dime.

To conclude the Black History Museum program, the audience learned of Harriet Tubman, her accomplishments, and the announcement that she would be replacing Andrew Jackson on the $20 bill.

On Tuesday, Feb. 22, more than 50 individuals gathered in person or via Zoom for the annual Black History Month Celebration. Senior Services partnered with the Davie Chapter of the NAACP for an afternoon program titled “Our Journeys, Our Songs: Part 2” following in the footsteps that Alice Brown presented upon in 2021.

Regina Graham-Hauser shared about Julius Suiter, and the audience shared a moment of silence in remembrance of him and his contributions to black history in Davie County.

Nina Simone sang as “I Wish I Knew How It Would Feel to Be Free” was played over the speaker system.

Azalee Stockton, program chair for the NAACP, followed with an introduction to the program and shared information with the audience about Nina Simone and the Refuge Community Church Praise Dance Team. They shared dances to “Stand Up” and “Remember Me.”

Stockton read a biography about Langston Hughes who wrote two poems: “I, too” and “Mother to Son” which were juxtaposed in the program by Hazel Dillard and Priscilla Williams.

Jazmyne Baylor, adult services librarian at the Davie County Public Library, said the library is collecting information on Black History in Davie County. The project was presented in a slideshow and featured the following individuals: Julius Edward Suiter, Vincent Cockerham, Annie Laurie Dulin, Janet Wyatt Fleming, Magalene Dulin Gaither, Dorothy Rucker Graham, PJ Peck, Haley Pulliam and Skylar, Jenny Stevenson, and Lonnie A. Wilson Jr. who all have many accomplishments to share with Davie County and the world. Baylor closed the presentation with a quote from Bell Hooks and encouraged everyone to come by the library and share the stories of Black History in Davie County.

The program closed with Apostle Pleshette Redmond reading a short story titled “A World Without Black People” and Sarah Jeanette Parks singing “I Won’t Go Back” to end the program.

The audience sang the Wesleyan Grace as a blessing for the refreshments.

The National Theme for Black History Month was “Black Health and Wellness” and the refreshments included meatballs, a vegetable tray, fruit tray, and a small dessert for guests.

“Senior Services would like to thank the Davie Chapter of the NAACP for co-sponsoring the 2022 Black History Month program, and look forward to next year’s event,” said Shuskey.

Senior Services gets cornhole boards Scout built for those…