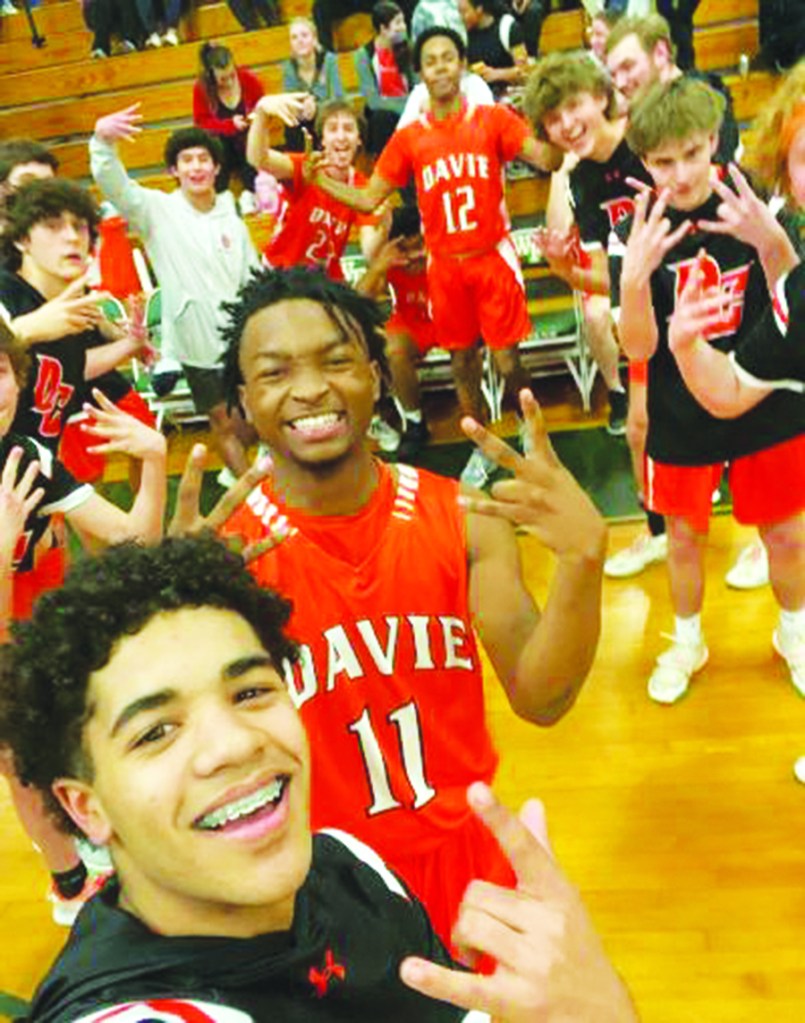 The Davie boys basketball team did everything that coach Bruce Wallace coached and preached in the first round of the 4-A playoffs. And you know what? Davie lost anyway – 63-60 in overtime at East Forsyth on Feb. 22.

Everything had broken right – until it didn’t. East, the No. 6 seed in the West Region after capturing the Central Piedmont Conference’s regular-season title, scored the last six points – in a span of 17 seconds – to deny No. 27 Davie.

“We played really well,” Wallace said. “We did everything we needed to do to win. We just didn’t get it.”

The War Eagles fell behind 20-14, but they never let East get comfortable. They responded with an 8-0 run. Zymere Hudson, who had eight points in the first nine minutes, hit a floater. Blake Walser assisted an inside basket by Tate Carney. Against East’s fullcourt press, Carney scored on a pass from Hudson. Carney’s defensive rebound ignited a beautiful fast break in which the ball moved from Carney to Landon King to Hudson.

The first half ended with Za’haree Maddox swinging the ball to the corner to Hayden Williams, who nailed Davie’s only 3-pointer of the half to give the visitors a 33-31 lead.

“I watched a lot of film and we found the weak spot of that (press),” Wallace said. “And we got layups. They went back into a halfcourt defense in the second half and didn’t press much.

“You’ve got to get them in transition because their halfcourt defense is pretty good. In transition, we were able to get it going. We did a good job of spacing the floor.”

But Davie battled back at crunch time. In the fourth quarter, Walser snatched a defensive rebound and threw long to a streaking Hudson for two. When Powers rebounded an East miss, Hudson took the outlet pass and scored on a one-man fast break. Moments later, Powers knocked the ball away from an East player. Williams dished to Maddox, who finished the break with an and-one. Then Maddox stole the ball, was fouled and hit both free throws to close the gap to 52-51.

East split a pair of free throws, with Powers rebounding the second attempt. Maddox waited patiently to attack, then bounced it inside to Walser. The senior center delivered, scoring at :15 to tie the game at 53.

“We wanted to play them,” Wallace said. “This was our best matchup. That’s the draw we wanted.”

In the nerve-wracking final moments of regulation, Hudson inadvertently fouled as he went for a pass. East had a one-and-one opportunity at :04. The first attempt was off to force overtime.

In OT, East scored on a third chance, then scored again to take a 56-53 lead. Davie, though, refused to fold. Powers rebounded a miss on the front end of a one-and-one and Hudson converted a drive. An East player lost his dribble and Hudson swooped in to get the ball. Then Hudson swished a 3 from the top of the key to put Davie in front 58-56 at :56. It was Hudson’s only attempt from the arc all game.

East hit a free throw, but Hudson was fouled at :25 and made both for a 60-57 advantage. Davie could smell blood in the water.

“The kids wanted it and I thought we were going to beat them,” Wallace said. “But sometimes the ball doesn’t bounce your way.”

Alas, Tim Davis barreled to the hoop for an easy two at :18, cutting Davie’s lead to one.

“We had a defensive miscue,” Wallace said. “It’s better for him to shoot free throws instead of a layup. That was disappointing.”

East had to foul and Davie was at the line for a one-and-one at :18. A violation was called on Davie, which left the door open for East. Braxton Stuart attacked the basket, drew a foul and hit both foul shots to put East ahead 61-60.

Davie inbounded to its floor general, Maddox. He pushed the ball past East’s Jaylen Raynor. He was speeding at halfcourt when Raynor sneaked up from behind and stole the ball. Davie sent Raynor to the line with only one second left. He hit both for the final margin.

In a game that featured six ties and eight lead changes, the War Eagles brought their A-game and came within a hair of advancing.

“We deserved to win and we had a few unlucky breaks,” Wallace said.

The end overshadowed a sensational performance by Hudson, who had a career-high 25 points on 11-of-14 shooting. He added two assists.

While the final game will sting for a while, it was a solid season for the War Eagles, who went 13-11 in Wallace’s first year as head coach and reached five straight winning seasons for the first time since 1971-72. It was the final game for nine Davie seniors.

“They’re all such good friends with each other,” Wallace said. “It matters when teams like each other. All the underclassmen looked up to the seniors, and that’s why it’s so special.”

Three seniors carried Davie offensively. Maddox was a three-year star, averaging 13.4 points as a sophomore, 15.4 as a junior and 17.2 as a senior. Time and again he crossed over helpless defenders with an electric dribble, and his senior scoring average represents the highest in eight years. (Peyton Sell scored 18.8 in 2013-14.) Hudson, who averaged 14 after scoring 8.7 as a junior, played savvy productive ball all season. And Walser improved dramatically after averaging three points as a junior. This year he tripled that to 9.6.

“Za’haree was top three in the conference in every major statistic except rebounding,” Wallace said. “Zymere has been doing that all year.”

Notes: East improved to 21-5 after going 12-2 in the CPC. East beat Davie by three and four points in the regular season. … Davie was the clear underdog after going 7-7 in the CPC to tie for fifth. … The War Eagles had more than their share of heartbreaking losses, going 3-7 in games decided by six points or less. … The game was decided at the free-throw line. While Davie went 7 of 13, East went 21-34. That offset Davie’s edge in shooting, 48 percent to East’s 41%. … Mt. Tabor outlasted Ragsdale 82-78 in overtime, but it was a rough first-round night for other CPC teams. Glenn lost 75-52 to Mooresville, Reagan lost 80-52 to Grimsley and Reynolds lost 116-56 to North Mecklenburg. … In the second round, Tabor rolled 82-57 over Northwest Guilford, but East was pummeled by Myers Park 73-48.