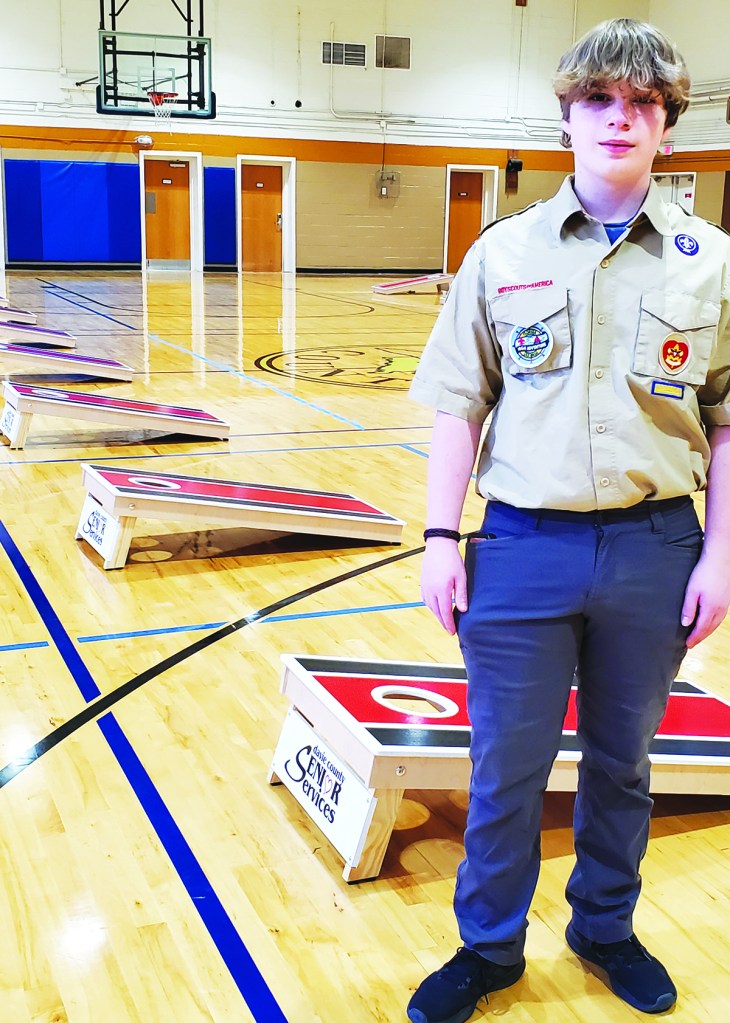 In July of 2021, Senior Services staff reached out to Boy Scout Troop 575 in hopes of finding a Boy Scout in need of an Eagle Scout Project to create eight new sets of cornhole boards for Senior Services .
The boards were needed to use throughout cornhole leagues, Senior Games, practices, and tournaments.
For a Boy Scout, an Eagle Scout project is the final stage before officially becoming a true Eagle Scout. When preparing for the final project, Boy Scouts are intended to choose a project that reflects their leadership and the result should be of significance to impact your community in a special way.
Boy Scout Troop 575 readily agreed to help with this project, and Ian Osborne took on the role of leading his troop in creating eight sets of cornhole boards.
Osborne began this project with meetings with Senior Services staff to get an idea of what type of cornhole boards were needed. For example, there were needs for white outlines on the holes so that visually impaired persons were able to continue participation, and there was a need for rubber bottoms on the boards so that mats were not required for use in order to refrain from damaging gym floors.
The initial meeting was followed by a proposal to the Eagle Scout board which was approved. Next, Osborne and Troop 575 raised money for the approved project by hosting a pancake breakfast at First Baptist Church of Mocksville in September with an absolutely outstanding turnout.
The final steps to completing the project were to build the boards by leading the team of Boy Scouts in creating the eight sets of cornhole boards.
On Tuesday, Feb. 15 at 3:30 p.m., brand new black and red cornhole boards lined the Senior Services Brock Campus Gym for the first time for a grand unveiling and cornhole tournament.
The boards are light weight, and easy to maneuver around the gym. They each have a white circle outline around the hole for individuals with visual impairments. The boards even have rubber bottoms so that they do not scratch the gym floor.
A best two out of three bracket was played. Teams were chosen by drawing numbers out of a cup. Everyone played two or three games.
Winners of the first round moved on to the second round where two to three more games were played.
The final two games were played by Peggy Evans, Joe Mason, Barbara Chapman, and Gary Dailey. There were so many laughs. Evans and Mason came in first place.
Senior Services and the many cornhole participants are grateful to Ian Osborne and Troop 575 for all of their dedication, time, and hard work in allowing this project to come to life. It was certainly appreciated, and Senior Services is honored to be part of the great community in Davie County.
Questions about how to join in on the 2022 Senior Games Cornhole event? Call Senior Services at 336-753-6230 for more information.