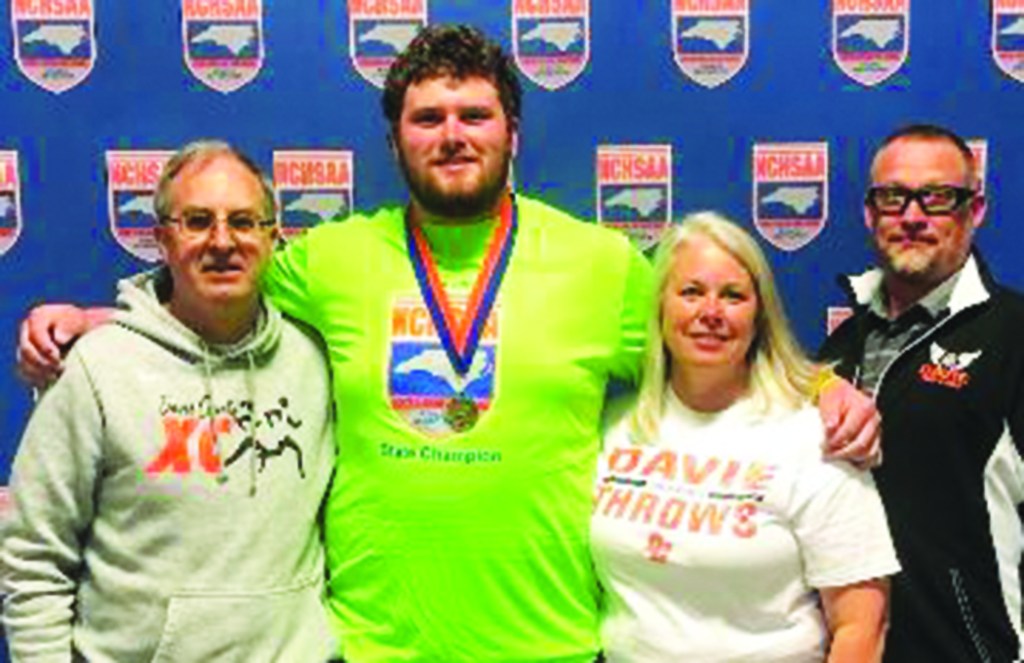 The Davie indoor track team made the short trek to Winston-Salem’s JDL Fast Track Indoor Track and Field facility on Feb. 12 for the 4-A state championships. By virtue of meeting qualifying standards earlier in the season, three War Eagles competed against the best track and field athletes in the state.
Spencer Williams capped an undefeated season by crushing the field in the shot put, adding the indoor state title to his victory at the outdoor state meet last June. Williams entered the meet as the overwhelming favorite, and after a conservative first throw designed to assure himself a place in the finals, he took the lead on his second attempt and never looked back. After the field of 16 throwers was pared down to the nine who advanced to the finals, Williams uncorked a mighty throw of 57-1.75 to win the event by nearly seven feet. Runner-up Trevor Tate of Cuthbertson was the only other competitor to reach the 50-foot plateau.
Last June, Williams won the outdoor state title in the shot put at 60-2, and he was second in the discus at 169-8. His personal record in the shot put is 62. He has lofty goals for the spring outdoor season.
“I’d like to go over 200 feet in the discus, possibly to 210 and break the state record (213),” Williams said. “For shot put, I’d like a state record in that, too, which is 63-9. I think I’m right there at it; I’m ready to finally take a state record.”
While Williams was dominating the competition on one end of the JDL facility, Davie senior Bryson Robinson was taking flight in the high jump. The field of 17 jumpers had already been reduced by half at lower heights before Robinson made his first attempt at 6-1. After a few anxious moments and two misses at that height, Robinson cleared the bar on his final attempt to join the six remaining competitors in the next round. Battling a sore shin, Robinson was unable to clear 6-3 and finished tied for fifth. Eventual champion Kyzaiah Stone from Cleveland soared to a new state record by clearing 7-1 to take the gold medal. Robinson also qualified to compete in the long jump but was scratched from that event to concentrate solely on the high jump.
Robinson is a late-bloomer who is headed to UNC-Wilmington for a track career. Last June in the outdoor state meet, he finished 13th at 5-10.
“It’s definitely not something I thought would happen when I first started high jumping (as a freshman),” Robinson said. “Something happened over the summer between my sophomore and junior year, and I came back jumping 6-6. Coach (Marc) Sweet is a big part of that, helping me fix my technique and everything.”
Williams said of Robinson: “He got really good last year and had a breakout indoor season this year. I’m really proud of how he’s been doing.”
The third Davie entry, junior Monica Long, was among 16 entries in the girls’ shot put. Despite coming into the meet as the 16th seed, Long got off to a strong start with a throw of 31-10 on her first attempt. That mark was good enough to secure her spot as the ninth and final qualifier for the finals. Long was unable to improve her position with her final three attempts to finish just outside of the top-eight scoring positions. Toria Roundtree of Green Hope took the title with a best throw of 38-7.75, a mere one-half inch over the runner-up.
“It’s not what I usually throw, but it was good and it was the best I could do that day,” said Long, who last June was the regional champ at 35-1.75 before finishing 10th in the state at 31-0.25.
In the team competition, the Davie boys finished 16th with 13 points. Cuthbertson claimed the title in a wild team race with 45 points to narrowly edge Porter Ridge (44), Weddington (42) and Mount Tabor (41). Cuthbertson also cruised to the girls team title with 91 points to more than double the 40 points put up by second-place Marvin Ridge.
Williams and Robinson will continue their indoor track seasons next month as both have qualified for the Adidas national championship meet in Virginia Beach, March 18-20. Williams will enter the meet ranked 16th in the country in the shot. Robinson will compete in the high jump and will look to recapture his form that saw him clear 6-8 early in the season. That mark is tied for the 11th-best jump in the country.
Meanwhile, the rest of the War Eagles will immediately transition to outdoor track, with meets beginning in early March.
Davie coach Rob Raisbeck reflected on the indoor season and commented on the outdoor season to come.
“We did some really good things indoors despite taking a low-key approach,” Raisbeck said. “Having a state champion as well as two other athletes reach their event finals is a great accomplishment. With realignment and having several superior programs moving up to 4-A, the competition keeps getting stronger. Our goal outdoors is to secure another top-10 team finish at states following our eighth-place finish last year.
“We hope to pick up more student-athletes, especially girls, as we open up the outdoor season this week. We really need more sprinters and jumpers for us to take that next step as a program.”