A round of applause, please: Varsity girls heading in right direction 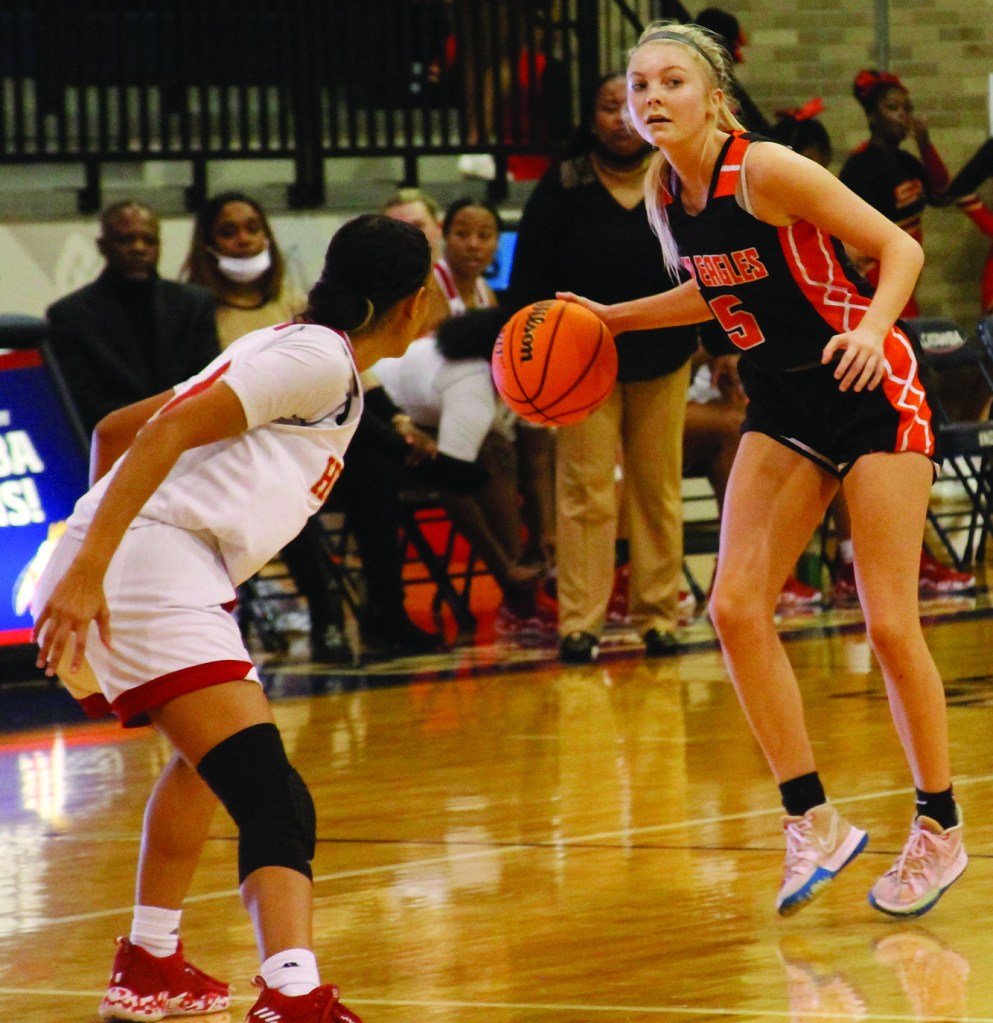 A record of five games under .500 wouldn’t typically be cause for a team to rejoice. But if there was ever a 9-14 team that deserved a round of applause, it was the 2021-22 Davie girls basketball squad.
Two seasons ago, the War Eagles went 0-25. Last season, Lindsey Adams’ first as coach, the rebuild began with a 3-9 record. This season saw Davie start 1-9, meaning it was 4-43 across three seasons. Then came an 8-5 turnaround that resulted in the most wins in six years.
“It’s the best season Davie’s had in a long time, and you’ve got to be proud of what we’ve accomplished,” Adams said. “It’s a process; it doesn’t just change overnight. We will have everybody back except two, and we’ll have some pretty good talent of incoming freshmen.”
Davie’s season ended in the first round of the Central Piedmont Conference Tournament on Feb. 14. The fourth-seeded War Eagles lost control of the game in the third quarter, and No. 5 West Forsyth won the rubber match 38-35.
Beautiful ball movement – London Dirks to Keelyn Oakes to Malayka Rankin for a layup – got Davie on the board, but the War Eagles were 1 for 8 shooting until Peyton Spaugh’s 3-pointer cut West’s lead to 6-5.
That was the spark it needed. When Somer Johnson drained a 19-footer, Davie was up 7-6 and it would lead the rest of the first half.
Twice Kenadi Gentry assisted baskets by Oakes. Johnson scored the last four points as Davie entered halftime with a 16-12 lead.
“The two games before (against West), I had been more worried about their leading scorer (Abby Hunter),” Adams said. “Whereas tonight, I said let (Hunter) get hers, but we can’t let them score in the paint. So we had more people in the paint, double-teaming (Lauren Colamarino).”
Both teams struggled offensively in the first half – the teams were a combined 13 of 47 from the floor and they were 1-5 from the foul line – but Davie had the edge because of its tenacious defense.
“They couldn’t make anything in the first half because we were shutting down the high-low, which is what they’re good at,” Adams said. “In the second half, they hit some outside shots and got the momentum.”
At the outset of the third, Gentry banked in a running hook and Rankin took a charge. Davie had a 19-18 lead and it looked like this one would not be decided until the final minutes.
But then West’s offense went nuclear. West went on an 11-0 run, doing most of the damage in the paint. When the Titans hit their only 3-pointer in 10 attempts, they had a 29-19 lead. Once the Titans started hitting, they couldn’t miss.
By contrast, everyone from Davie struggled on offense. It missed 10 straight shots before Johnson turned a steal into a basket that cut the deficit to 29-21. But then West nailed eight straight shots to open up a 37-23 lead.
“We only lost the third quarter,” Adams said. “We came out flat and lost sight of their big girl (Colamarino). We did a good job on her and held them to 12 points in the first half. But we came out flat and she scored eight in the third. Our defense was intense, but offensively we were just cold.”
Davie did mount a rally. Johnson scored twice. Gracie Wilson snagged an offensive rebound, was fouled and hit one from the line. L. Dirks led a three-on-one fast break and hit Spaugh for two. Gentry hit a little eight-footer, and then L. Dirks hit a triple.
Davie closed the game on a 12-1 run, but the damage had been done.
The War Eagles shot 25 percent for the game, and West (8-13 overall) shot 42 percent by hitting 17 of 32 two-pointers. In recent games, much of Davie’s offense had come from the free-throw line – but it was only 3-6 from the stripe in this one. West kept Davie alive by missing nine of 10 foul shots.
Johnson had 12 points, seven rebounds and five steals. L. Dirks had seven points, 11 rebounds and two assists in her final basketball game. Spaugh had five points, five boards and five steals. Oakes and Gentry had four points each. Rankin had two points and Wilson controlled five rebounds.
When you reflect on the whole season, the good far outweighed the bad for the War Eagles. They posted their longest winning streak (four) since 2014-15. They went 7-7 in the CPC after having five league wins the previous five seasons. They ended a 14-game losing streak to West. In a 70-63 win over Parkland, they scored the most points in 138 games. They were fourth in the CPC after finishing sixth, sixth, sixth, sixth and fifth the past five years.
“They were upset (about the loss), which was different,” Adams said. “Last year when we lost the last game to Glenn, they weren’t upset because they weren’t used to winning. Now they’re getting used to winning and when they lose, it hurts. When you have that, it means you have pride in what you’re doing. That disappointment is going to have them working harder in the offseason.”
Notes: Davie and West met for the third time in 11 days. Davie won 45-43 on Feb. 4, and West won 60-45 on Feb. 9. … L. Dirks and Kaylyn Nuckols were the only seniors on the team. … The top three scoring averages: Gentry 11.9, Johnson 9.6 and L. Dirks 6-5. … The first-round scores: No. 1 East Forsyth 54-26 over No. 8 Mt. Tabor; No. 3 Reynolds 65-50 over No. 6 Parkland; and No. 2 Reagan 58-34 over No. 7 Glenn. In the semifinals, Reynolds won 34-32 over Reagan and East Forsyth won 36-29 over West. East beat Reynolds, 55-39, in the final. … Three CPC teams made the 4-A playoffs: East (seventh seed out of 32 in the West Region), No. 17 Reagan and No. 19 Reynolds.