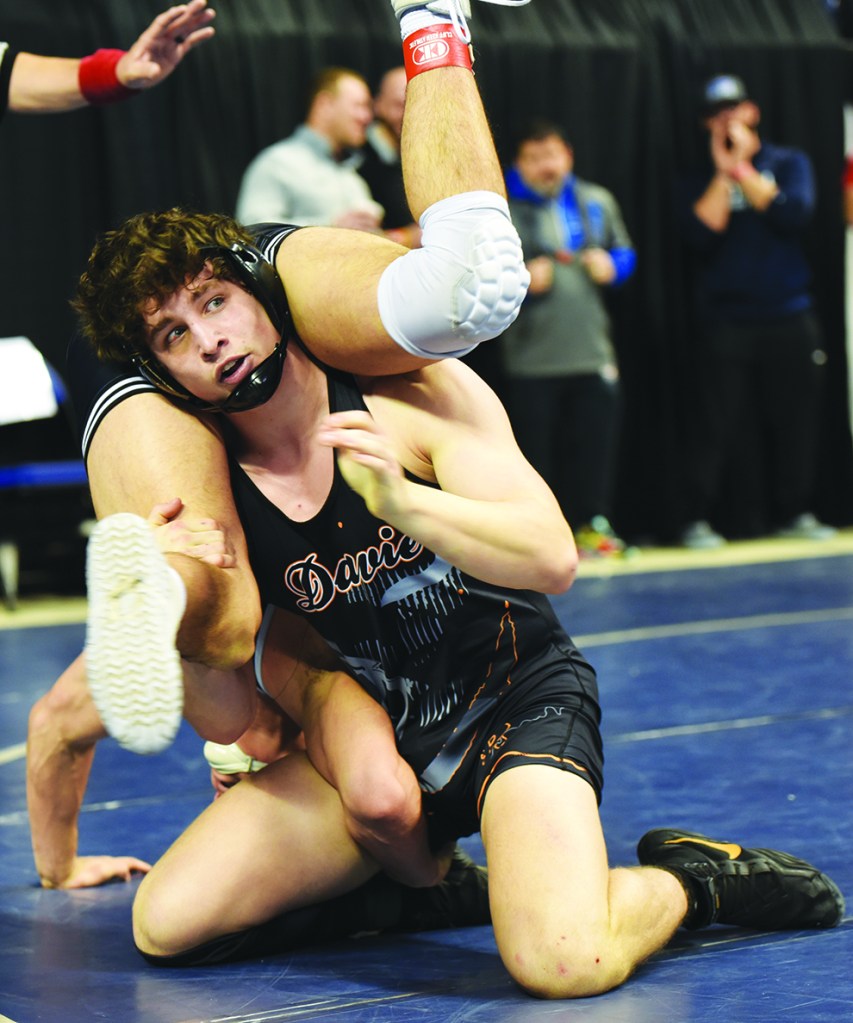 Hunter Testa nearly pinned his opponent in the semifinals and wound up third in the state at 182. Collin Bailey (152) and Jack Jarvis (170) were place-winners as they reached the consolation finals. Brysen Godbey posted two victories before falling in the “blood round.”
Things could have been better for the War Eagles in the state wrestling tournament at the Greensboro Coliseum on Feb. 17-19 – but not much better. Despite only having four guys, Davie finished eighth out of 84 teams.
Laney was the team champion with 159 points. Davie had 56 in the best showing from the Central Piedmont Conference. League rivals West Forsyth (20th with 28 points), Glenn (35th with 14), East Forsyth (40th with 11) and Reagan (tied for 68th with 0) trailed the War Eagles by some distance.
“To take four kids and finish in the top 10 in the state, I think we did alright,” coach Perry Long said. “That’s pretty dang good, man. We had a great season.”
Testa won by pin and major decision in the first two rounds, pushing his winning streak to 24. Although the Davie sophomore lost in the semifinals, he gave Laney senior Devon Bell all he could handle. Bell eventually pulled away for a major decision and went on to take the gold medal.
Long said: “Hunter had (Bell) on his back. He had a chance to stick him twice. Hunter wrestled his tail off.”
Testa: “We were back and forth the whole match. He’s a really good wrestler and I think we had a pretty good match.”
In the finals, Bell pinned Kannapolis senior Gavin Hartsell to complete a 41-0 season. In the regional final the week before, Testa beat Hartsell 5-3.
“It would have been a better match with Hunter and Bell in the finals,” Long said.
Despite his first loss in a long time, Testa wasn’t done. He won 6-3 and 7-1 decisions to nail down the bronze medal. He went 34-3 for the season. The two-time state qualifier’s career record is a splendid 62-6.
Long: “Hunter beat the No. 2 kid in the regional, and at the state he beat the No. 4 and the No. 5 in his weight class.”
Testa: “I’m proud at how I came back. It was unfortunate that I couldn’t win out or compete for first, but I did enjoy getting to wrestle (in the consolations) with some good competition and get third place.”
Seniors Bailey and Jarvis both lost in the quarterfinals, but both deserve a salute for rallying in the consolation rounds and placing fourth in their respective weight classes.
Bailey was pinned by Lumberton’s Jackson Buck. He ripped off three wins to reach the consolation finals, where he lost again to Buck (49-3 record).
After pinning in the first round, Jarvis lost a decision to Chapel Hill senior Alexander Gunning. Just like Bailey, Jarvis put together three wins and advanced to the third/fourth match, where he lost 8-7 to Cary junior Sam Grena (51-4).
Bailey qualified for the state for the third time and went 44-7. His career record is 147-34, which is good for 10th on the all-time wins list.
Jarvis qualified for the state for the fourth time and went 39-6. His career record is 138-22 and he will go down in program lore as one of 12 state champions. Last season he went 30-0 and won it all at 170.
“When you lose as a senior, some of those seniors don’t even continue,” Long said. “But Collin and Jack came back and got on the podium, which is awesome for those guys. Because that is hard to do as a senior.”
Godbey fell one win short of placing at 220, but just making the state as a sophomore is an accomplishment.
After opening with a pin, Godbey was stuck by Pineville senior Will Brock. Then he split two consolation matches. Take a bow, Mr. Godbey, for going 40-10 after a 10-10 freshman season.
“I told Brysen he had a wonderful season,” Long said. “He jumped miles from his freshman year.”
The only former War Eagles who have more career victories than Bailey are Michael Waters (203), Aaron Hollifield (182), Russell Hilton (181), Hunter Smith (179), Alex Gobble (159), Ryan Smith (158), Zack Vernon (157), Patrick Lowery (150) and Lake Billings (148).