Testa too much for state wrestling champ: Davie sends 4 to finals 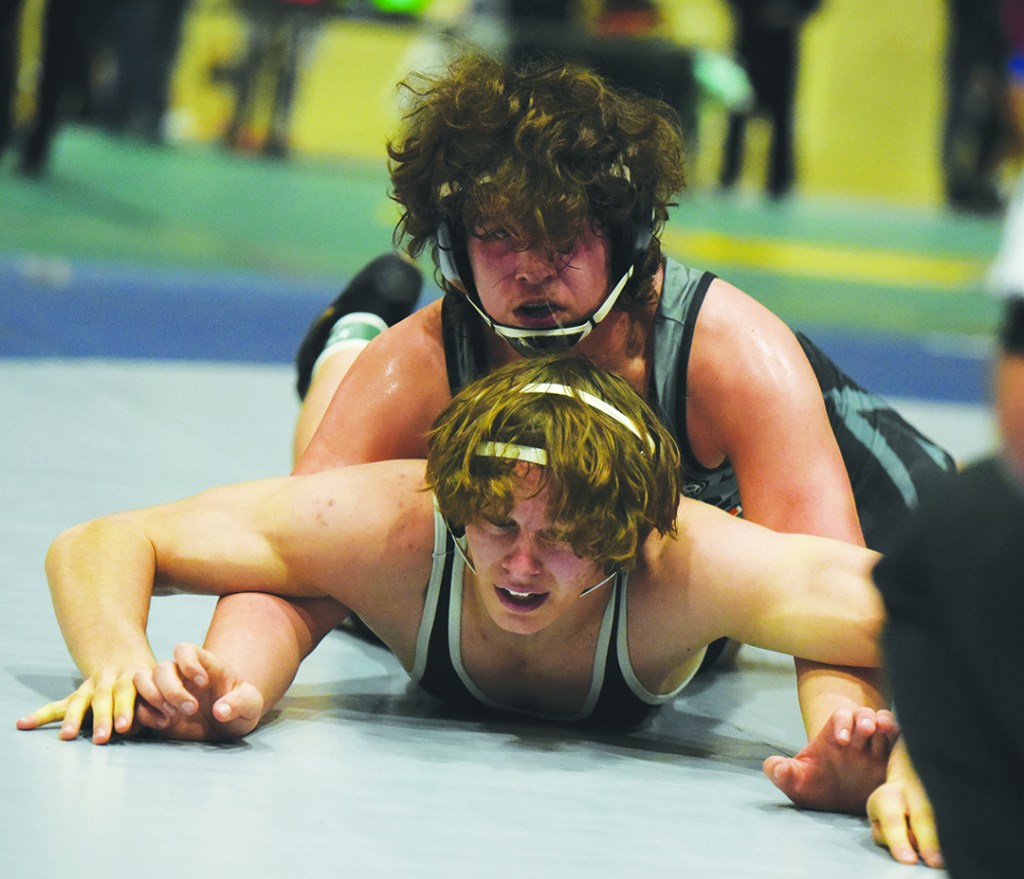 Hunter Testa of Davie’s wrestling team knocked off a defending state champion in the regional final. Anything else you need to know about Davie’s brilliant sophomore?
The War Eagles qualified four for the state tournament and finished sixth out of 29 teams in the Midwest 4-A Regional at Cabarrus Arena on Feb. 11-12. The top four in each weight class earned state berths.
Testa, Davie’s lone champion, opened with a pin. Then he wrestled the maximum 18 minutes over his next three matches, winning grueling decisions of 5-1, 6-4 and 5-3.
Coach Perry Long said: “Man, he wrestled well. He was nervous all week about this region. People were talking about how tough this region was going to be, and he talked all week about wanting to make the states. I told him it’s about controlling your emotions and having fun. And that’s what he did.”
Testa: “Yeah, I was a little nervous going into it. But I talked to my coaches and my family and just kept working – kept practicing and tried to put all that to the side and just wrestle.”
After placing third in the regional as a freshman, the raging sophomore is 30-2 with a 22-match winning streak. His two-year record is 58-5. In the 182-pound final, Testa faced Kannapolis senior Gavin Hartsell, a three-time state qualifier who captured the 3-A state title at 182 last summer. Testa squeezed out a 5-3 win.
“He’s a good wrestler and I enjoyed the chance to compete with him,” Testa said. “I try to go into every match the same – put all the nerves aside and do what I’ve been practicing.”
Davie’s defending state champion, senior Jack Jarvis, punched his state ticket for the fourth time, taking second at 170. He had two pins and a major decision before running into Hickory Ridge junior Tomas Brooker (52-3 record).
“We’re going to work on some things from the Hickory Ridge match,” Long said. “(Brooker) is real tall and lanky. We’ve got to figure some things out to beat him, but Jack beat him last year so we know he can.”
Senior Collin Bailey became a three-time state qualifier by grabbing third at 152. After getting a first-round pin, Bailey suffered an excruciating quarterfinal loss to Lake Norman senior Brody Neal. Although Neal ultimately pinned Bailey in overtime, the margin between staying in the winners’ bracket and having to fight through the consolation rounds was razor-thin.
“It was a 1-0 match (in Bailey’s favor in the third period),” Long said. “Collin was riding (Neal) out with only 30 seconds left in the match. Collin put double boots in. The official said he put in a figure four around the waist and gave (Neal) one point to tie the match.”
Bailey showed resilience from that heartbreaker. He had to win three straight to keep his senior year alive, and he did just that with a pin and two decisions. And then in the consolation finals, he got payback against Neal, 1-0, to cap a 5-1 tournament.
Brysen Godbey will make his first state appearance after taking fourth at 220. His wins were a major decision, two pins and a decision. His 38-8 sophomore record suggests there isn’t much of a ceiling between now and 2024.
“Sometimes a sophomore can’t handle the emotion part of it, but Brysen came through,” Long said.
•••
The talent level at Cabarrus Arena was absurd, and seven War Eagles failed to crack the top four. That Sam Collins, Lane Hill, Ramiro Gutierrez and Isaac Webb are seniors deepened the hurt.
“I feel bad for the guys who got tough draws,” Long said. “It was heartbreaking for the guys that didn’t make it.”
After opening with two pins, Hill endured a painful loss in the consolation semifinals – one step from qualifying for the state for the third time.
“Lane was winning and had some questionable calls that went the other way,” Long said.
Collins pinned three of his five opponents, only to fall one win short.
“Sam wrestled hard,” Long said. “You hate to see these seniors go out not having the chance to wrestle in the state tournament.”
Notes
• Davie scored 91 points without filling spots at 106, 113 and 195. … The five teams that outscored Davie were Lake Norman (156.5), Northwest Guilford (146.5), Mooresville (119), Hickory Ridge (118) and West Forsyth (92.5).
• Bailey and Jarvis will carry 40-5 and 35-4 records, respectively, to the state meet.
• Webb, a three-time state qualifier, went 28-10 as a senior at 160 and 129-42 for his four-year career. … Hill was 39-6 as a senior and 112-28 for his four-year career. … Collins’ senior record was 25-10. … Junior Lawson Hire went 2-2 at 120, while Gutierrez (145) and freshman Ryder Strickland (285) had one win each. … Hire went 23-13 for the season, Strickland 16-15 and Gutierrez 11-7.