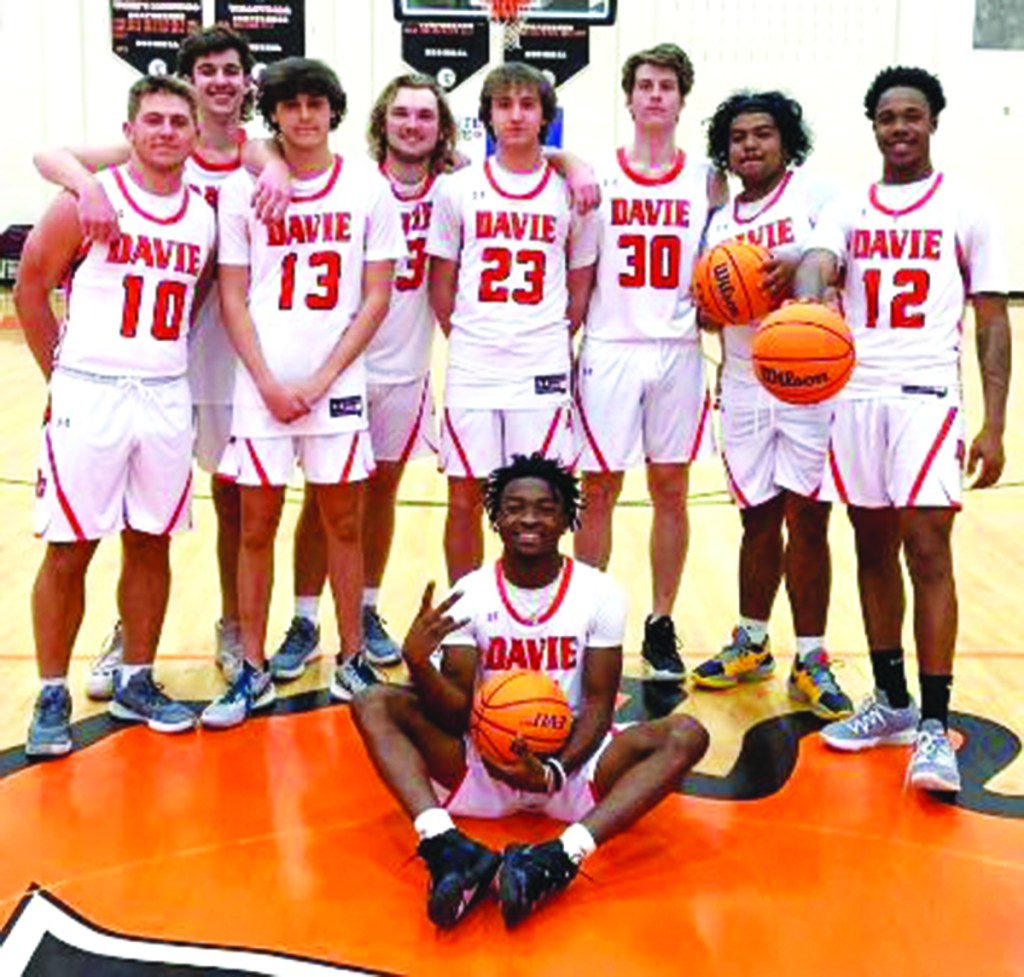 You can label it the biggest win in Bruce Wallace’s young tenure as the Davie varsity boys basketball coach. It came against a Glenn team that beat Davie by 17 on Jan. 14. It came on Senior Night for nine War Eagles. It came after Davie dug a 7-1 hole in the opening moments.
It was a great, great performance.
“We played lights out,” the first-year coach said after Davie’s 78-56 masterpiece. “I’m so happy for them.”
Davie 69, Parkland 52
Three days before the Glenn game, the War Eagles traveled to Parkland. It was no piece of art, but Davie did what it had to.
“We won and that’s what matters,” Wallace said.
Parkland’s record is woeful (2-19 overall), but you still have to show up and play. The Mustangs only lost by three to Reagan in their previous game, and Reagan swept two from Davie.
Davie led 32-23 at halftime, but Parkland started the third quarter with four straight successful shots and shaved Davie’s lead to 36-31.
Then Davie restored order with a 9-0 run. Alex Summers hit a 3-pointer, his second of the quarter, and Za’haree Maddox scored four points in 14 seconds on a pair of steal-and-layup plays to push the margin to 45-31.
It was 45-36 when Davie knocked out Parkland with a 10-2 run. Maddox, Tate Carney and Blake Walser provided the offensive punch as Davie extended the margin to 53-36.
Maddox had 24 points, five steals and four rebounds. Walser had 12 points and 13 rebounds, giving him 30 points and 20 boards in two games. Zymere Hudson had 11 points, six rebounds and four assists. Summers had six points, three assists and two steals. Carney had six points, four rebounds and two steals. Jake Powers (four points, five rebounds), Max Junker (two points, three rebounds), Coleman Lawhon (two points) and Landon King (two points) rounded out Davie’s scoring.
“Whenever it got close, we got a steal or got a basket,” Wallace said. “We made it a game by missing free throws. We missed six straight free throws and they cut it to nine.”
Davie 78, Glenn 56
The War Eagles found themselves behind 7-1 after a couple of minutes. But from that point on, they absolutely blitzed the visiting Bobcats on Feb. 11.
“I came out with a specialized defense for them, and it didn’t work,” Wallace said. “The kids were even like: ‘Yeah, this is a good game plan.’”
Davie stunned Glenn with a 35-15 run to end the first half, which resulted in a 36-22 halftime advantage.
“We couldn’t guard them man, so we went 2-3 zone,” he said. “They rained 3s on us at their place and we sat in a 2-3 zone (this game). But we were active and knew where the shooters were.”
Davie got massive games from the backcourt duo of Maddox and Hudson. Maddox had 28 points, five assists, four rebounds and four steals. He put on a drive-and-either-score-or-draw-the-foul show, resulting in his 12th career 20-point game.
“Za’haree put on a clinic,” Wallace said. “They were trying to guard him one-on-one, and that’s just not a good idea.”
Hudson scored 19 points on 10 shots and made three steals. Summers made three beautiful passes to a cutting Hudson, who drilled 8 of 10 field goals.
“Zymere put on a cutting clinic,” Wallace said.
Jake Powers had a highlight-reel play when he saved the ball from going out of bounds at the Davie baseline. He threw a behind-the-back pass to Hudson, who finished the play with two points to push Davie’s lead to 44-26.
Glenn tried to rally early in the fourth quarter, its 3-pointer cutting the margin to 53-44. Davie, though, wouldn’t let Glenn get any closer, a crushing 25-12 run making for a memorable Senior Night for Maddox, Hudson, Carney, Summers, Jake Powers, Walser, Junker, Caleb Earnhardt and JT Bumgarner.
“For us not to freak out because we didn’t get a few calls is a sign of maturity,” Wallace said.
Glenn was down for the count when Davie milked over a minute off the clock and got the ball to Walser, who was fouled, made both free throws and bumped Davie’s lead to 64-48 with 3:38 remaining.
Walser had 13 points and six rebounds. Jake Powers had seven points, four rebounds, two assists and two steals. Lawhon had four points. Jackson Powers and Junker had three points apiece. Summers had one point, four steals, three assists and three boards.
When it all comes together for the War Eagles, this is how they can look. They shot 52 percent (25-48), outrebounded the bigger Bobcats 30-27 and forced 17 turnovers. Meanwhile, Glenn shot 36 percent (18-49).
“Alex, Tate and Jake played great,” Wallace said. “All the seniors really contributed. I love those kids so much and I’m so excited for them. Every time they tried to trap and junk it up, Alex either made an extra pass or he hit a cutter. And he was rebounding when we looked tiny down there.”
Notes: Glenn (17-7) has lost four of five. At one point, it was 16-3 with a 14-game winning streak. … Davie (13-9) won its third in a row and clinched its fifth consecutive winning season. … Former coach Mike Absher and his wife Denise were on hand for Senior Night. … Davie tied for fifth in the eight-team CPC. The standings: East Forsyth 12-2, Glenn 10-4, Mt. Tabor 9-5, Reagan 8-6, Davie/Reynolds 7-7, West Forsyth 3-11, Parkland 0-14. … Wallace is almost certain Davie will make the playoffs. “Glenn’s coach said he thought we would make it if we lost to Glenn and Mt. Tabor (in the first round of the CPC Tournament),” he said. … Maddox is averaging 17.8 points, Hudson 13.5 and Walser 9.6.