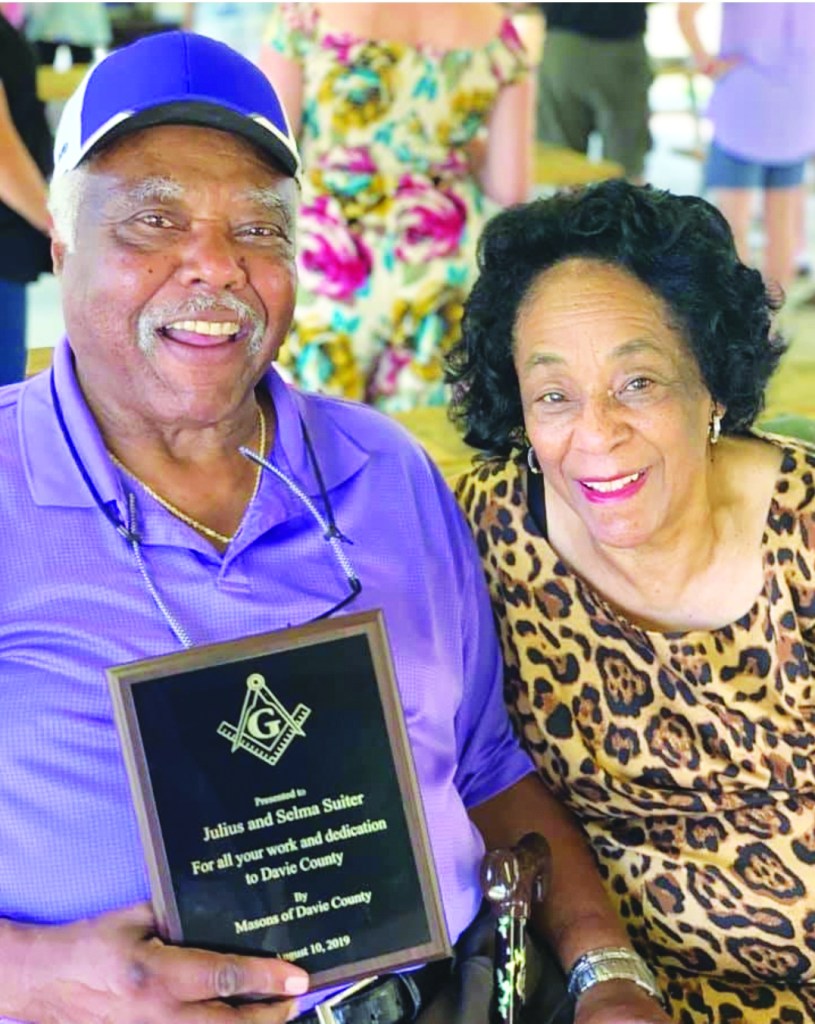 Julius and Selma Suiter with a lifetime achieved award they received from the Masons of Davie County.

Julius Suiter could be loud – really loud. When he spoke in a crowded room, people would listen.
Julius Suiter was outgoing – but not overbearing. He knew when to be quiet and when to speak up.
But most of all, Julius Suiter was fair, and Julius Suiter cared. It didn’t matter who you were.
He died last week, leaving behind wife Selma, daughter Brooke and son Brian and other relatives. Actually, he leaves behind an entire community.
Mr. Suiter had been a school teacher and coach, assistant principal and principal – at all grade levels and all in Davie County. He had taught at Central Davie before integration.
Growing up in Norfolk, Va., he ended up in Davie County to pursue his teaching career, Mr. Suiter leaves a lifetime of work that goes well beyond the classrooms and ballfields where many remember him.
“He was a billboard for our community,” said Terry Bralley, president of the Davie Economic Development Commission. Mr. Suiter was on that board when Bralley joined in 1979, and was until his passing, the longest serving member ever on the board.
“He was always selling the great things we had going on. A communicator with his booming baritone voice, he spoke with confidence and authority,” Bralley said. “He bridged many misunderstandings in the community and was a positive force that could pick you up in uncertain times.”
Bralley remembers one time when, as a young town manager, he had a meeting with residents along Campbell Road at a church. He was there to talk about improving water and sewer service to the neighborhood, but the residents were more interested in talking about past years of neglect. That was until Julius Suiter stood up and said: “This man says he’s coming here to help you, the least we can do is listen to what he has to say.”
He never had another problem that evening.
“Like many great leaders, he was trusted and could see beyond tomorrow and steadily and quietly got things done without the drama and emotion that sometimes cloud our sound judgment,” Bralley said. “Julius was always willing to listen and had a gift for uniting people.”
Many posted memories of Mr. Suiter on social media, including Marcia Beck Lambe, who remembers him tapping students on the head with his class ring when they weren’t paying attention. “Mr. Suiter is forever in our hearts and memories.”
Many remembered him calling them by their last name.
“He was always a fair man,” wrote Diana Daniel. “He didn’t care who you were. Everyone was treated the same.”
“He touched many lives and will be remembered fondly,” wrote Darwin Hollar.
“Mr. Suiter was a wonderful man in our community. He was always so great with the youth of Davie County,” wrote Beverly Haynes Marshall.
A service celebrating his life is scheduled for noon Friday, Feb. 4 at the Brock Performing Arts Center on North Main Street. The family will receive friends from 10-11:30 at the Brock.
Among those speaking will be long-time friend and local attorney, Hank Van Hoy, and his children, Brian and Brooke.
“Our father wanted the best for his family and he made sure he could provide what we needed to be successful,” said son Brian, speaking on behalf of the family. “One thing Dad said often was, ‘Make sure you help someone when you can.’ Well, I believe Davie County could see he made sure to live by that motto.”
It was important for his father to know his family was well taken care of, Brian said.
“Dad also wanted people to know that their families were important and to make sure they knew it. Dad very seldom said no to helping someone, he always believed people would do right by you if you let them know you believed in them. From his coaching days, to teaching history and driver’s education and being everyone’s principal … he gave kids hope, a belief in themselves and a lot of laughs along the way.
“He was hardworking, giving, quick-witted and had a way to get along with others. My mother would often say, ‘Everybody likes Suiter.’ He wanted the best for his family and the community his family lived in.
“He wanted the best for Davie County and made sure the county kept improving year after year. From the educational system to our businesses, the homes and everything in between, Julius Suiter believed in Davie County and gave his all.” 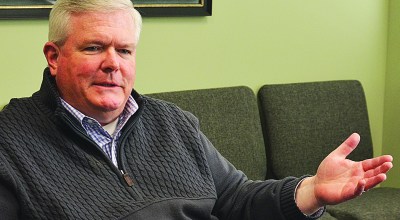