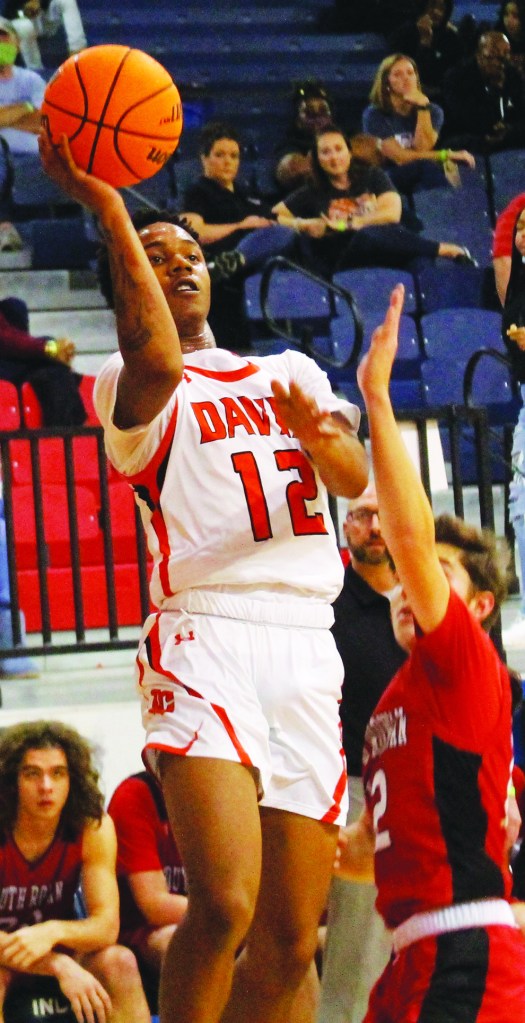 East Forsyth was just a little better than the visiting Davie varsity boys basketball team on Jan. 25, and unfortunately for the War Eagles, everyone had seen this movie – and various sequels – before.
They came up just short for the fifth time in the Central Piedmont Conference, this 43-39 setback following losses by three, two, seven and four points.
The War Eagles are 9-8 overall, have dropped three straight and are tied for fifth in the league at 3-6. The basketball gods will rarely allow you to win every close game, but Davie is frustratingly near, say, 5-4 or 6-3 in the CPC.
“We’ve got to capitalize on opportunities,” coach Bruce Wallace said. “We were three or four bounces away.”
Davie had a sluggish start, trailing 6-0 after three minutes. The deficit was 16-9 before Davie came up with a 15-9 run. Zymere Hudson and Coleman Lawhon hit 3-pointers. After Blake Walser scored on a post move, Lawhon hit another 3. Za’haree Maddox and Hudson scored in transition as Davie pulled within 25-24 at halftime.
It was a weird half. The War Eagles shot too good – 10 of 18 overall and 4 of 7 from the arc – to be behind. While they hit 55 percent, East managed the lead with 37-percent shooting (10-27).
“But we probably had eight turnovers,” Wallace said.
East tried to give Davie the edge in the third, missing 10 of 11 field-goal attempts. But Davie couldn’t take advantage, going 3 of 15. Four of its six points came on fast breaks – again we note, Davie is dangerous when it is able to run – as Maddox got a steal and threw ahead to Hudson and then Maddox assisted a Carney basket. The East lead after that ugly quarter was 33-30.
The key sequence: East got a second-chance bucket, then hit a 3 at the end of a 47-second possession to make it 38-30.
Maddox’s two free throws cut the margin to six, and the War Eagles had plenty of opportunities after that. But they were called for charging. They missed two open 3s on one possession. Hudson’s layup on the break was blocked; East appeared to commit goal-tending, but there was no call. Then Davie threw it the ball away.
But East kept letting Davie hang around. After Davie went 1 for 12 for a stretch, a Jake Powers inbound pass led to a driving layup by Hudson that pulled the visitors within 38-34. When Walser hit a mid-range jumper, it was 39-36.
The War Eagles, though, kept stubbing their toe. On top of that, they couldn’t catch a break. They had two turnovers and watched East extend its lead to 42-36. Hudson got a steal and sped downcourt. He scored as the whistle blew at :45. Block or charge? Charge was the call – no basket and score remains 42-36 instead of 42-38 and possibly 42-39.
Hudson hit a deep 3 to make it 42-39, but it was too little, too late by then.
“That was the toughest (loss) because we missed three or four wide-open ones (in the fourth) that we usually make,” Wallace said. “We should have been up by eight points and they were up by six.”
Hudson had a solid game with 14 points on 6-of-11 shooting to go with five steals, four rebounds and three assists. Walser had an efficient with eight points on six shots, and he also rejected six shots. Lawhon had six points and four boards. Jake Powers had five points, six rebounds and two steals. Maddox had four points and six assists. Carney had two points.
Notes: Second-place East (14-3, 7-1 CPC) won its fourth straight. … East edged Davie 57-54 on Dec. 14. … This was Davie’s fewest points in 37 games, dating to a 53-37 loss at East in January of 2020. … Davie’s shooting percentage plummeted to 35 percent for the game (16-45). East was worse at 32 percent (14-43), but that was offset by its substantial advantage the line (11-19 to Davie’s 2-3).