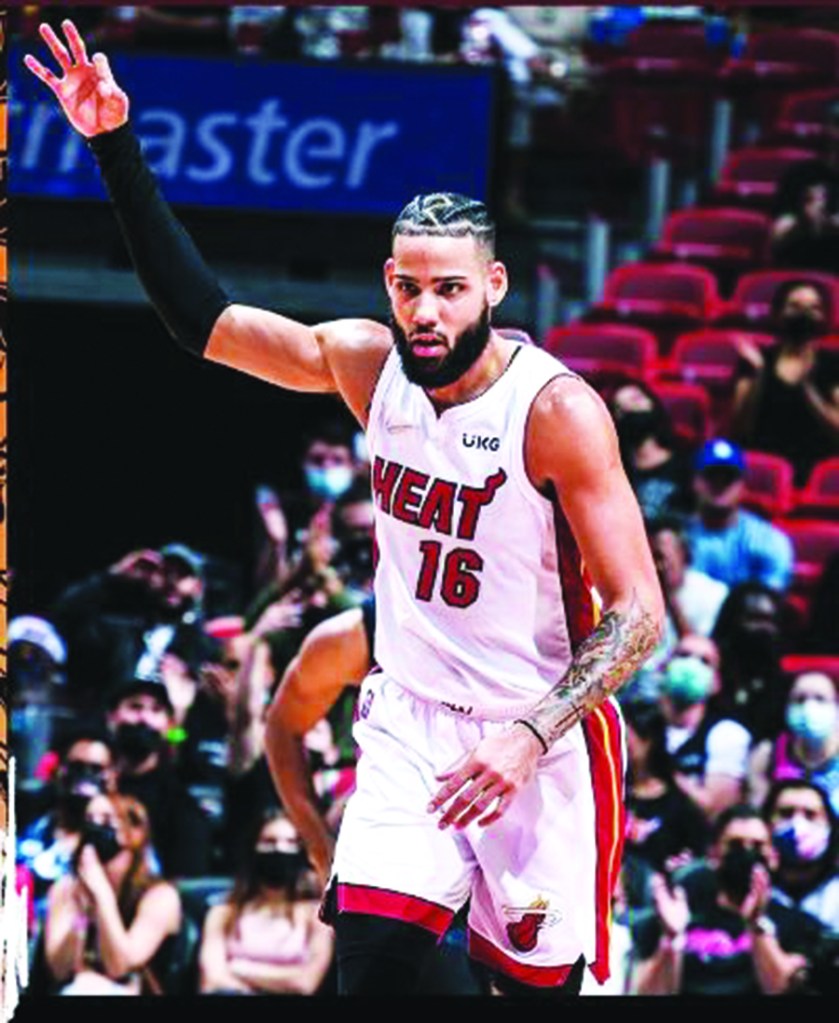 The Miami Heat appeared to be in some trouble in a home game against Portland on Jan. 19. They started the game without two prominent players and they wound up having to play without their top three scorers.
• Tyler Herro, who averages 20.7 points, 4.9 rebounds and 4 assists, was placed in the NBA’s health and safety protocols the day of the game.
• Point guard Kyle Lowry, who averages 13.4 points, 8.3 assists and 4.5 rebounds, was out for personal reasons.
• And 6-7 small forward Jimmy Butler, who averages 21.7 points, 5.8 assists and 5.8 rebounds, was ejected with 2:28 left in the second quarter.
That meant the Heat were without 40 percent of their scoring, and that meant a bigger role for Caleb Martin.
Martin wasn’t about to let Miami lose to the nine-point underdog. Miami’s 104-92 win was defined by Martin’s efforts in the middle quarters and the Heat’s suffocating defense in the fourth.
Martin jumped off the bench and delivered – wait for it – 26 team-high points, eight rebounds and two assists in 32 minutes as the Heat improved to 29-16.
Martin’s 11-point second quarter was a warmup; he poured in 15 in the third, keeping Miami within two going into the final 12 minutes. The fourth was all Miami.
“I had to come in and do a little bit extra,” Martin said. “When Jimmy’s out, guys have to step up. I try to emulate (Butler) as much as possible. So, whenever he’s out, I try to be Jimmy. Jimmy doesn’t expect any dropoff; he doesn’t like any excuses. You’ve got to dog it out.”
Martin’s impact in his first season in Miami – he was waived in the offseason by Charlotte after playing two years for the Hornets and signed a two-way contract with the Heat – has been a heck of a story.
Coach Erik Spoelstra said: “I love how much he puts into this, how competitive he is, how much pride he has on defense. He always says that he was just a scorer in college, but he was coached well. A lot of things were demanded of him. You could tell he had a lot of good habits before he got to us.”
Martin, who hit 8 of 12 field goals, 3 of 5 3-pointers and 7 of 7 free throws against Portland, is averaging 9.5 points and 23 minutes for the season. Through 35 games, he was also providing 4.0 rebounds while hitting 51.8 percent from the field, 37.9 percent from 3 and 71 percent from the line.
“I’m in a great situation and guys push me to be better every day and they allow me to be myself,” Martin said. “Obviously I’ve put the work in, so they give me the platform and allow me to use it. I’m forever grateful and I’m going to keep it going.”
Notes: “Red Bull” is a nickname teammates have given Martin “because of my energy,” he said. “And Red Bull gives you wings.” … This was Martin’s second-biggest scoring game. He had 28 in a win over Milwaukee on Dec. 8. … It’s possible Martin could be invited to participate in the NBA Slam Dunk Contest during all-star week in February. He is intrigued by the idea. “I would think about it, for sure,” he said. “I have some stuff I can definitely do. Me and my brother (Cody of the Hornets) grew up definitely doing some stuff. I feel like I’ve got more in my bag dunking-wise than him.”