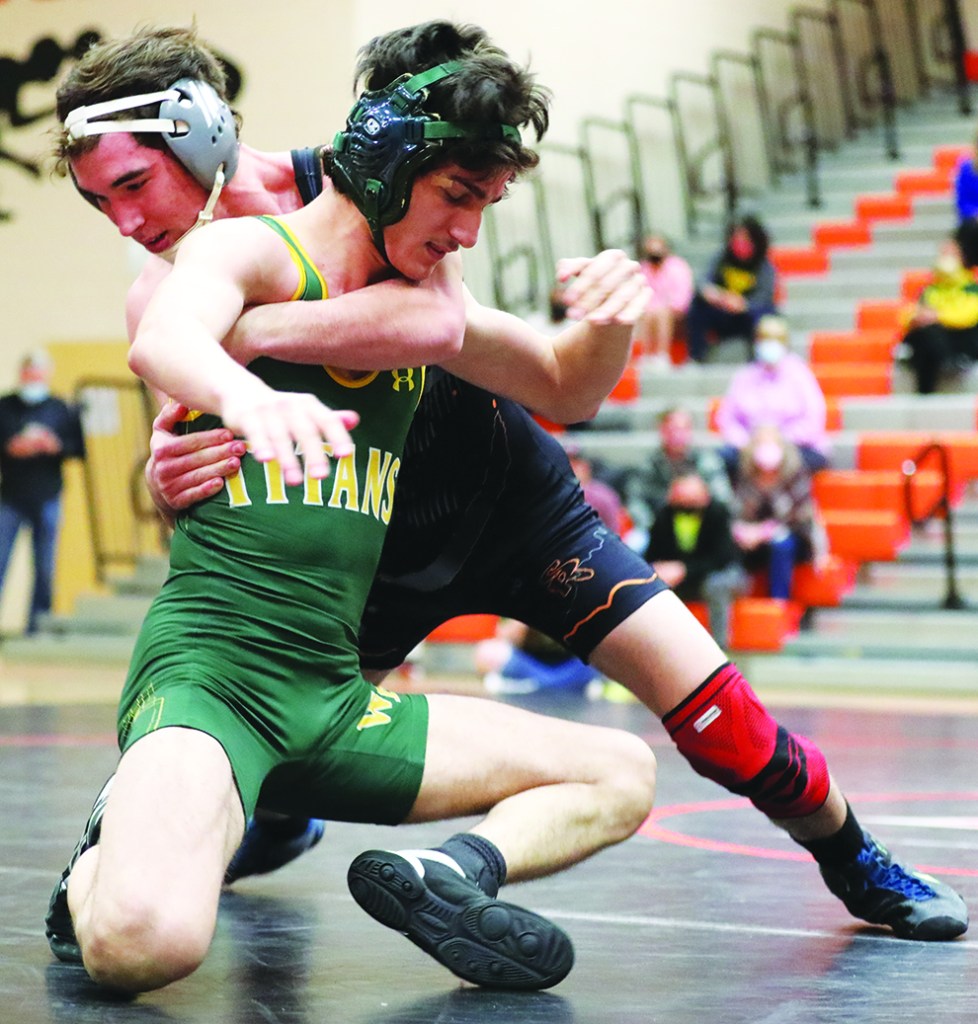 For the West Forsyth wrestling team, it was the kind of win that had the Titans walking on air as they left the Davie gym.
For the War Eagles, it was the type of loss that had them waking up in the middle of the night in a cold sweat thinking about how it could have been different.
“We had the matchups that we wanted,” Davie coach Perry Long said after a 39-33 home loss on Jan. 13. “It’s a hard loss, I’m not going to lie. This team is better than how we performed. I believe that in my heart.”
Although both teams have several Central Piedmont Conference matches remaining, this showdown, for all intents and purposes, decided the CPC championship. For the top of the league is always strong with Davie and West. The other six teams, though, are rarely capable of offering any resistance when facing the top dogs.
The win kept West (11-0, 3-0 CPC) undefeated. The loss ended Davie’s nine-match winning streak in the CPC.
The War Eagles (17-9, 2-1) came out blazing thanks to Sam Collins’ pin at 138.
“I didn’t expect Collins to pin (Parker) Broadus like he did,” said West coach Jason Hooker, who is a former Davie assistant. “I didn’t think we were going to get pinned. I thought it was going to be three (points) either way.”
“I was pumped,” Long said. “Sam got us started and did his thing. I was excited for Sam after being out (for a while) and coming back ready to wrestle.”
West’s hole got deeper when Collin Bailey pinned at 152 and Isaac Webb did the same at 160. Four weight classes in and Davie had an 18-3 lead.
Then there was a juggernaut of a matchup at 170, Davie’s defending state champion (Jack Jarvis) against Ziggy Malave. Malave swung the match with his 23rd pin of the season.
“Ziggy’s dangerous,” Hooker said after Malave improved to 25-4 and handed Jarvis his third loss of the season. “He’s extremely dangerous. I would put him against anybody. There was a kid who took second in Junior Nationals last year that Ziggy was beating the whole time until the last 15-20 seconds. So, yeah, Ziggy is going to be tough. Until Ziggy’s match, I was worried. On paper, we were the underdog, but I told my coaches that Ziggy could win this match and this could change the momentum.”
Hunter Testa came through with a decision to give Davie a 21-9 lead, but the War Eagles fizzled from there.
Aidan Meagher’s pin at 195 triggered a 27-0 run for the Titans, who won a decision at 220 before stacking up pins at 285, 106 and 113.
Lawson Hire kept Davie alive with a pin at 120. That shaved the deficit to 36-27, but Damian Cisneros’ decision at 126 settled the issue at 39-27 and reduced Lane Hill’s pin at 132 to a footnote.
The Titans stopped Davie’s 10-match winning streak and got payback for a 40-33 loss last season, when clutch wins by Adam Szewczyk and Hill lifted Davie.
Notes: In a sense, Lamont Monroe did well not to get pinned by Testa. “(Monroe, a senior) started wrestling last April,” Hooker said. “He’s been wrestling 10 months. If he’d started wrestling as a freshman, he’d be a world-beater. He’s beat some good guys this year.” … This was Davie’s first CPC loss since 38-36 to Glenn in January of 2020. … Davie is the defending CPC champion, but it will need somebody to pull a monster upset of West to have a chance to share first.