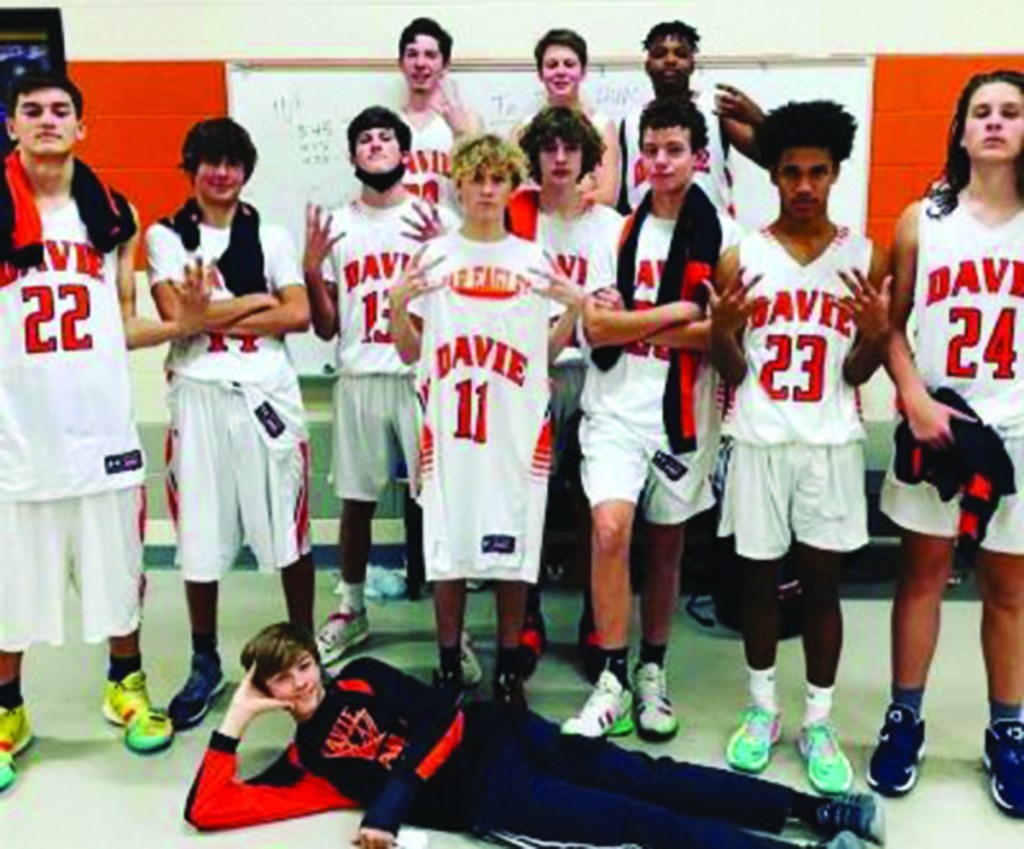 Adam Brown and the Davie freshman basketball team demonstrated mental toughness during a 54-46 win at Mt. Tabor on Jan. 4.
Its first game in 14 days resulted in the closest margin of the season.
The War Eagles punched Tabor in the mouth in the early going, soaring to a 15-3 lead. The Spartans, though, showed toughness by closing within 15-12 at the end of the first quarter.
Davie led by five at halftime and by 10 after the third. It wasn’t over, however. Tabor rallied within 40-39. That’s when Brown made sure Davie would raise its record to 4-0.
“Adam gave us a big lift,” coach Mike Dinkins said. “He hit back-to-back 3s and then we had a basket by Elliot (Erlandsson) to extend the lead.”
Brown’s second and third 3-pointers of the game sent Davie to a 14-point lead with only 1:36 left. He finished with a team-high 13 points.
It wasn’t a flawless win. Davie went 6 of 14 at the free-throw line, continuing a pattern.
“Free throws are going to get us before it’s over with,” Dinkins said. “Free throws are going to end up biting us in the butt.”
Connor Hood had 10 points and Cameron Owens eight. Erlandsson and Wade Bomar had seven each and Landon Waller six.
Davie 59, Atkins 40
After a close first quarter, the War Eagles started raining 3s and destroyed the Camels in the second quarter on the way to a road win on Jan. 13.
Bomar hit two 3s in the second. Owens, Erlandsson and Logan Vanderweerd hit one each as Davie outscored Atkins 22-4 in the period.
Owens was terrific, hitting four of Davie’s 10 triples and scoring 19, one above his previous high.
“It was his best game on both ends of the floor,” Dinkins said. “He created a lot of transition stuff with his defense.”
Erlandsson had 7. Bomar and Hood had 6 each. Josiah Johnson, Brown and David Patton had 5. Vanderweerd had 3, Waller 2 and Zachary Hill 1.
“We ran 14 different defenses tonight,” Dinkins said.
Davie 77, Glenn 49
Glenn strutted into the Davie gym on Jan. 14 with a 10-1 record. The War Eagles were unfazed. They didn’t just win. They wiped the floor with Glenn.
“It’s the most satisfying win in a long time,” said Dinkins, who was grinning like a Cheshire cat.
It was the Owens show. He sank three triples, went 4 for 4 from the line and exploded for 29 points. In a span of two games, he raised his average from 9.7 to 14.5.
“Outstanding game,” Dinkins said. “I told him: ‘You’re going to score a bunch of points because they can’t keep up with you.’ Cameron went off. When he took it to the basket, they couldn’t stop him.”
The first half was a close battle, Davie leading 27-23 at halftime. But the second half saw an utter destruction of the Bobcats, who were outscored 50-26.
Owens’ outrageous output doesn’t tell the whole story. Erlandsson (15 points) reached double figures for the third time. Hood (13) cracked double digits for the fourth time. Waller and Brown contributed eight each. Bomar had two. Johnson and Patton had one as Davie posted its highest scoring total of the season.
“Our two big boys (Erlandsson and Waller) really controlled the boards,” Dinkins said. “They had some great outlet passes.
“Connor had several nice passes to (Erlandsson and Waller) for easy buckets. I hear he’s a better football player, but he’s a pretty darn good basketball player. We keep him on the floor all the time.”
Davie is 6-0 with an average winning margin of 17 points.