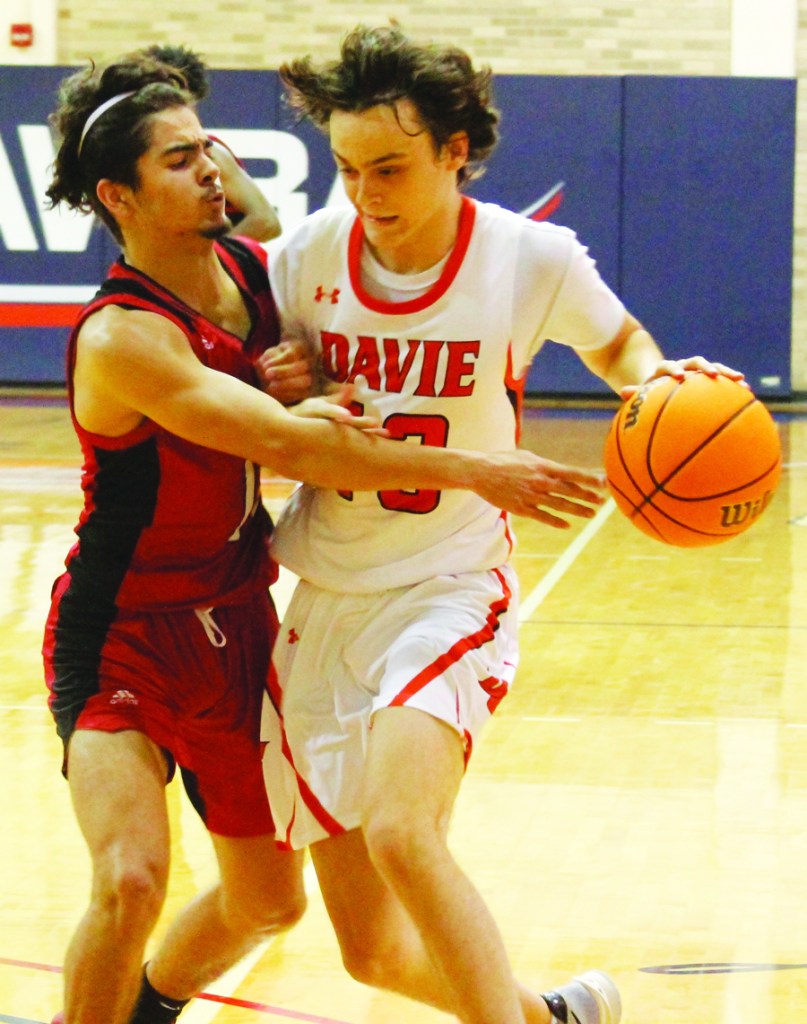 Davie’s varsity boys basketball team connected on its first seven 3-point attempts and nine of its first 10 against South Rowan in the first round of the Sam Moir Christmas Classic at Catawba on Dec. 28. Caleb Earnhardt, who had scored eight points in five appearances, did not miss a shot while scoring 14 first-half points.
Everyone expected the second-seeded War Eagles to breeze over the low-profile Raiders – and they did 67-39 – but this was unbelievable long-range shooting.
While Davie (7-3) extended its winning streak to three, No. 7 South, which moved up to the seven seed when Kannapolis had to drop out at the last minute because of COVID issues, fell to 0-10. The game isn’t played on paper, but all the common-opponent signs suggested a major mismatch. South lost 80-28 to Reagan; Reagan beat Davie at the buzzer, 52-50. South lost 71-12 to West Rowan; Davie handled West 61-47.
Earnhardt stole the show shortly after he checked in with 3:43 remaining in the first quarter. With 3:19 on the clock, Za’Haree Maddox dished to Earnhardt, who was set up 22 feet out on the right wing. He made the 3 to provide a 23-6 lead. Less than two minutes later, Earnhardt splashed a 3 from the same spot.
“Caleb’s been practicing really good,” coach Bruce Wallace said. “I didn’t tell anyone but I knew I was going to put Caleb in first off the bench because he’s been working hard and I thought he deserved a shot.”
Wait. There was more from Earnhardt. He fired from the left corner with 45 seconds left in the first quarter, and the 3 ripped the net. Late in the second quarter, Alex Summers inbounded to a cutting Earnhardt, who laid it in. On the final play of the first half, Summers kicked the ball to Earnhardt on the left wing, and he made another one.
In an explosion that nobody saw coming, Earnhardt’s halftime line was 14 points on 5-of-5 shooting, including 4-4 from 3-point range.
“He’s been raining 3s on our guys in practice,” Wallace said of the senior. “I’m super excited for him.”
All 13 War Eagles saw the floor in the first half, which ended with Davie in front 44-19. Summers drained a pair of 3s. Maddox, Tate Carney, Hayden Williams and JT Bumgarner buried one each as Davie shot 15 of 30 for the half, including 10-17 from deep.
“We put on a shooting clinic in the first quarter,” Wallace said.
Earnhardt didn’t score in the second half but still paced Davie with those 14 points. Maddox and Summers had nine each. Jake Powers had six. Landon King, Carney, Zymere Hudson and Max Junker had five. Bumgarner, Hunter Davis and Williams had three.
Notes: Davis hit Davie’s only 3 in the second half. … Davie Hall of Famer Sean Stevens was a special guest at practice as Davie prepared for the 49th-annual tournament. Stevens is Davie’s No. 6 career scorer with 1,232 points. He set a then-state record with 12 3s in one game. He holds the Davie season record for 3s with 127 in 2001-02. He authored four 40-point games. “We brought in Sean to talk to the team during our shoot-a-round,” Wallace said. “I think he really helped our guys focus and settle down. When they hit the floor, they were ready to go.”

Reynolds returning to 49ers for one more season