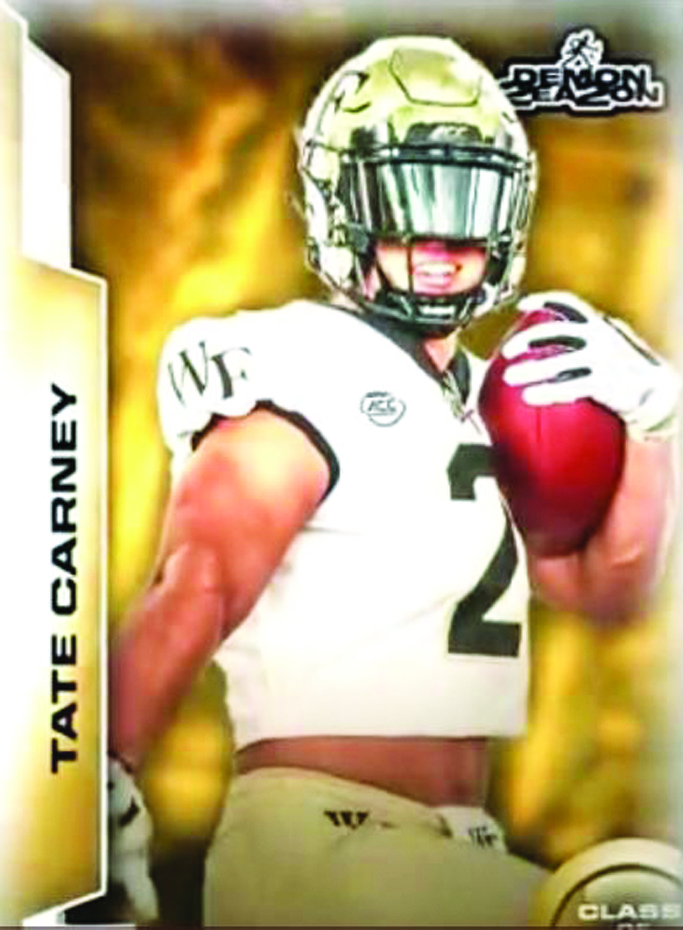 Tate Carney and Spencer Williams, who will be a part of Davie War Eagle lore forever, will take their talents to the ACC in 2022, with Carney signing a scholarship with Wake Forest and Williams signing with North Carolina.
Tate will follow in his brother’s footsteps. Cade Carney was a Wake running back from 2016-19, and he left his mark on the program, ranking seventh in career rushing yards (2,446), seventh in career rushing attempts (565), a tie for seventh in career rushing touchdowns (21) and 12th in season rushing yards (1,005 in 2018).
Tate, a four-year varsity player from 2018-21, will go down as one of the greatest Davie football players of all time. He tied a state record with eight TDs in one game. He owns Davie records for rushing yards in a game (327) and career TDs (79). He’s the No. 2 career rusher and he was so versatile that he’s No. 5 in career receiving yards.
“He’s a strong ball carrier with good ball skills,” Wake running backs coach John Hunter said. “He has the ability to break tackles by making you miss or running through tackles. He’s similar but probably a little more athletic at this stage than his older brother. Cade was a leader, a two-time captain and a heck of a ballplayer. His play inspired his teammates, and I see Tate doing the same thing. He’s a natural leader. I think he’ll eventually be a captain. He’s a playmaker. Whether he’s running the ball or we’re throwing to him, he’s versatile in that respect.”
Nowadays a lot of Division-I football signees graduate from high school after the first semester of their senior year and early enroll in college so they can practice in the spring, get a head start on their academics and get acclimated to the speed of the game.
Tate decided to go the traditional route. He’s playing basketball for Davie. He’s savoring every bit of his senior year. Wake can wait until the summer.
“I did go back and forth with the idea, but I felt like I missed out on a normal high school experience because of the COVID year,” he said. “I really wanted to enjoy the last part of the year with my friends to try and make up for some of that lost time.”
“I told him: ‘If you have to go to college and your coach says you can’t play basketball, you’re not upsetting me or letting anyone down,’” basketball coach Bruce Wallace said. “I think he really wants it for the camaraderie and the brotherhood, and that’s awesome. He’s a great leader. The fact that his parents (Carl and Teddy Carney) and the coach at Wake Forest (Dave Clawson) encouraged him to play basketball is awesome.”
Ask coaches about Tate and they can’t say enough good things. Davie football coach Tim Devericks marveled at his team-first attitude.
“Tate is the most humble player,” Devericks said. “In the weight room, he would finish his reps, then walk to another rack to encourage others or demonstrate the proper form. He would pick up new running back drills from camps he attended, and then after practice he would get the other running backs to go through the drills with him to not only make him better but those around him.”
Wallace added: “He’s never been cocky. Even on the football field, he’s never been one to brag. He’s always thanked his family and God.”
Williams Headed To UNC
The 6-5, 260-pound Williams is an incredible talent in track & field. He captured the 2021 4-A state championship in the shot put with a throw of 60-2, and he was second in the state in the discus at 169-8.
He received scholarship offers from Arizona and UNC. What did he think of Arizona?
“Arizona was a really cool school with good academic resources for their athletes,” he said. “I really liked the coach and everything, but it’s really far away. That was the big problem.”
He signed with the Tar Heels in November, about a month before Carney inked with the Deacons.
“I went there and got to know the coaches and other athletes, seeing the new facility that they just remodeled,” Williams said. “I already knew a lot about Carolina’s academics, but it was really cool learning more about their program and the culture there. Being close to home is what made me ultimately choose to go to Carolina.”
Williams is currently ranked No. 4 in the country in the shot put in indoor track. This spring he will attempt to join a short list of two-time state champions. And then he’ll head to Chapel Hill, something that is still beyond his belief.
“It feels surreal,” he said. “I remember when I wasn’t even throwing 30 feet in shot put, and now to think I’m going to be training with other college athletes and a coach (throws coach Amin Nikfar) that I’ve heard about for years. To think he’ll actually be my coach next year is surreal.”