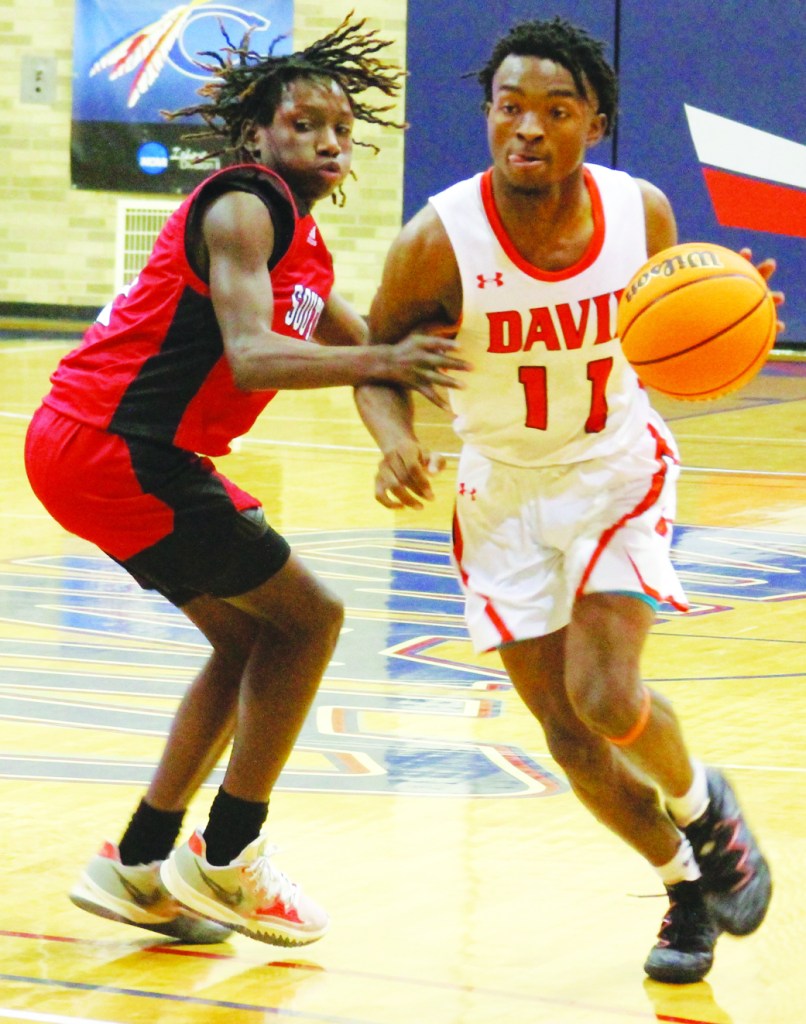 Senior guard Za’haree Maddox tried to bring Davie all the way back with 31 points. - Photo by Mark Floyd

Za’Haree Maddox and Zymere Hudson came through with career-high scoring performances. The Davie varsity boys basketball team shot 56 percent for the game and scored 45 points in the second half.
Believe it or not, it wasn’t enough.
Credit Juke Harris’ first-half awesomeness. Salisbury was crazy good in the first 16 minutes and rode a 51-33 halftime lead to victory, the Hornets barely holding off Davie 83-78 in the Sam Moir Christmas Classic semifinals on Dec. 29 at Catawba.
Second-seeded Davie slipped to 7-4. The No. 3 Hornets rose to 6-3 with their fourth straight win.
In the first half, Salisbury looked too good for Davie. Maddox’s long pass to Blake Walser for a layup pulled Davie within 14-12, but Salisbury would hit three straight 3-pointers and 4 of 5 to carve out a 37-21 lead. The War Eagles could only shake their heads when Savion Freeman swished a halfcourt shot as the second-quarter horn sounded to make it 51-33.
Harris, a 6-4 sophomore, torched Davie with 19 first-half points, including four 3s, as Salisbury connected on 18 of 32 shots. On top of that, it went 8-16 from long range in the half.
“That’s the best first half of basketball I’ve ever seen a team play,” coach Bruce Wallace said. “If they play like that the whole year, they will win the 2-A state championship and they would be a top 10 4-A team. That was an offensive clinic that I’ve never seen as a player and from coaching for nine years. That’s a Division-I player if you hit shots like (Harris did). He’s phenomenal.”
Wallace’s halftime message?
“They were hitting step-backs with hands in their faces. They can’t hit those all the time,” he said. “Kobe Bryant didn’t hit those all the time. I was like: ‘Guys, you’ve just got to chip away.’”
When the Hornets extended the margin to 57-36 early in the third, at which point they were 21 of 35 from the field, nobody thought a Davie win was possible.
But the game changed. Walser’s putback, Landon King’s free throw and a backdoor pass from Maddox to Hudson cut the Davie deficit to 65-60 with 4:44 remaining.
Davie got within five on six occasions. Maddox hit a 15-foot pull-up to make it 69-64. Walser scored off an offensive rebound to make it 71-66. Salisbury senior Cam Stout nailed a triple to push the margin to 74-66, but Davie kept coming back. Jake Powers gave an assist to Walser. Tate Carney buried a 3. Maddox scored on a blow-by drive.
Maddox was unstoppable with his crossover dribble and penetrating moves. He scored 31 points, handed out nine assists and made four steals. He hit 12 of 20 field goals, surpassing his previous career high of 28. He delivered the most points in 55 Davie games (Michael Walton had 31 in a 67-62 win over West Forsyth in February of 2019).
“I’ve got to be the leader on the team,” Maddox said. “At halftime it was about not giving up and playing hard. We got our confidence going and the hoop got bigger for us.
“Za’Haree is one of the better guards in the area,” Wallace said. “When you ball pressure him, it’s not going to be a good time because his crossover is that good.”
Hudson’s career high of 21 – he had 20 twice earlier this season – featured 8-of-14 shooting.
“Zymere is one of the better guards in the area, too, and (Maddox and Hudson) do a really good job of playing together,” Wallace said.
With Davie behind by six, Maddox passed to Carney in the deep left corner. Carney sank a breathtaking 3 with :17 remaining. Davie’s fifth straight successful shot had sliced Salisbury’s lead to 81-78, and then Jake Powers and Hudson had a Hornet trapped on the baseline on Davie’s end of the court. The Hornet managed to split the double-team at :12 and Stout had leaked out. A long pass led to a Stout dunk as time ran out.
“If we’d had a little more time, maybe we would have won,” Maddox said.
Wallace walked out of Goodman Gym knowing Davie had played its heart out. Walser (12 points, 6-7 shooting, six rebounds) and Carney (11 points, three 3s, five rebounds) helped bring Davie back. King chipped in three points.
Walser made difference-making plays after missing the previous three games with a concussion.
“He was shaky in the first half, but he was able to get his legs underneath him,” Wallace said. “He is a good high school big man. He rebounds and defends.”
Notes: Harris did not make a field goal in the second half and settled for 24 points. He got his five second-half points from the foul line. … Stout had 23 points. Harris and Stout are the top two scorers in Rowan County. … Davie scored its most points in 62 games (79-67 over Reynolds in January of 2019). … The 161 points produced the highest-scoring Davie game since an 89-74 loss to Mt. Tabor in February of 2017. … This was the most Davie points in defeat since a 90-84 setback to West Forsyth in January of 2017. … For the season, Maddox and Hudson are averaging 18.4 and 14.1 points, respectively. Walser is third at 5.6.
Gym Becomes Crime Scene
The joy of the 49th-annual tournament came to an abrupt end about two and a half hours after the Davie-Salisbury game. In the other boys semifinal, West Rowan led No. 1 North Rowan 33-27 at halftime. That’s when gunfire in the lobby injured two people and forced officials to cancel the rest of the tournament.
Salisbury was supposed to face the West-North winner in the boys final on Dec. 30. Davie was supposed to meet the West-North loser in the third-place game.
A fight started near the concession stand. Seconds into the brawl, five or six shots were fired, sending spectators and players running for cover. A witness told the Salisbury Post that he saw two people with gunshot wounds, one who was shot in the arm and another in the leg. Salisbury Police Chief Jerry Stokes confirmed two people were shot.