Tombstone Tourist: Did anyone care when Leona Helmsley died? 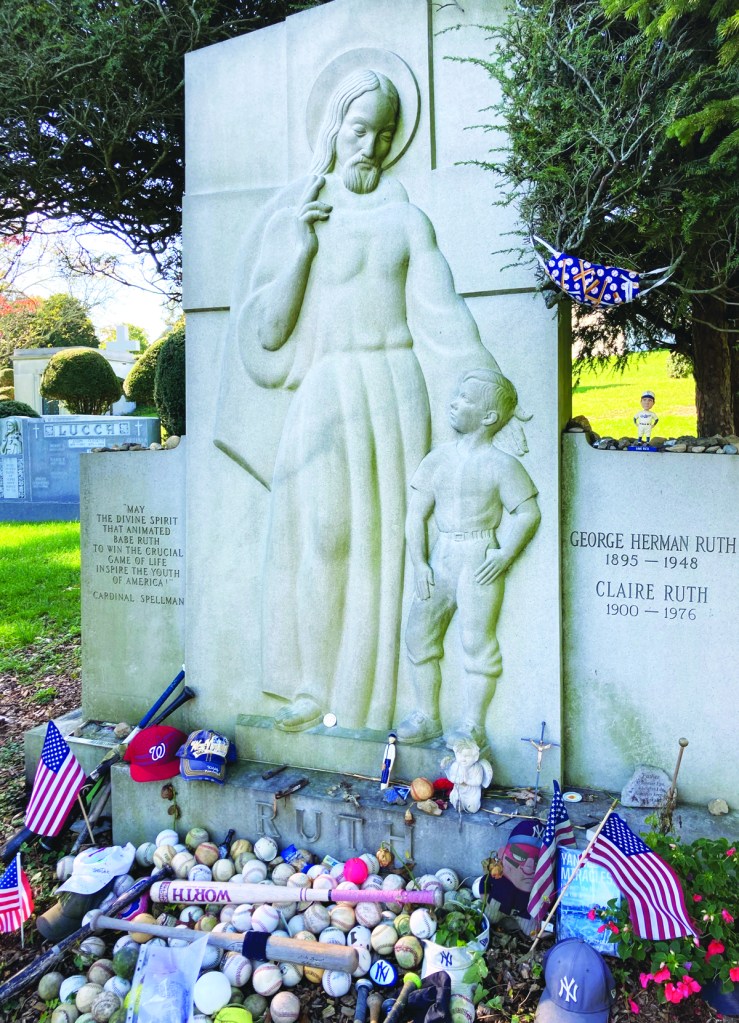 The grave site of Babe Ruth is scattered with bats and balls, including one left by this writer.

By Dwight Sparks
For the Enterprise

Do boys still dream of Babe Ruth?
Do they stride to the plate with their Louisville Sluggers, point to the outfield fence and vow to hit one out for that sick boy in the hospital?
Do boys these days even know about the best there ever was — the troubled youth from the wrong side of Baltimore, dumped by his parents at an orphanage and who learned to wield a baseball bat?
We old boys remember.
There must have been a hundred baseballs at the foot of George Herman Ruth’s grave in the Gate of Heaven Cemetery, Hawthorne, N.Y. Some have left Yankees baseball caps, wooden bats, pebbles, coins, beer bottles, rosaries, crucifixes, figurines and flags.
A fading letter hoped Babe had met the writer’s grandfather — an avid Yankees fan — in heaven.
I placed my own baseball at the grave. I was one of those little boys who dreamed of swinging the bat like the Sultan of Swat, the Great Bambino. We quickly divided into teams at recess at Farmington Elementary. There was no outfield fence, but I still pointed like Babe when I came to the plate.
When you’re young and foolish …
Elizabeth and I found Babe Ruth’s grave during the World Series. A cemetery worker reluctantly pointed us in the right direction. “I’m a Mets fan,” he apologized.
Nearby is the grave of another Yankees notable, manager Billy Martin, routinely ejected for arguing with umpires. “I may not have been the best Yankee to put on the uniform, but I was the proudest,” his epitaph reads.
We searched out one non-baseball grave in the vast cemetery, Russian composer Sergei Rachmaninoff. My piano son thundered the house for an entire year while mastering his recital piece, Prelude in C Sharp Minor.
In a whirlwind tour of New England, we added to my list of presidential graves visited — FDR, Martin Van Buren, John Adams, John Quincy Adams, Ulysses S. Grant and James Buchanan. I’m up to 21. Grant’s Tomb is the largest presidential edifice — 150 feet tall on the Hudson River in Manhattan. Buried in the small Dutch village of Kinderhook, N.Y., Van Buren’s grave is comparatively modest.
We timed our tour with a nor’easter that buffeted us with 30 mph winds in Newport, R.I., as we toured the big houses on the coast road. Breakers sprayed over the road. The nor’easter proved exciting.
We feasted on bowls of clam chowder, lobster and fish.
I’ve labeled myself a tombstone tourist.
During the pandemic, it’s the safest way to travel. Cemeteries are open. Free admission. No mask or vaccine requirements.
We went to the Sleepy Hollow, N.Y., cemetery before Halloween to pay our respects to author Washington Irving, who made his community forever famous with his stories.
Some graves attract visitors. Most don’t.
In Stamford, Conn., we visited the humble grave of Gilda Radner Wilder, the funny original cast member of Saturday Night Live. The grave was strewn with evidence of adoring fans — beads, pictures, ballet shoes, trinkets, pebbles, pennies, a Gray Goose mini-bottle. A small sign held the title of her autobiography, “I Had A Great Time.”
We also found the Parthenon-like crypt of billionaire New York City real estate mogul Leona Helmsley in Sleepy Hollow. She was labeled the “Queen of Mean” for forcing widows and the elderly from their apartments. The crypt cost a million dollars — not so much considering her resources. Her will designated $12 million for her dog.
There were no beads, pictures, trinkets, pebbles, pennies or baseballs scattered at the Helmsley grave — no evidence of love … or that anyone cared.