South wrestling clicking on all cylinders 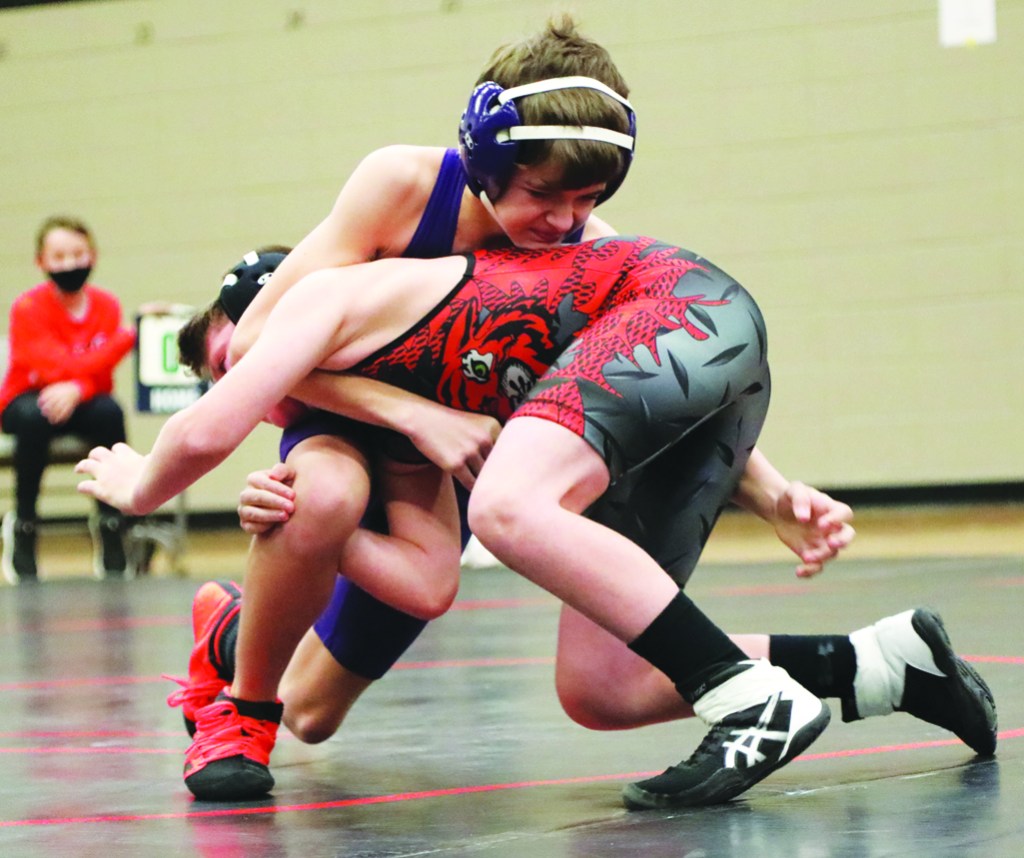 The Ellis-South Davie wrestling match was a thorough demolition by the Tigers, who captured the first eight weight classes on the way to a 72-28 decision over the visiting Jaguars on Dec. 14.
Austin Samuels (pin at 90), Zion Lyons (pin at 98), Aidan Szewczyk (pin at 106), TJ Douglas (pin at 113), Jeremyah Hicks (pin at 120), Laz Smith (pin at 126) and Memphis Nunn (pin at 132) staked South to a 48-0 lead. The match started with a forfeit to South’s Zeb Stewart at 83.
“That was probably the best we’ve wrestled,” South coach Russell Hilton said after South (5-4) beat Ellis (3-2) for the seventh time in eight meetings. “Things are clicking. We’re getting better at practice and it’s carrying over to matches.”
Szewczyk got a pin because of course he did. All six of the star seventh grader’s matches have been like that. He came in fresh off a trip to Virginia Beach for the Holiday Duals.
“He wrestled with some of the best in the country again,” Hilton said. “He puts on a clinic. He runs up the score; he was winning 7-0 within a minute. There’s not much locally that can stop him.”
J. Hicks and Nunn had shining moments. After Hicks pulled off an upset, Nunn bumped up to 132 – after spending all season at 120 – and met the challenge.
“My starting 120 was three pounds overweight, so Jeremyah had to fill in,” Hilton said. “With Memphis moving up two weight classes, that was kind of a shock. I thought we might lose both of those (120 and 132).”
The Jaguars had something to cheer about when they got to the meat of their lineup, 138 through 160. They have a fearsome foursome in Elliott Gould (138), Elijah Chaffin (145), AJ Sweet (152) and Dylan Miller (160). Three of them pinned and Chaffin won a major decision. Ellis’ other win was a pin by Luis Salas at 195.
All five are undefeated. Gould, Chaffin, Sweet and Miller are 5-0, while Salas is 4-0.
“Elliott did what he does and got a pin in the first period,” Ellis assistant coach Andrew Marshall said. “I won’t be shocked if he’s in the lineup at Davie as a sophomore. Dylan is a hammer.”
“Gould and Chaffin are tough,” Hilton said. “Chaffin has been wrestling at Combat. He’s good on his feet, he’s very aggressive and he’s good on top.”
After South’s Kaden Sagendorf got a pin at 220, Jakob Alexander of South and Omar Varcena Guadarrama of Ellis closed the evening by giving fans three periods of drama at heavyweight. Guadarrama stood toe to toe with the unbeaten Tiger, leading 2-1 through the second period, before getting pinned.
“Jakob pinned a big, aggressive kid,” Hilton said. “They were battling. Jakob puts him on his back (in the third) and Guadarrama gets out.”
Ellis forfeited to Maddox Creason and Maddux Crowe at 170 and 182.
Alexander (7-0) and Douglas (5-0) are also unbeaten for South. Alexander has three pins and four forfeits, while Douglas has five pins. Smith is 5-1 with five pins and Creason is 7-2.
“TJ is really good on his feet,” Hilton said. “He’s super, super scrappy.”
Ellis 80, NCLA 6
A week earlier, the Jaguars traveled to North Carolina Leadership Academy and claimed 14 of 15 weight classes.
Daniel Hennessey (83), Luke Hannah (98), Sweet (152) and Miller (160) had pins, while Carter Hoots (106) won a decision.
The Falcons handed over nine forfeits.