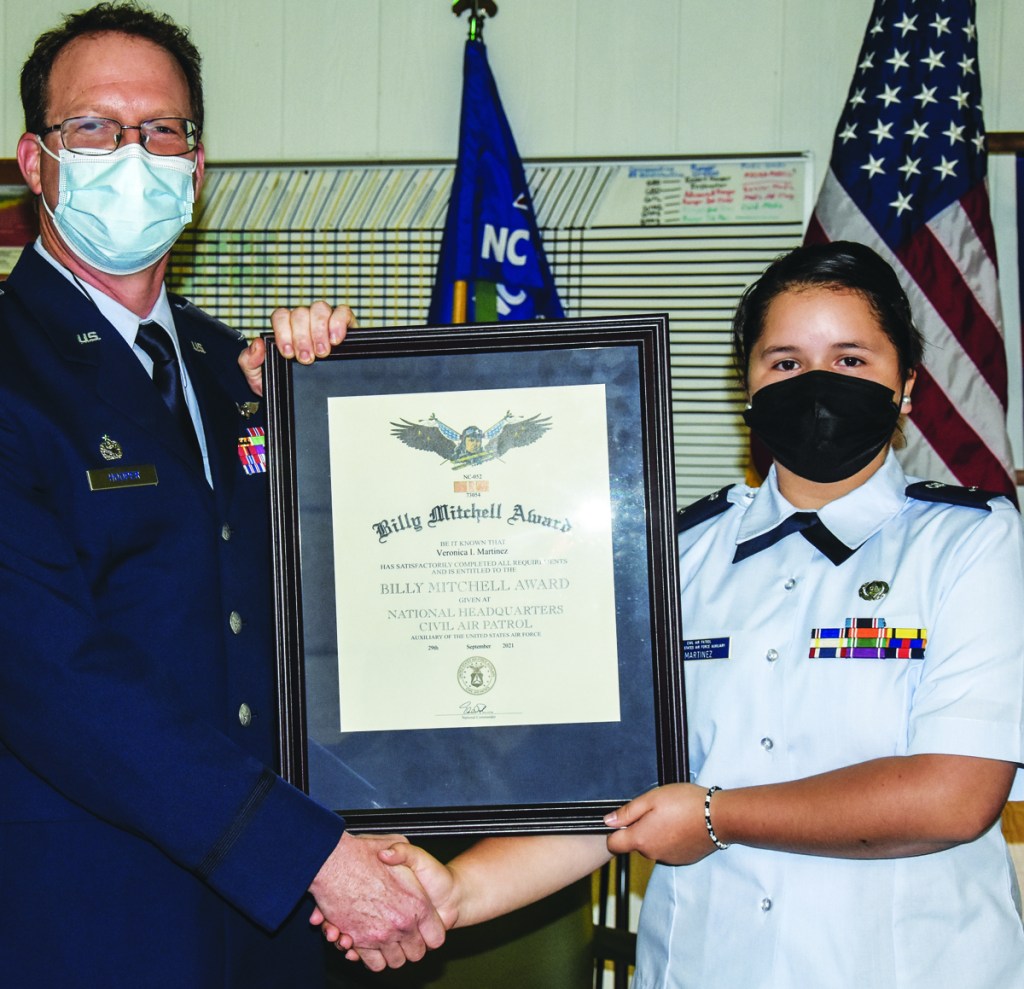 Major Chad Hooper with Cadet 2d Lt. Veronica Martinez after presenting her with the award.

By Lt. Deborah Leighton
For the Enterprise

At the Nov. 30 Civil Air Patrol (CAP) Sugar Valley Composite Squadron Awards Night, Cadet 2d Lt. Veronica Martinez received the Brigadier General Billy Mitchell Award, presented by the N.C. Wing Group 4 Commander, Major Chad Hooper.
After achieving this milestone in the cadet program, Martinez also assumed the position of Squadron Cadet Commander.
“I am so grateful for what this program has done for me,” she said. “I wouldn’t be where I am today if it wasn’t for the Civil Air Patrol. Throughout my almost four-year journey, I’ve only been pushed to become the best I can be. The knowledge I have gained has greatly impacted my character and helped build an outstanding sense of leadership. I would never trade my CAP experiences for anything. Special thanks to all of those who have helped me make it this far and who have always encouraged me, in and outside of CAP,” she said.
Martinez joined the Sugar Valley squadron in July 2018. Since becoming a CAP cadet, she has attended two encampments and four Ranger training weekends and served in staff positions for three Ranger training weekends. She received the Squadron’s Cadet of the Year award in January 2020.
Some of her squadron positions included Flight Sergeant in 2019, Cadet Public Affairs Officer, Cadet Safety Officer in 2020, and Cadet Commander currently.
In 2021, she served as the NC Wing Cadet Advisory Council (CAC) Primary Representative for the Sugar Valley Composite Squadron.
Along with Civil Air Patrol activities, Martinez plays softball, Brazilian jiu jitsu, and is a certified advanced open water scuba diver.
What motivates her: “So that we may boldly say, The Lord is my helper, and I will not fear what man shall do unto me.” – Hebrews 13:6.
The Billy Mitchell Award is the first milestone in Civil Air Patrol’s Cadet Program and is awarded cadets after completion of the first eight achievements. To earn this award cadets must also pass a comprehensive test on leadership theory and aerospace topics and pass physical training requirements.
Cadets achieving this milestone are eligible for CAP scholarships and CAP National special activity opportunities.
Civil Air Patrol is the longtime auxiliary of the U.S. Air Force and as such is a valued member of its Total Force.
CAP operates a fleet of 560 single-engine aircraft and more than 2,100 small Unmanned Aircraft Systems (sUAS). It performs about 90 percent of continental U.S. inland search and rescue missions as tasked by the Air Force Rescue Coordination Center and is credited by the AFRCC with saving an average of 82 lives annually.
CAP’s 56,000 members also perform homeland security, disaster relief and drug interdiction missions at the request of federal, state and local agencies.
Operating as a nonprofit organization, CAP also plays a leading role in STEM/aerospace education, and its members serve as mentors to more than 23,000 young people participating in CAP’s Cadet Programs.
Visit www.CAP.News or www.GoCivilAirPatrol.com for more information.