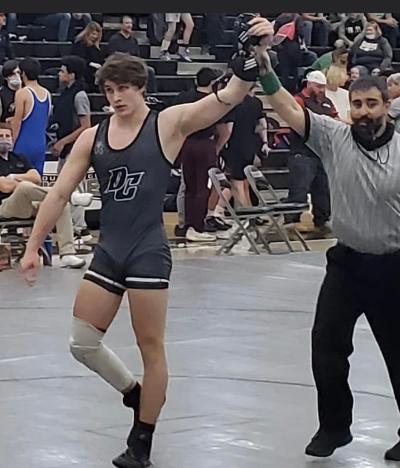 On the surface, it looks like Davie’s wrestling team had a horrid weekend at Newton-Conover in the Red Devil Super Duals on Dec. 10-11.
The War Eagles lost seven of eight matches. That would be alarming if they’d had anything close to a full lineup, but perspective is needed. They were missing a large chunk of their lineup. Undermined by sickness and injuries, they forfeited five weight classes against Foard, four against Landstown (Virginia Beach, Va.), four against Mooresville and six against Avery, Newton-Conover, Hickory Ridge and Bandys.
It was impossible to overcome that many voids. Davie did well to win even one match, which it did against North Gaston.
“On Saturday, we were forfeiting at 106, 113, 120, 126, 145 and 182,” coach Perry Long said. “We couldn’t win like that.”
The War Eagles wrestled four times each day, opening with a 57-15 loss to Foard. Lane Hill (132) and Jack Jarvis (170) had pins and Collin Bailey (152) won a decision.
That’s one opponent Davie might not have enough talent for even at full strength.
“Foard is good, man,” Long said. “When I tell you they’re good, they’re good.”
The War Eagles trailed Landstown 40-22 with three weight classes remaining. Bailey, Isaac Webb (160) and Jarvis all came through with second-period pins to force a tie at 40. Davie, however, lost on criteria because it had more forfeits than the Eagles (4-0).
“We got in the criteria book,” Long said. “We had more pins, but we lost because of forfeits.”
Earlier against Landstown, Charlie Frye (195), Brysen Godbey (220) and Ryder Strickland (285) had pins and Hill won by major decision.
The next match was a 46-21 loss to Mooresville. Godbey and Lawson Hire (120) had pins, while Hill, Webb and Vance Visser (195) won decisions.
Visser’s was a jaw-dropper. “They didn’t see that happening,” Long said.
Davie ended Friday by erasing North Gaston’s 21-0 lead and beating the Wildcats 39-27.
Hill, Bailey, Jarvis and Godbey produced pins, Webb won a decision and Reid Nail and Visser took forfeits.
Davie was behind 27-12 before scoring 27 unanswered points. Pins by Hill, Bailey, Jarvis and Godbey, a decision by Webb and the two forfeits allowed Davie to salvage a 1-3 day.
On Saturday, the War Eagles fell to Avery, Newton-Conover, Hickory Ridge and Bandys. Again we note: They handed over 36 free points to all four. The 1-7 showing over two days left Davie’s overall record at 7-8.
You can’t help but empathize for a team that started 6-1 before so many guys became sidelined for various reasons. Hire injured his ankle Friday and saw no action Saturday. Hunter Testa was sick. Sam Collins has come down with mono and is out until Jan. 6. Max McKnight was sick and couldn’t make weight at 126. It goes on and on.
Long is just glad this happened in December instead of late January/early February.
“I don’t care if people don’t think we’re any good right now – as long as we start rolling at conference time,” he said. “If we can get everybody back, we’re just as good as anybody in the state (in 4-A). I like being the sleeper.”